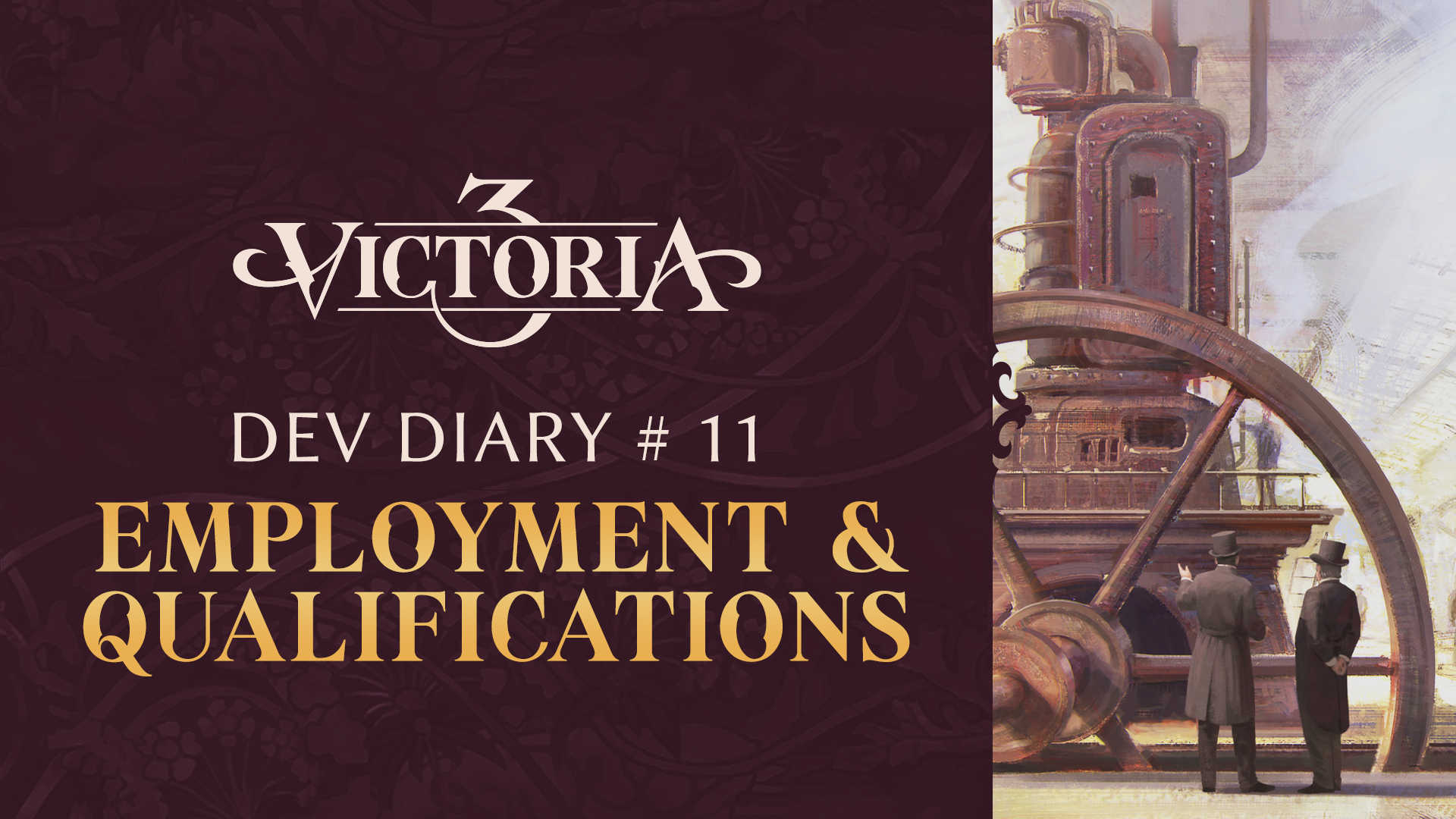 Happy Thursday and welcome to another deep-dive into the guts of Victoria 3’s economic machinery. This week we will be talking about Pop Professions, specifically how and why Pops change Profession. While this is an automatic process, the mechanics of it is still crucial knowledge to keep in the back of your head when building your society. Perhaps you want to ensure the population in one of your states are able to take on Machinist jobs before embarking on a rapid industrialization project there, or perhaps you want to ensure you don’t accidentally enable too much social mobility in a country already prone to uprisings against their true and lawful King.

Our approach here differs a bit from previous games. Victoria 1 and 2 has the concept of a “Pop Type”, a fundamental property of Pops in those games that defines most aspects of their existence – what function they perform in society, what goods they need to survive vs. what goods they desire, what ideologies they espouse, etcetera. Pops in Victoria 2 autonomously change into other types over time depending on their finances and the various needs and aspects of the country. Providing access to luxury goods in your country permits Pops to promote more easily. Generally speaking, higher-tier Pops will provide better bonuses for your country as different Pop Types perform different functions. By manufacturing or importing special goods and educating your population you would turn your simple, backwards Pops into advanced, progressive types in ideal ratios, which maximizes these bonuses to increase your competitive advantage. 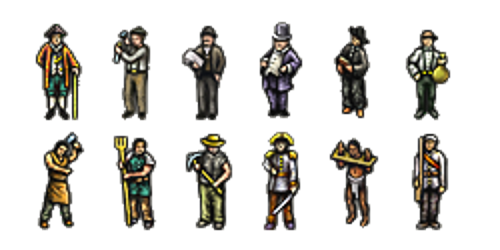 Victoria 3 Pops instead have Professions. These are in some ways similar to “Pop Type”, but the ideal ratios and economic functions of those Professions differ based on the building they’re employed in and the Production Methods activated. The fundamental difference between these two approaches become clear when considering the Bureaucrat Pop Type/Profession in Victoria 2 and 3. In both games, Bureaucrats increase a country’s administrative ability. But in Victoria 2 Pops promote into Bureaucrats independently in relation to the amount of administrative spending the player sets, while in Victoria 3 Pops will only become Bureaucrats if there are available Bureaucrat jobs in Government buildings, usually as a result of the player actively expanding Government Administrations. 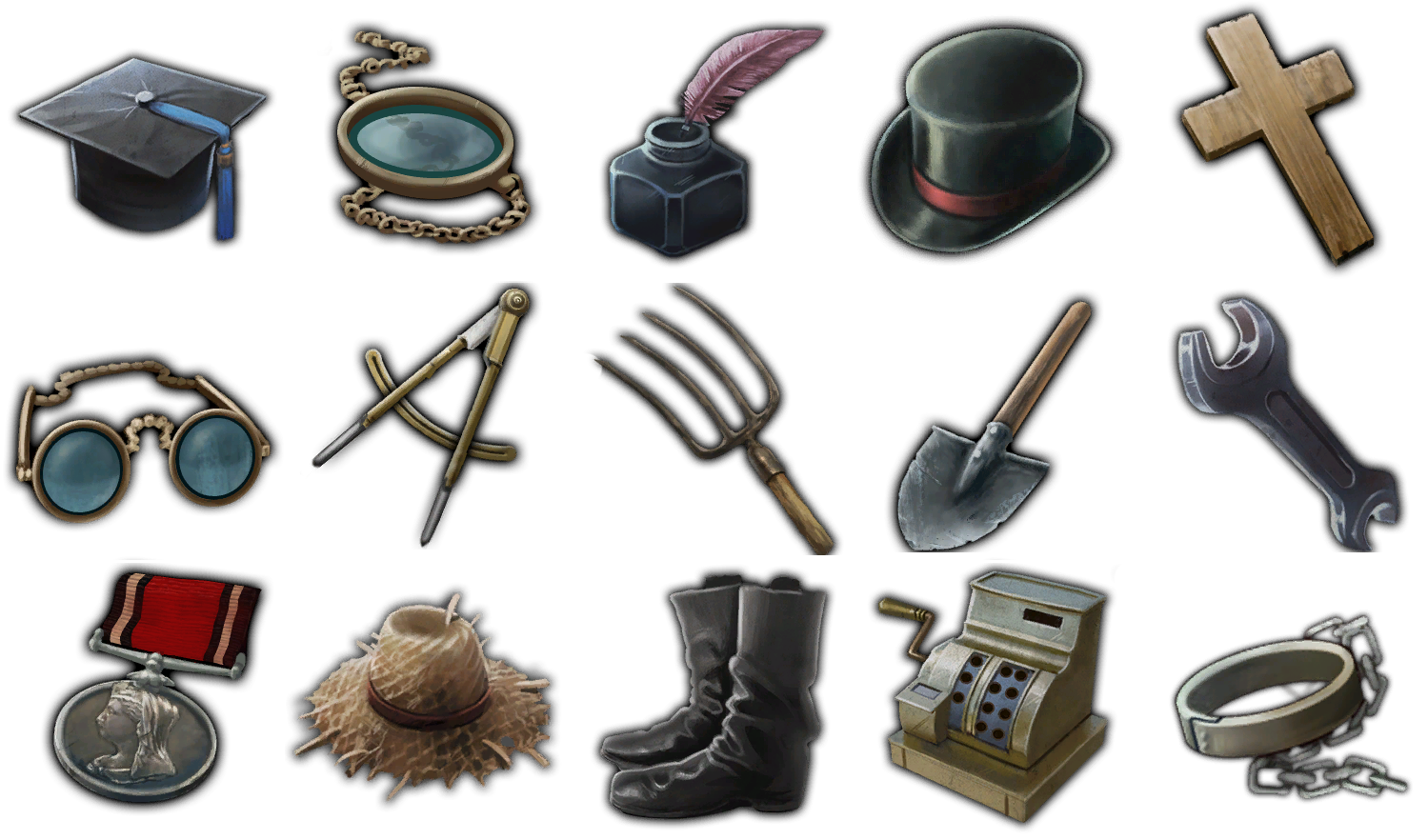 The latter approach gives the player more control over where these job opportunities are created, and combined with Production Methods cause demographic shifts to have stronger, more localized effects that are easier to predict and understand. It’s also more flexible, permitting the same Profession to cause different effects in different Buildings given different Production Methods. So in Victoria 3 higher-paid Pops don’t by their very nature perform a more valuable societal function than lower-paid Pops – rather, each acts as a crucial part of a Production Method’s ‘recipe’. Each of these roles require the others to be effective – without enough Laborers to shovel coal the engines the Machinists maintain stay dormant, and without seamstresses to work the sewing machines the Shopkeepers don’t have any clothes to sell.

Buildings adjust their wages over time in order to achieve full employment with minimal wage costs. As employment increases, so does the Throughput – the degree by which the building consumes input goods and produces output goods. By the laws of supply and demand, this makes a building less profitable per capita the closer to full employment it gets, so at first blush it might appear irrational for a building to pay more wages just to reduce their margins. But since a “building” does not represent a single factory but rather a whole industrial sector across a large area, and we assume the individual businesses in that sector compete with each other rather than engage in cartel behavior to extort consumers, this adjustment of wages to maximize employment makes sense. However, buildings won’t increase wages due to labor competition if this would cause them to go into deficit, so there’s little point to expanding industries beyond the point where they’re profitable.

Employees are hired into available jobs from the pool of Pops that already exist in the state, but unless they’re unemployed these Pops will already have a job somewhere doing something else. Pops can be hired under two conditions: first, they must be offered a measurably higher wage than the wage they’re currently getting from their current employment. Second, unless they already work as the required Profession in another building, they must also meet the Qualifications of that Profession to change into it.

These Steel Mills don’t pay as well as the Arms Industries, but they do seem to offer better terms than the Textile Mills and resource industries in the same state – with the notable exception of Fishing Wharves, who also need Machinists to service their trawlers. 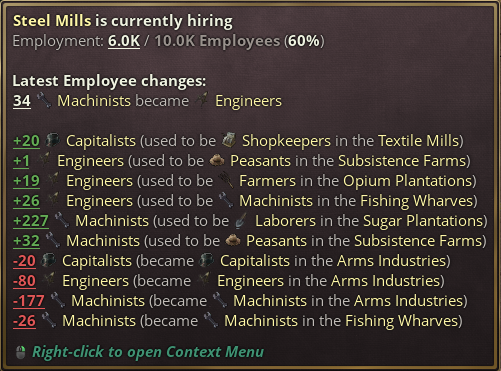 Wages are set by individual buildings in response to market conditions. A building that is losing money will decrease wages until it’s back in the black. A building that has open jobs it can’t seem to fill will raise wages until it either fills the necessary positions or runs out of excess profits. As a result, different buildings in the same state will compete for the available workforce. What this means in practice is that a large population with the necessary Qualifications to perform all the jobs being created in the state will keep wages depressed and profits high. Only when industries are large or advanced enough that they need to compete with each other for a limited pool of qualified workers are wages forced to rise. This rise in wages also comes with increased consumption, which increases demand for goods and services that some of the same buildings may profit from in the end.

A Pop’s Qualifications measure how many of its workforce qualify for certain Professions, and updates monthly depending on how well their current properties match up to the expectations of the Profession in question. For example, at least a basic education level is required to become a Machinist while a much higher one is required to become an Engineer. Conversely, the ability to become an Aristocrat is less about education and more about social class and wealth. Buildings won’t hire Pops who don’t meet the Qualifications for the Profession in question.

These 981 Machinists qualify to become Engineers at a rate of 4.08 per month. Their Literacy is nothing to write home about but they at least meet the cut-off of 20%, aren’t starving to death, and benefit substantially from already working in an adjacent field. All factors and numbers are work-in-progress.

If some Paper Mills required more Engineers and this Pop was being considered, only the amount of qualified Engineers they’ve accumulated so far could be hired. Currently that is only 85 (not shown). If those 85 were all hired, this Pop would then end up with only 896 members left in the workforce of which 0 now qualify to become Engineers. Since all recently hired Engineers used to be Machinists, all 85 retain their Machinist Qualifications. Furthermore, if 512 members of this Pop qualified to be Farmers before the hire (52%), of the 85 of them who were newly promoted to Engineers, 44 of these new Engineers are also qualified to become Farmers.

To be considered for a “job” as Aristocrat a Pop must have at least moderate Wealth, and the more Wealth they have the faster they will develop this potential. Unlike many other jobs Literacy is not a requirement for being accepted into the aristocracy, but an education does make it easier. Bureaucrats and Officers have an easier time becoming Aristocrats than other members of society, while Pops who suffer discrimination on account of their culture have a much harder time. Finally, if a Pop does not meet the minimum Wealth requirement, they actually devolve any prior potential for becoming Aristocrats. This means that down-and-out former nobles robbed of their land and forced to go unemployed or (perish the thought) become a wage laborer will – over time – lose their ability to return to their former social class. All factors and numbers are work-in-progress. 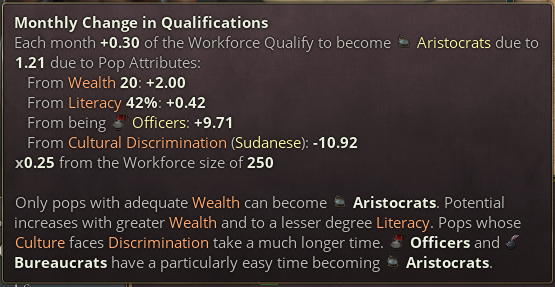 Like all Pop attributes, Qualifications follow the Pops as they split, merge, move between buildings, migrate, and die. If you had previously developed a lot of potential Bureaucrats in your country but ran into budgetary problems and had to shut down your schools, over time those Pops who have already developed the Qualifications to become Bureaucrats will die off and not be replaced by newly educated ones. If your Capitalists in a given state had been underpaying their local discriminated employees to the degree that nobody gained the Qualifications to take over for them, and then some of those Capitalists move away to operate a newly opened Iron Mine in the next state over, rather than promoting some of the local discriminated Laborers to the newly opened jobs they will simply leave the spots open (and the mines underproducing) until some qualified Capitalists move in from elsewhere to take over.

Qualifications are entirely moddable by simply providing the computational factors that should go into determining how the value develops each month. If you want to make a mod to split up the Clergymen Profession into individual variants for each Religion in the game, you could make the Imam Profession dependent on the Pop being Sunni or Shi’ite. If you wanted Aristocrat Qualification development to be highly dependent on the amount of unproductive Arable Land in the state the Pop lives in, you could do that. An event option or Decision that makes it faster and easier to educate Engineers but harder to educate Officers for the next 10 years? Absolutely.

A breakdown of all Pops in Lower Egypt that qualify to become Engineers. Of course, any openings will be offered to existing Engineers first, and not all of the remaining qualified Pops would actually be interested in the job – though if it was lucrative enough, perhaps some Aristocrats on a failing Subsistence Farm would consider a career change. 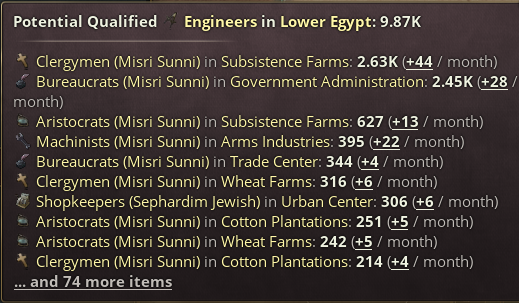 The intent of Qualifications is to signal to a player what capacity for employment they have available among any subset of their population. They cannot, for example, conquer a state filled with under-educated people they also legally discriminate against and expect to immediately build up a cutting-edge manufacturing- and trade center there. These efforts will be throttled by their inability to employ the locals into highly qualified positions, meaning they have to wait for members of their already qualified workforce to migrate there from the old country to take on any high-status positions created for them. But by building out their education system, paying Bureaucracy to extend their administrative reach to the new state through incorporation, and changing their Laws to extend citizenship to these new residents, they can start to build this capacity also in the locals.

In summary, Qualifications is the mechanism by which access to education and your stance on discrimination – in addition to many other factors – impact your ability to expand different parts of your society. It is also the mechanism that sorts Pops logically into the economic (and thereby political) niches you carve out as you expand, ensuring your laws and economic conditions inform the social mobility of Pops based on who they are. It’s quite subtle, and you might not even notice it’s there – until you run into the challenges caused by rapid industrialization, mass migration, conquests, colonization, and other drastic population shifts.

That is all for this week! Next Thursday we will finally get into how all this economic activity translates into revenue streams for you, when Martin presents the mechanics governing the Treasury and national debt.