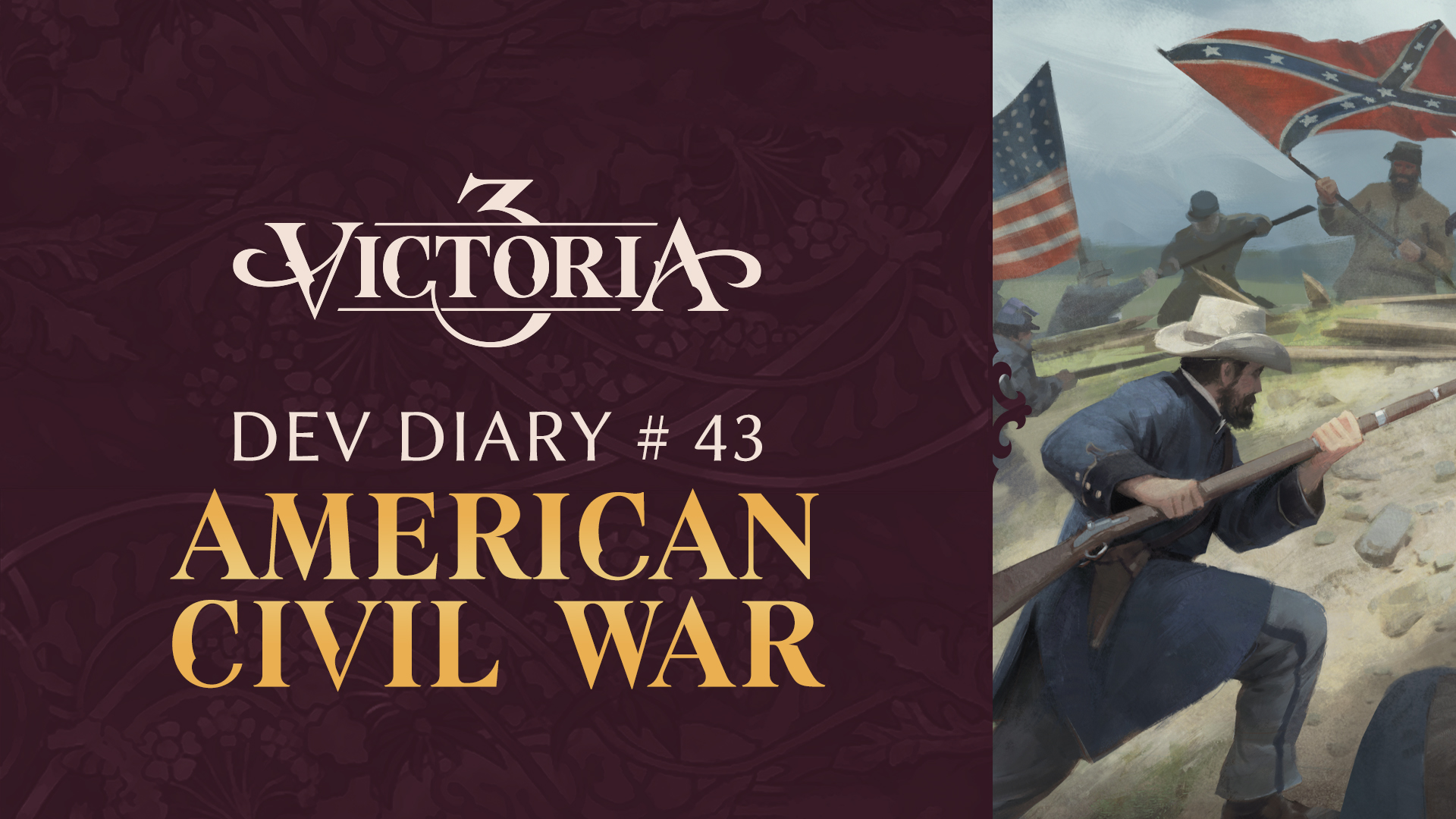 Hello folks, welcome to another dev diary for Victoria 3! This week we’re going to talk about the American Civil War, a dark period in the history of the United States.

Turmoil had been building under the surface of the United States for decades prior to the outbreak of the Civil War, with tension growing increasingly violent particularly in the 1850s. In 1861, several states voted to secede from the Union, and established the Confederate States of America. The Union and the Confederacy fought for four years, to 1865. After the surrender of the CSA, the Union reincorporated the states of the former Confederacy and initiated an era generally known as Reconstruction, a period of ambition, domestic unrest, and, ultimately, a failure to complete some of the most significant social reforms instigated in the wake of the CSA’s defeat. The efforts and failures of Reconstruction resulted in Jim Crow laws and the promise of racial equality becoming a generations-long struggle that has carried on well past the end of the Victorian era.

Let’s get something established first before we dive into the game: Slavery is central to the Civil War. The authors of secession did not dance around this point. The institution of slavery was singled out time and time again by the people seceding from the Union in their reasons for secession, during their debates over secession, and then throughout the Civil War itself. After the war, rhetoric shifted as the Lost Cause myth developed, but before and during the war slavery was declared as a central element in the rebellion time and time again.

This interpretation of history is built on solid foundations with ample evidence. Victoria 3 uses this approach as its basis for the American Civil War. 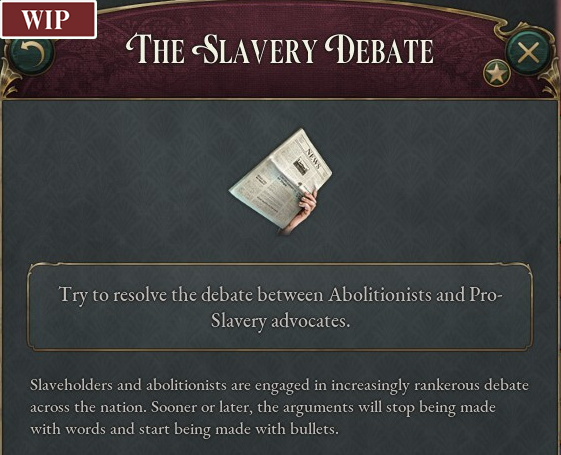 The United States of America begins the game with a Journal Entry already underway. In the first years of the game, and historically, the 1830s were already rife with national debate over the issue of slavery, although violence was only just beginning to escalate. At this point on the national level, all the United States can try to do is balance the pressures of abolitionists and pro-slavery advocates, and either limit escalation or come down firmly on the side of one camp or another.

Even a policy of appeasement and reconciliation will not stop rising tensions entirely. Some events will ratchet up tensions regardless of whatever option is chosen; the main difference in choices is determining who will become more mad and who will be more mollified by ensuing government actions.

Iowa has become the front line in the fight over slavery, and will be struck with unrest regardless of the choice picked. 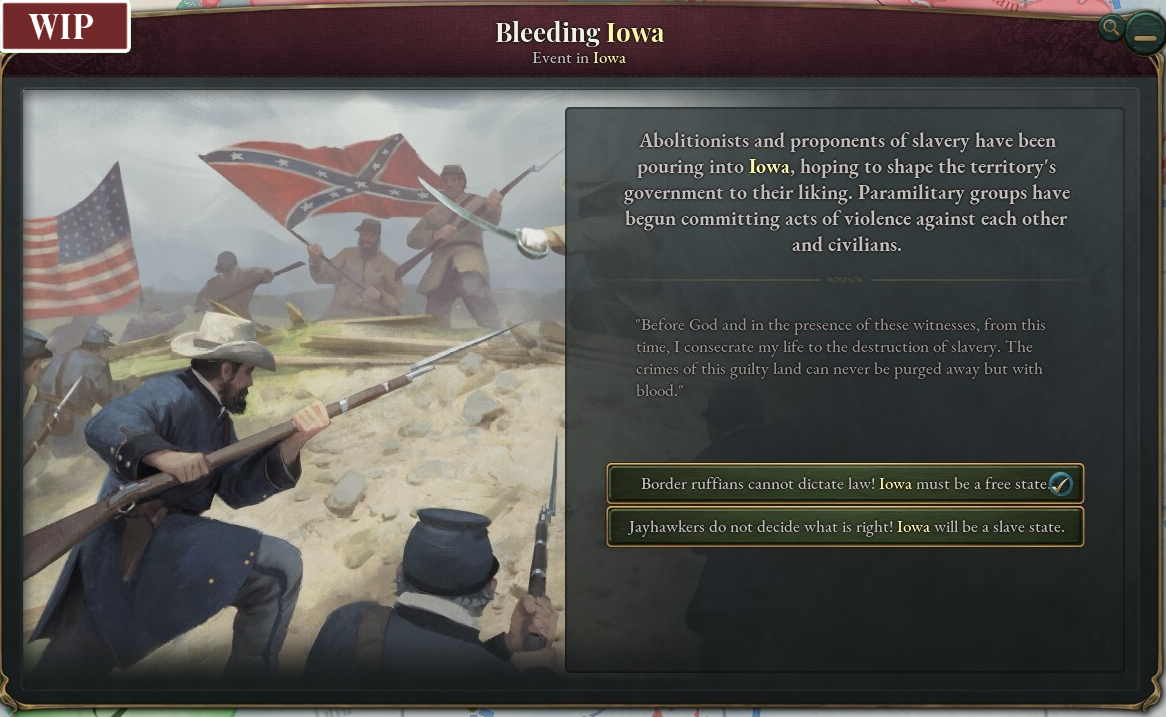 As tensions rise, violence will rise, and events will become more and more polarizing. Early events may talk about a single senator’s words, or a single death in a city, but as the issue festers, things will just get worse and worse until something gives way. Newspaper debates will turn into arguments on the floor of the Senate, then those arguments will turn into canings, and people will stop campaigning with pamphlets and start campaigning with paramilitaries.

Attempts to ban slavery are more likely to create a reactionary movement in the United States. 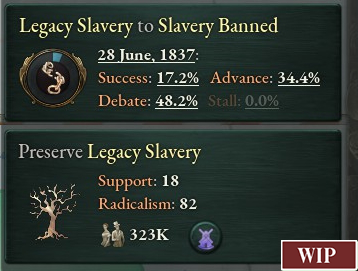 The most straightforward way to end the debate over slavery may be to just end it, but this carries enormous risks – political movements may emerge in reaction to the potential passage of these laws. Of course, not banning slavery may also lead to a movement emerging explicitly agitating for the abolition of slavery, and that has its own set of challenges.

Triggering the Civil War early caused a slightly different set of states to secede. Florida simply didn’t have enough pro-slavery supporters here to join the pre-war movement that formed the basis of the CSA. 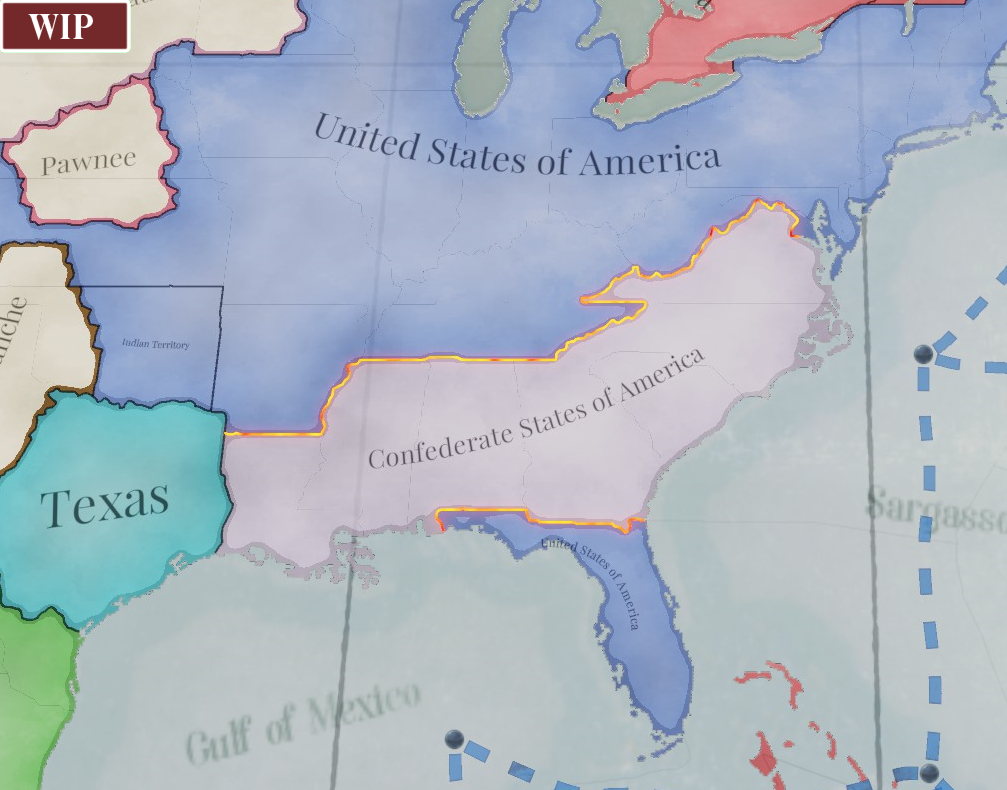 This is where we’ve decided to engage with our own revolution mechanics in order to create a more dynamic American Civil War. If the Slavery Debate Journal Entry is active when a revolution over slavery erupts, the revolutionary government will turn into a secessionist government. Secession is determined by what states join the radicalized movements for preserving slavery or banning slavery, which means the strength of the secessionist government will vary depending on which IGs align themselves with the radicalized movement prior to the outbreak of revolution. If pro-slavery Interest Groups had been empowered again and again prior to their radicalization and revolution, then secessionists will control a large number of states, but if those same Interest Groups had been suppressed and their influence limited time and time again, then their government will be far smaller when war breaks out.

Of course there’s a train-centered event. 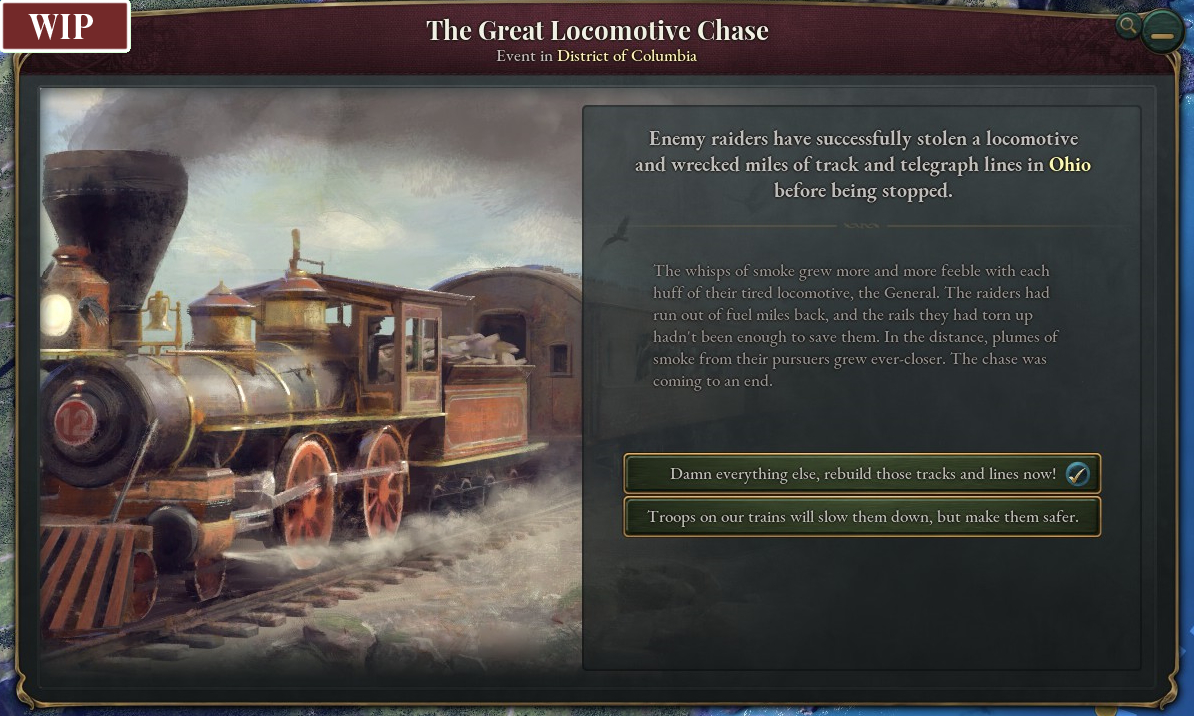 The war itself has its own incidents that can complicate the pursuit of victory or give some unique opportunities. Raiders will jump back and forth across the border, causing chaos, while Unionist sympathizers in secessionist-held areas and secessionist sympathizers in Union-held areas will challenge the authority of local governments as long as the war still burns. If the secessionists are pro-slavery but the Union has not finished enacting abolition yet, the country will have a special change to radically hasten the change in law through a certain proclamation.

The war itself plays out the same way

Reconstruction varies depending on how the Civil War went. 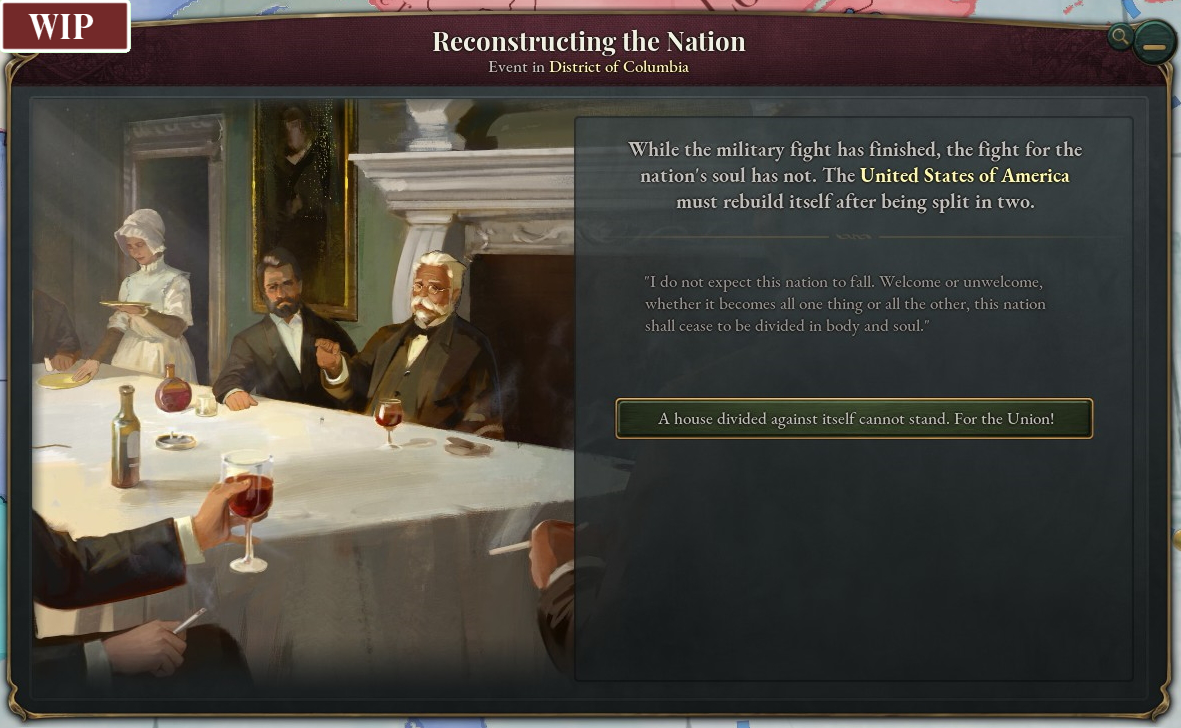 Reconstruction is a long and varied process. Depending on who fought, what laws were passed, and the general shape of the United States at war’s end, different journal entries will spawn. Establishing the Freedmen’s Bureau and pursuing the cause of equality only makes sense if you fought against slavery. Reconciling the South only makes sense if the South was the part of the country that rebelled. Conversely, it’s possible to end up with multiple goals for Reconstruction that end up conflicting.

Escalating violence is still a threat, even after the Civil War comes and goes. 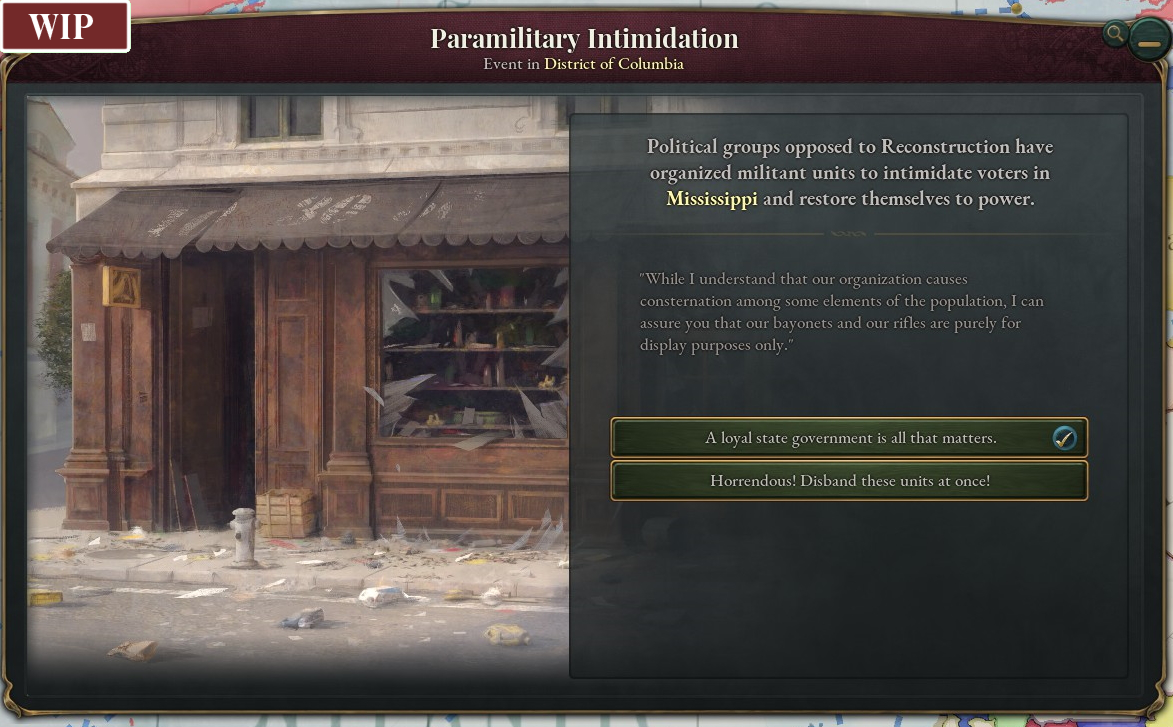 Reconstruction will be ugly. Historically, it wasn’t a clean and smooth process, and in the game it’s not a clean and smooth process. There was a struggle to balance the ambitions of Reconstruction against the resistance of a reactionary coalition that sought to restore their antebellum political power and impose a vision of racial supremacy upon society. Pursuing egalitarian measures will alienate these people and related groups, which may make governance more difficult and more expensive, while currying favor with them will undercut the foundations of Reconstruction and create another alienated population that will have to be contended with for the rest of the game. Every step is fraught with challenges to the government and to the welfare of the people; Reconstruction will be rough.

Frontier justice is a tricky thing. 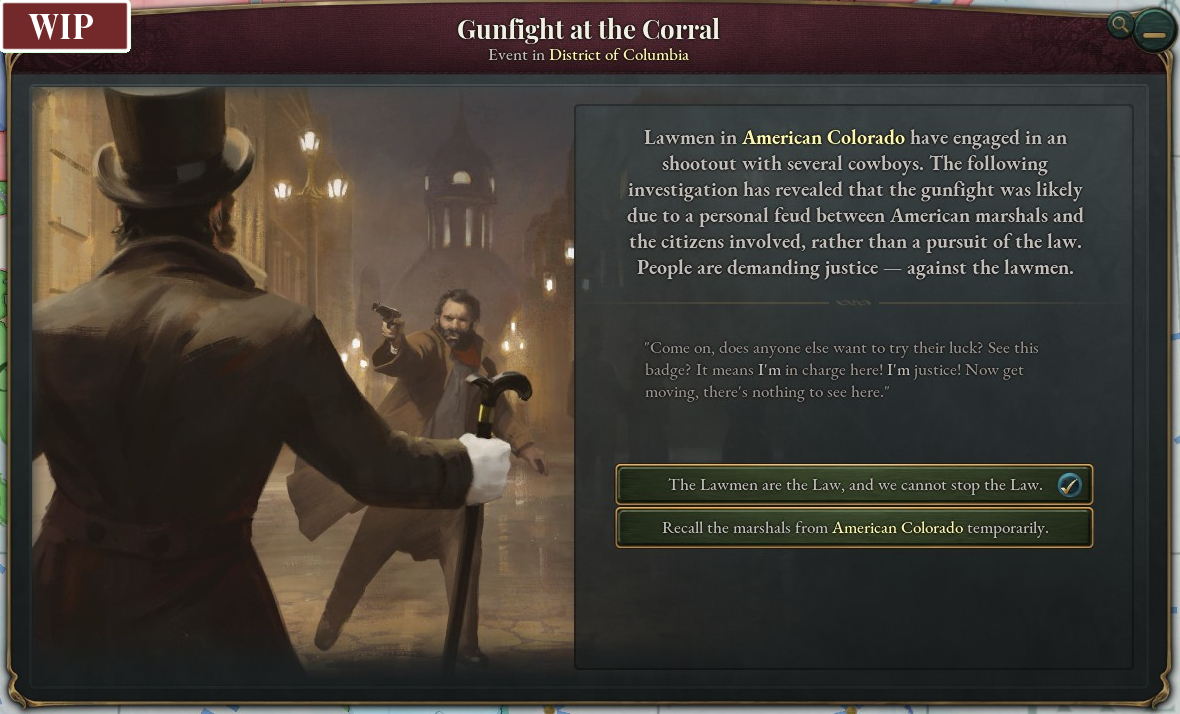 Not all postwar turmoil will be right where the fighting happened. Knock-on effects of the Civil War will be felt across the nation, from the very center of government to the furthest tendrils of the frontier. It’s up to you, the player, to decide how the country will face all these myriad challenges. What kind of America do you want to create?

How’s that for something to stew on for a week? Next time, we’re going to talk more about how you can fight battles, both in the American Civil War and with wars in general, with the one and only KaiserJohan!