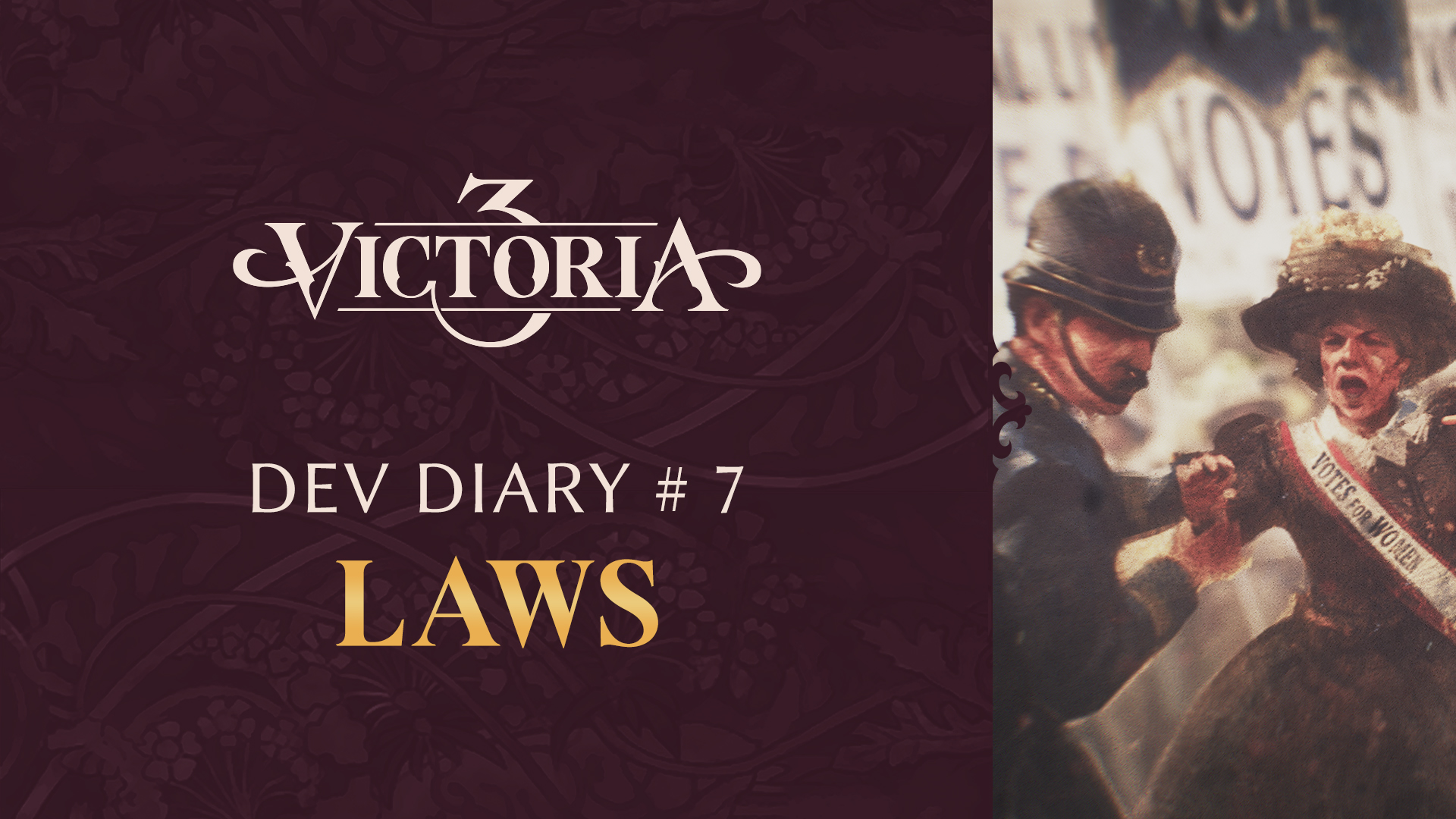 After a couple weeks vacation, we’ve now returned to our usual weekly dev diary schedule! Today we will be diving deeper into Victoria’s politics to talk about Laws. Legal reform in your country creates different political, economic, and social conditions for your Pops, which over time changes the fabric of your society. This change can be slow and incremental, or fast and revolutionary – sometimes literally.

There are three major categories of Laws with seven sub-categories in each, which themselves contain up to half a dozen specific Law options. As always everything here is being heavily iterated upon, including these sub-categories, so the laws you see at release will not exactly match what we’re telling you here!

Power Structure
These Laws determine who is in control of different aspects of your country. It includes fundamental Governance Principles such as Monarchy and Parliamentary Republic, which determine who your Head of State is and what kind of powers they wield. Distribution of Power ranges from Autocracy and Oligarchy through various extensions of the voting franchise all the way to Universal Suffrage. Citizenship and Church and State Laws govern which Pops suffer legal discrimination in your country due to their culture or religion. The principles on which your Bureaucracy is run – such as hereditary or elected positions for bureaucrats – determine how expensive it is to keep track of each citizen and how much Institutions cost to run, but also directly benefit some groups over others. Conscription lets you raise a part of your civilian workforce as soldiers in times of war, and Internal Security governs how the Home Affairs anti-insurgent Institution works.

The Power Structure Laws of a typical European nation after having made a few strides towards liberalization. The numbers in green refers to the number of alternative Laws currently available to be enacted. This indicator is used throughout the UI to reveal how many options a sub-menu has without having to open it. 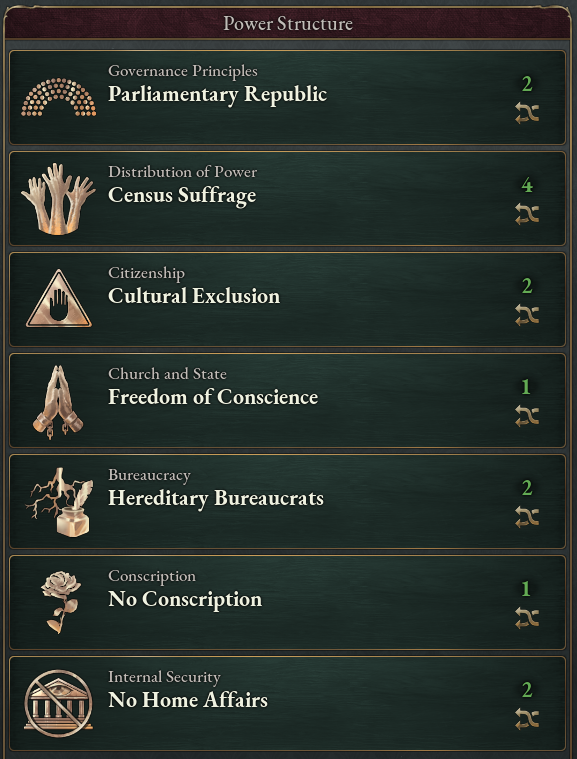 Economy
This set of Laws define where your treasury’s money comes from and how it can be spent. Your Economic System is crucial – this governs whether your country operates on principles of Mercantilism, Isolationism, or Free Trade, among others. Income Tax determines which Pops should be taxed and what range of tax burden is appropriate. No Income Tax at all is of course an option, and legislation to such effect will make some Pops both rich and happy! Poll Taxation, or levying a fixed tax per head, is another option primarily used in less industrialized societies. (There are other avenues of taxation as well, but these are the ones driven by legislation.) Finally, you can choose what form the Institutions of Colonization, Policing, Education System, and Health System will take in your country. For example, you can keep government spending under control by instituting Charity Hospitals, which have limited effect and boost the power of the clergy, or you could pass a Public Health Insurance Law which is costlier but can have a greater impact on the health of the masses.

Payroll Taxes require reasonable lower-class wages and a centralized population to pay off, but if so can form the economic basis for a budding welfare system as seen here. A tax system based on Levying might be more lucrative in countries with huge Peasant populations. 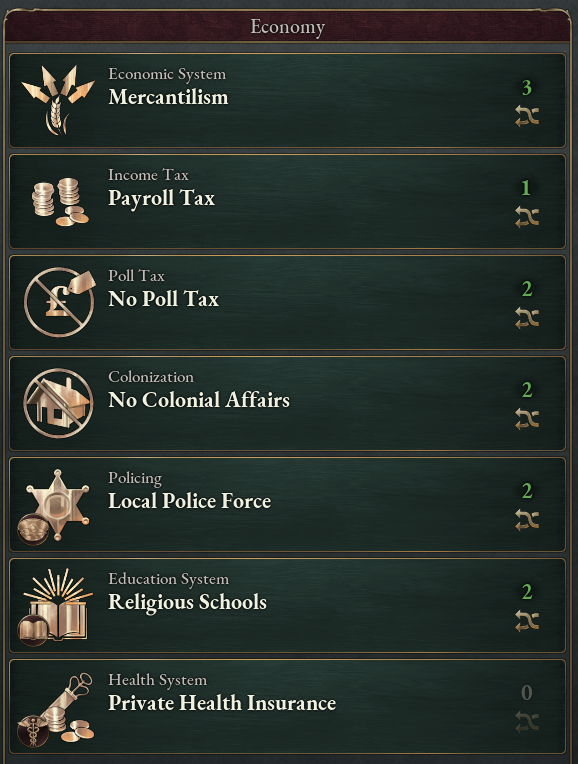 Human Rights
Enshrining the rights of the individual was a hallmark of the era. These Laws define how your Pops are treated and what manner of control you can enforce over their lives. Free Speech determines the degree of control you can enforce over your Interest Groups but restrictive rights throttle the spread of innovation. The Labor Rights Laws include outlawing serfdom, but extends all the way to establishing a Workplace Safety Institution to reduce the number of people literally crushed in the jaws of industry. Children’s Rights and the Rights of Women have a number of effects such as shifting the Workforce/Dependent demographics, affecting Dependent income, and extending the franchise. Welfare ensures the poor and disabled in your society are taken care of. Migration Laws can be used to influence Pop migration. Slavery Laws determine the legal status of owning people in your country. More details on that subject in a future dev diary.

Not a lot of concessions have been made here, but at least children may congregate freely after the factory whistle signals the end of their grueling workday. 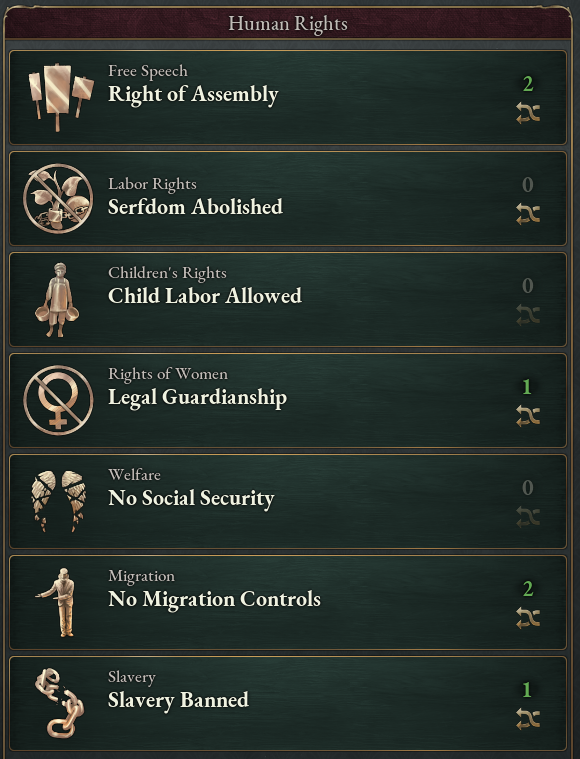 Laws are almost always completely independent from one another. You can create a Constitutional Monarchy with hereditary succession but Universal Suffrage, or an Autocratic Presidential Republic with a strongman leader at the top of the food chain. You can have a Secret Police and still permit fully Protected Speech.

Our aim is to set all countries up with the best fitting Laws compared to what they actually had in 1836. This will vary wildly between countries, and will greatly influence what sorts of conditions and strategies are available to you at the start of the game. For example, the USA starts with Total Separation of Church and State, ensuring no Pops suffer legal discrimination on account of their religion, while Sardinia-Piedmont doesn’t take kindly to non-Catholic Pops. This will affect Pops who live in the country currently, but will also limit which Pops might migrate there – few Pops would make it their preference to move to a country where they’re mistreated by law.

As a result of these starting Laws Sardinia-Piedmont might have to look towards colonization or conquest if they start to run out of their native workforce, while North America is likely to get regular migration waves to help expand the frontier. By connecting these effects to starting Laws, many historically appropriate and recognizable aspects and behaviors of Victorian-era nations – such as their attractiveness to immigrants – are connected to a tangible property (e.g. poor or oppressed Pops emigrating to the USA both because of its demand for workforce and also its liberal Laws) rather than being arbitrarily encoded into the very fabric of the nation itself, the approach previous Victoria games took to encourage history in the a familiar direction.

However, these starting Laws are far from set in stone! You might want to reform your Laws to better suit the direction your society is going – for example, you might want to transition your Bureaucracy from a system of Appointees to Elected Bureaucrats in order to more effectively provide services from Government Institutions to all your incorporated territories (or maybe just because you want to disempower the otherwise powerful Intelligentsia.) Or your country’s Agrarian economy has plateaued on account of increased reliance on imports of manufactured goods, and you want to change course to the exciting opportunities provided by a Free Trade policy.

A common effect of Laws is to modify some parameter about your country, like give you more Authority or reduce certain Pops’ Mortality. But Laws can also permit or disallow the use of certain actions, such as Public Schools which permit the Compulsory Primary School Law; permit the Decree to Promote Social Mobility in a certain state; and even alter the effects of other parts of your society, like boost the efficacy of your Education System Institution. Without some degree of separation between Church and State, this form of secular school system is not possible. 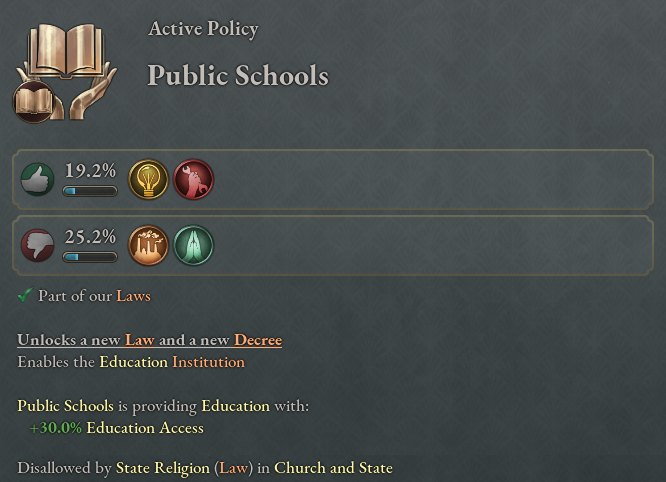 Another reason to change Laws is because your people demand it. As we touched on in the previous dev diary, Interest Groups have Ideologies that lead them to favor some Laws over others – for example, the Industrialists have the Individualist Ideology that cause them to favor privately operated Education and Healthcare systems over publicly funded ones, to ensure best access is given to those of merit and morals (or in other words, Wealth). Reforming your current Laws to work more in accordance with your powerful Interest Groups’ Ideologies is a quick way to win their Approval, permitting you more leeway to go against their wishes in the future or as a quick pick-me-up in case their Standard of Living has recently taken a hit.

The inverse is also true. Introduce a bill to abolish the Monarchy in Great Britain and see how the Landed Gentry feel about that.

Even Trade Unionists have a hard time saying no to zero income taxes, but even that won’t make up for restricting the vote! 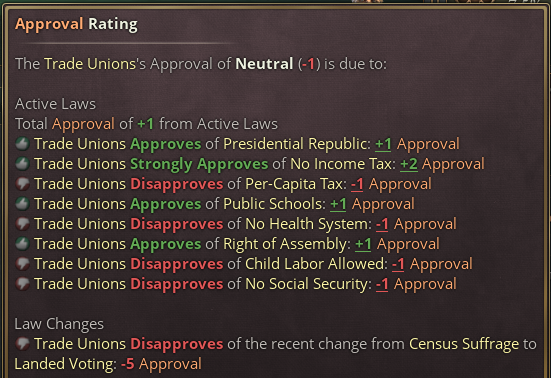 Enacting a Law is far from an instantaneous, one-click affair. First off, any reform must be supported by at least one Interest Group in your government who can champion the change. Once the reform has begun it can be a smooth process that’s over in a matter of months, or it can take years of gruelling debate in parliament or horsetrading between Interest Groups in order to pass. The amount of time it takes depends both on your government’s Legitimacy in the eyes of the people, and also on the Clout of the Interest Groups in your government that supports and opposes the new Law relative to the one it’s replacing. While broader coalitions of Interest Groups in government give you more options of Laws to enact, it also complicates getting them passed.

Changing your laws isn’t an entirely straightforward process in Victoria 3! In this case it’s just a matter of time before the Law is enacted, but if dissenting Interest Groups had also been part of this government there would be plenty of room for Debate and Stalling tactics that could cause this reform to take more effort than it’s worth.

Let me close out here by tying all this back to the Pops. As we have touched on in past dev diaries, Pops have a Profession, collect an income, and consume goods depending on the economic preconditions you have created in your country. These material concerns in combination with a few others, such as Literacy, determine which Interest Groups they support. Other aspects, such as your country’s Laws, influence how much Political Strength the Pops provide to those Interest Groups. The Interest Groups have an Approval score and favor certain Laws over others. As a result, different groups of Pops approve more or less of the society you have built depending on their economic well-being, and their demands for change is more or less intimidating depending on how many and strong they are. You may choose to placate an angry group, or further benefit an already content group for extra benefits. But in doing so, some other group will become displeased. Have you built your society resilient enough to navigate these ebbs and flows? And most importantly, which of the many, many routes will you take to move forward?

That is all for me this week! In this dev diary I mentioned Institutions a number of times, and next Thursday I will be back with more details on this powerful society-shaping tool. Until then!