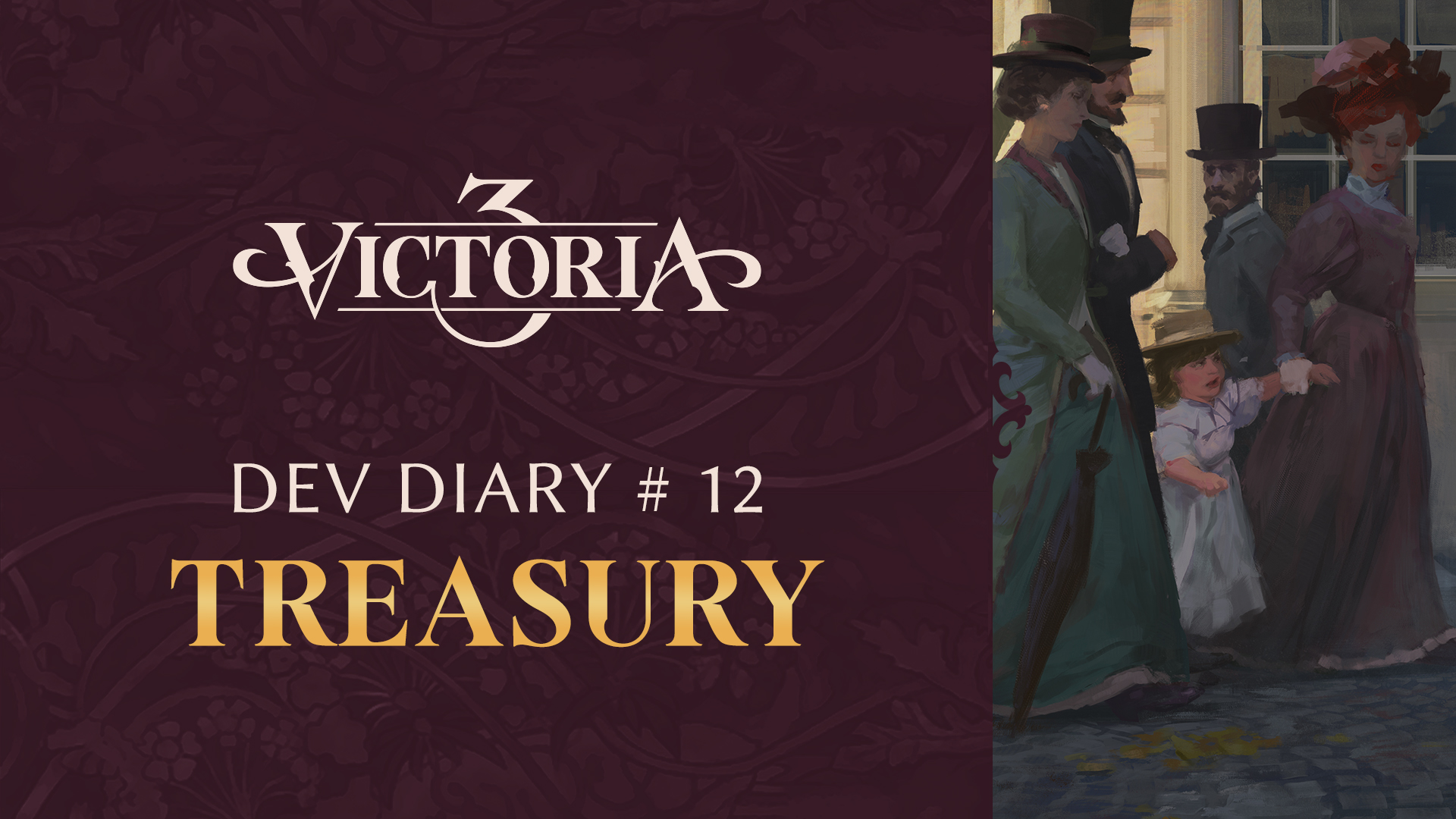 Hello and welcome to another development diary for Victoria 3! Today we’ll be covering a topic that tends to be very much in the mind of governments of all eras: Money! Specifically, we’re going to be talking about income, expenses and debt, and how they function on the national level.

As was mentioned all the way back in Dev Diary #2, Money is one of the principal resources you have to manage in Victoria 3. This in itself is of course nothing new (money of some form playing a role in almost every Grand Strategy game we’ve ever released), but the way money works is a little bit different than what you might be used to.

In most games, money tends to be a resource you accumulate for a specific goal, until you have enough of it to achieve that specific goal. For example, you might want to build a building that costs 100 money, and your monthly income is 10 money. That means in order to build said building, you have to wait for 10 months to accumulate the 100 money needed for the lump sum cost to order the construction of said building.

Now, you might be asking, why am I explaining such a simple and obvious mechanic that undoubtedly every single reader of this dev diary is completely familiar with? The reason for this is because in Victoria 3, there is no such thing as a lump sum cost – instead, it’s all about your weekly balance. At the end of every in-game week, your country’s income and expenses are tallied up and the result is then applied to your Gold Reserve or National Debt. This also means that all forms of expenses, such as construction, also work on a weekly basis – you do not need any cash ‘on hand’ to start construction of a dozen buildings at once, but if you don’t have the revenue to support it you may find yourself quickly going into debt. 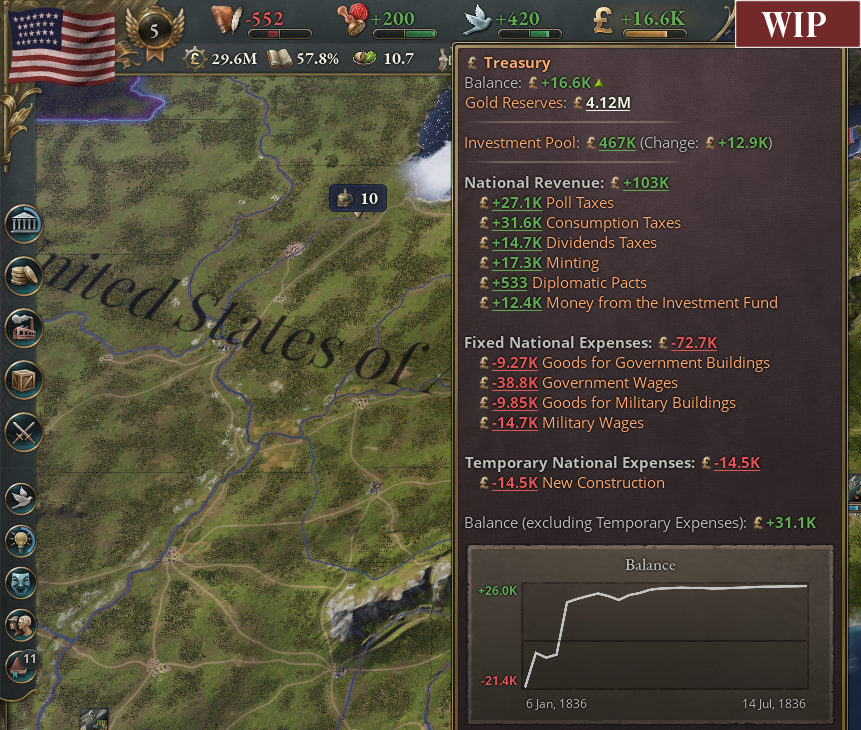 The Gold Reserve is your country’s national stockpile of cash. If you are free of debt, any money that is left over in the weekly budget after expenses are subtracted is used to increase the Gold Reserve. Conversely, if your expenses exceed your income, this money is taken out of the Gold Reserve to balance the books.

Though it’s certainly never bad in itself to have a sizable Gold Reserve, it isn’t necessarily the best idea to continually run a large budget surplus – each country has a Gold Reserve Limit, which is a ‘soft-cap’ over which each surplus pound has diminishing returns on the Gold Reserve – if you have an enormous stockpile of gold, a surplus of £10k may only increase your stockpile by as little as £2k, meaning that you’ve simply wasted the rest of your money. Hence, a country that finds its gold reserves filling up may want to consider finding a way to reinvest some of that money to avoid such wastage.

The Spanish Gold Reserve has grown to the point where further stockpiling is becoming very inefficient, and they should really try to find better uses for some of that money 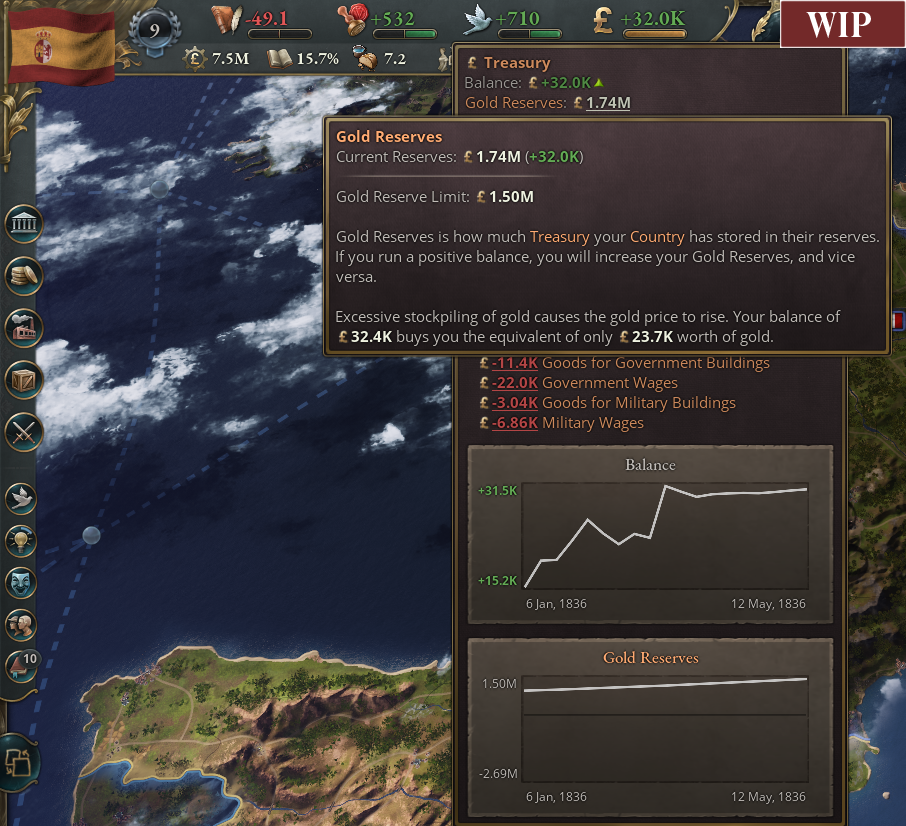 So what if you’re running a deficit and your Gold Reserve has all been tapped? Well, this is when debt comes into play. Beyond that point, each pound spent in excess of your income will result in automatically taking on debt. While this may sound like something that you should avoid at all costs, that isn’t necessarily true.

While you do have to pay interest on your loans, interest rates in Victoria 3 are relatively low, and so long as you avoid hitting your Debt Ceiling, growing your economy through deficit spending can actually be a very valid strategy. This is because the increase in revenues from minting and taxation may very well end up exceeding the interest payments, not to mention the benefits constructing new industries can have for your population.

The Debt Ceiling, unlike the Gold Reserve, is not a soft cap – once you hit it, your country will be in default, which is a terrible state to be in and can only be recovered from if you manage to slash your expenses enough to put your weekly expenses back in the black (or if another country steps in and takes on your debt, which can have its own undesirable outcomes for you… but more on that later). It’s also possible to simply declare bankruptcy, but because the money you are borrowing against is actually the cash reserves of your country’s buildings (which is actually what determines the size of your Debt Ceiling), this will have immensely negative consequences for your domestic industry.

Even though Britain has taken on several million pounds of debt, this isn’t too much of an issue – their advanced economy allows them a high debt ceiling, and the interest payments is only a small fraction of their spending 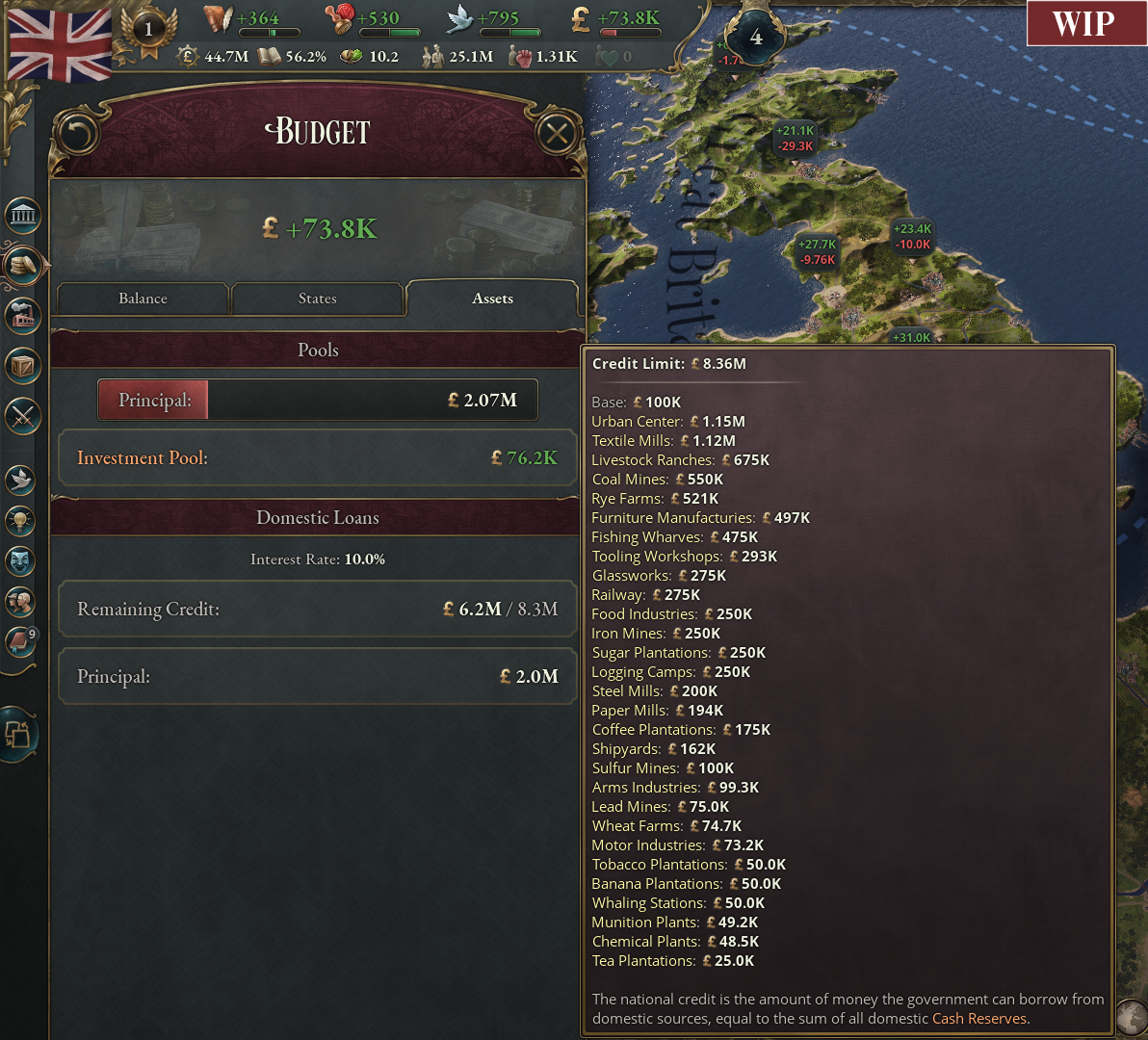 To wrap up this Dev Diary, I’m going to briefly touch on the main forms of income and expenditures, though this is by no means an exhaustive list! Some forms of income and expenses (taxes and salaries, specifically) also have a ‘level’ setting, where you can for example squeeze more taxes out of your population at the cost of reduced legitimacy and increased radicalization. 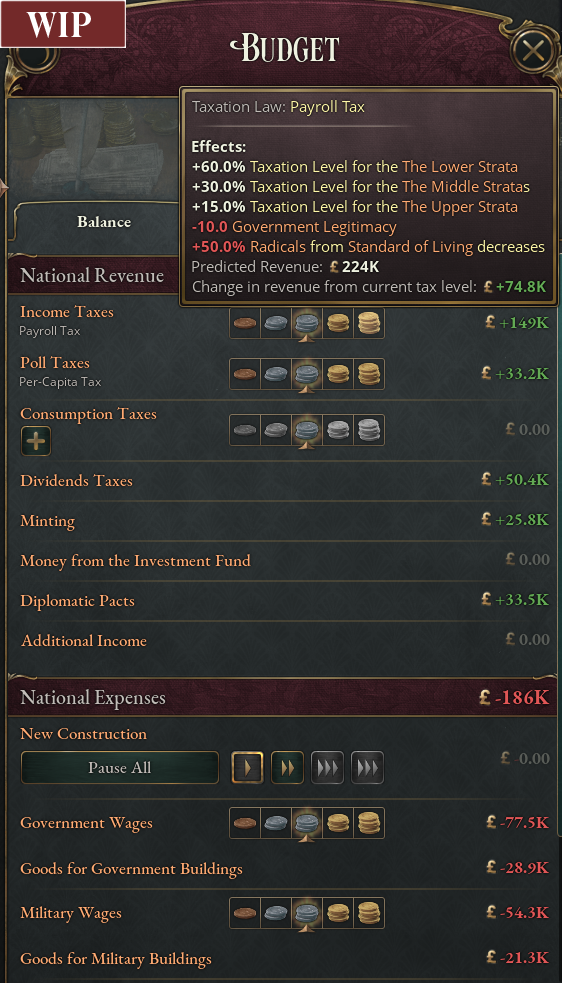 Well then, that’s all for today. Next week we’re going to be talking about a topic that touches on both economics and politics – Standard of Living. See you then!