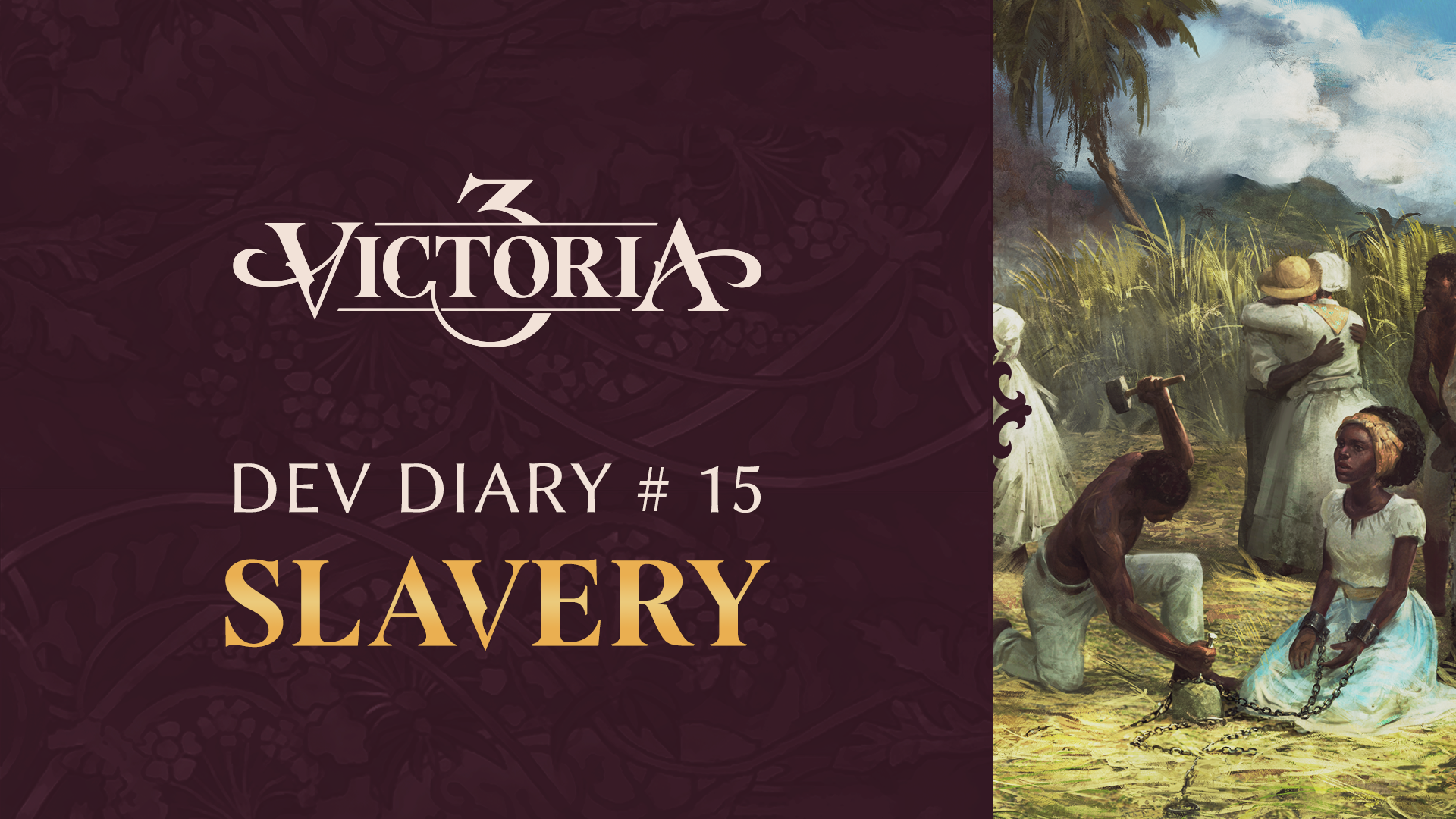 It’s Thursday again, which means it’s time for another Victoria 3 development diary. Today’s subject of slavery is a rather heavy one, being both one of the most significant political issues of the Victorian era as well a story of untold suffering on a human level. For this reason, before I start getting into the mechanics of slavery I want to briefly explain our philosophy behind its representation in Victoria 3.

Slavery is, obviously, a horrific crime against humanity and precisely for this reason, many games that have a slavery-related setting or mechanics will either leave it out of the game or abstract it into something that’s less ‘on the nose’ (for example by simply applying some form of economic bonus at the expense of decreased stability). For Victoria 3, we don’t think these options work for us for two main reasons.

The first reason is that as I mentioned before, it was an important political issue of the day and was a major catalyst for several significant conflicts, most notably the American Civil War which would be bizarrely contextless if slavery did not play a significant role in the game. The other, and most important reason, is that through our Pop system we are trying to represent every individual human on the planet from 1836, so what statement would we be making if we simply wrote all enslaved individuals out of history, or reduced them into an abstract set of modifiers?

Instead, our aim is to try and represent the institution, systems and causes of slavery, as well as the people who lived under and fought against it, as close to history as we can get it. We simply believe this to be the most respectful way for us to handle this topic, as well as the way that’s most true to the game Victoria 3 aspires to be. With that said, let’s get into the actual mechanics of how slavery and slave pops function in Victoria 3.

As was mentioned in the Employment and Qualifications dev diary, slaves are what Victoria 2 would have called a ‘Pop Type‘ and Victoria 3 calls a ‘Profession‘, but function in a significantly different way from other Pops. For one, slaves do not get hired with the enticement of a wage and do not have the freedom to choose the place they work. Slaves also aren’t just able to stop being slaves by switching their Profession to one that does offer a wage and freedom of movement.

These Slaves are given the bare minimum of goods not to starve, resulting in a very slight population increase over time but a generally miserable existence for the people that make up the Pop 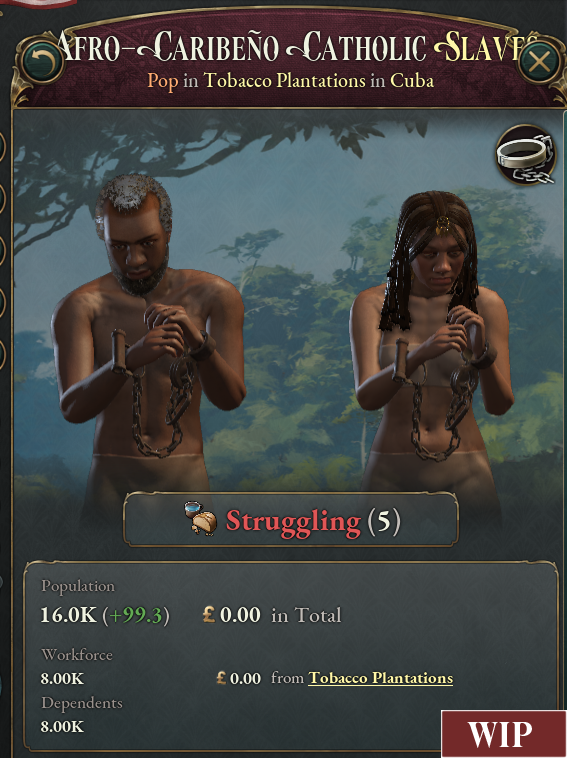 Buildings that ‘employ’ slaves also do so in a way that differs from the way they employ other Professions. The gist of how this works is that in a state that has slaves, certain buildings (for example plantations) that employ laborers or peasants can fill each available position for those Professions with either a laborer/peasant or a slave. As an example, a Cotton Plantation in a slave state that has the capacity to employ 4000 laborers could fill that capacity with 2240 slaves and 1760 laborers, 4000 laborers and 0 slaves, or any other combination of the two less or equal to 4000. Generally buildings will prefer acquiring slaves over hiring free laborers whenever possible for the economic benefits it brings.

So what are those economic benefits? Well, first, it should be understood that said economic benefits are mostly for the owners of the building, meaning a bunch of wealthy aristocrats in the case of Cotton Plantations. Instead of paying wages, each building decides a standard of living based on factors such as laws and profitability and purchases the ‘necessary’ goods for that target standard of living. This target SoL may not always be at the level of outright starvation but is never going to be anything but a very basic existence.

The cost to purchase said goods is simply added as a building expense and is virtually always going to be cheaper than employing paid labor, which translates into lower costs, higher profits and increased dividends for the building owners. Slaves also do not pay taxes in any form, so if the government wants to convert those profits into revenue, they have to do so through the various forms of wealth-based taxes that are always going to be deeply unpopular with the powerful elite.

These Tobacco plantations on Cuba have fully replaced the usual Laborer workforce with Slaves instead, leading to greater wealth for the Aristocrats 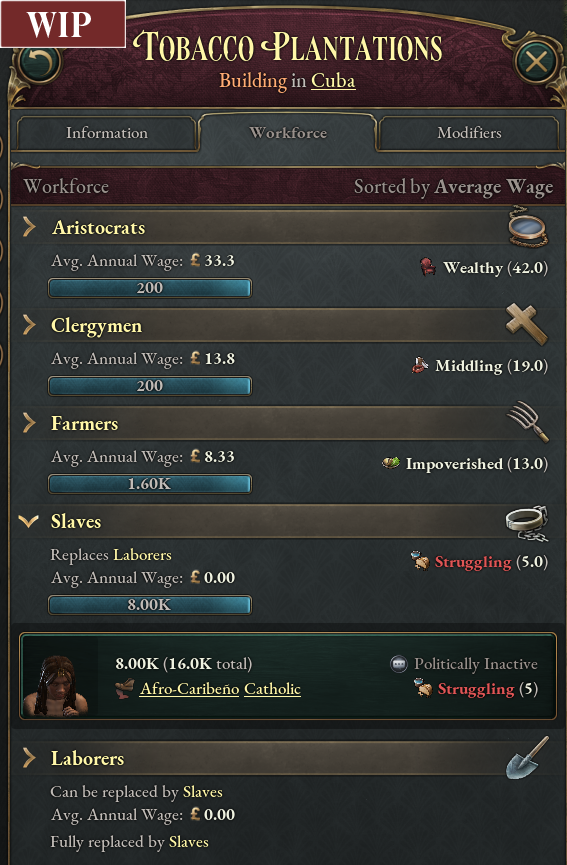 However, there is one economic advantage to slavery that goes a little beyond just enriching aristocrats: Slave pops have a higher ratio of workforce to dependents than other pops, meaning that a population of 100k slaves can supply the labor needs of a greater number of buildings than a population of 100k laborers. The key thing here is of course that not all buildings can utilize slaves, so this isn’t going to be doing any good for an industrialized manufacturing economy, but a country that aims to keep its economy agriculture/plantation-focused and suffers from a labor shortage may find the brutal economics of slavery to work in its favor, if they’re willing to stomach the human cost and stamp down on any resistance.

So what of that resistance? Well, given that slavery is founded entirely on human misery, slaves are naturally not going to be content with their lot in life, and will attempt to resist by whatever means are available to them. Mechanically this translates into a steady stream of radicalized slaves and the threat of turmoil and slave uprisings. This threat to a slave society can usually be averted with sufficiently repressive measures, but fear and violence is not a good foundation for a completely stable country.

Of course, resistance to slavery doesn’t just come from the slaves themselves, but also from Abolitionists, both internally in your country (in the form of characters and Interest Groups with the Abolitionist ideology) and externally in the form of Abolitionist-led countries that may  hinder or put pressure on slave regimes that aren’t strong enough to resist them. The most notable historical example here being Britain and its naval efforts to stamp out the trans-atlantic slave trade in the 19th century.

With the explanation out of the way, let’s talk about slavery laws. These are what govern who (if anyone) is enslaved or emancipated and where (if anywhere) slavery can exist in your country. They are as follows:

Slavery Abolished: The law that most countries with advanced economies start with. Under this law, slavery is completely illegal and on its passage any slave pops in the country are immediately emancipated and converted into laborers. If a country with this law comes into possession of land where slaves are living, said slaves are also immediately emancipated as above.

Debt Slavery: This law is meant to represent traditional systems of generally debt-based slavery, present in a number of economically less advanced and/or decentralized countries. Under Debt Slavery, Pops of low Wealth levels will gradually create a trickle of new slaves (with poorer pops converting into slaves at a higher rate), as individuals sell themselves or others into slavery for economic reasons such as debt repayment. However, under this system, children born to slaves are born free, so slave populations will not grow by themselves.

Slave Trade: This law is meant to represent the kind of widespread chattel slavery practised in places such as Brazil and Cuba. Under Slave Trade, the children of slaves are born as slaves and new slaves can also be imported from abroad. We’ll not go over exactly how slave import works today, but the gist of it is that slaves can be imported from decentralized countries that practice slavery if the importer has an established Interest in the region (more on Interests at a later point).

Legacy Slavery: This law is meant to represent countries that have made slave trade illegal but not abolished it altogether, most notably the United States of America. Under Legacy Slavery, the country is divided into Free States and Slave States. In Free States, slavery is illegal and everything functions exactly as if the country had the Slavery Abolished law, while Slave States function as though they had the Slave Trade law with the notable exception that new slaves cannot be imported from abroad. Under this law, slaves also tend to have a slightly higher standard of living for the simple reason that a starving slave population isn’t demographically sustainable. This law also plays an important role in how the American Civil War functions in the game, but that’s a topic for a later dev diary.

The United States starts the game with the Legacy Slavery law. Surely, nothing will go wrong if they start trying to abolish it right away? 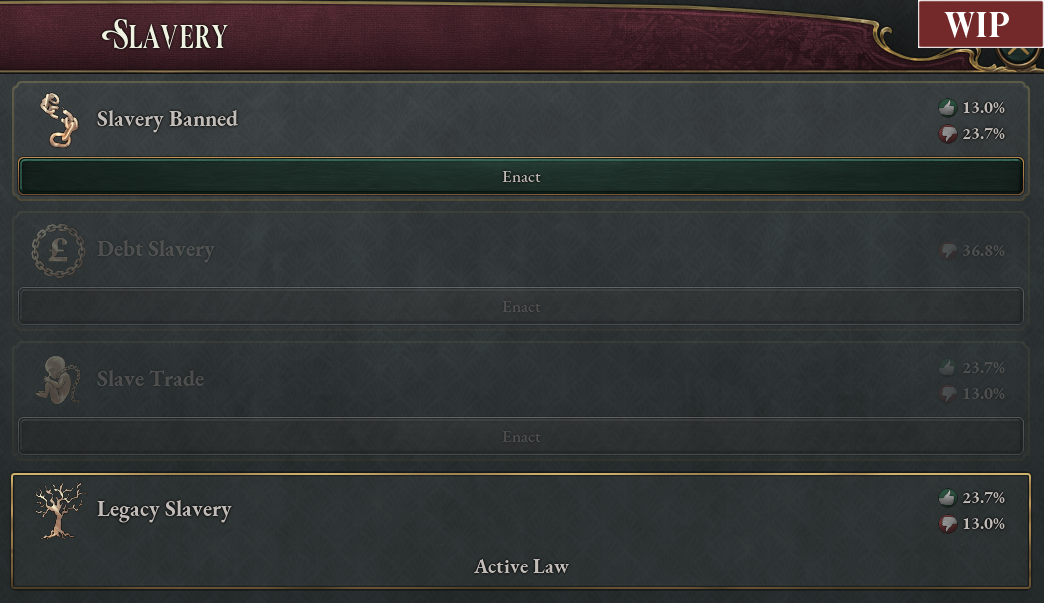 Since slavery laws function just like any other laws, it is possible for them to change in different ways: a country with Slave Trade may follow the US example and change to Legacy Slavery as a compromise alternative to abolishing it altogether, and a country that has fully abolished slavery can even try to bring it back. Given that no country in history actually re-legalized chattel slavery after abolishing it, this is very difficult to do (once abolished there will generally be a strong anti-slavery bastion in a country that aren’t going to look kindly on such proposals). Of course, trying to abolish slavery isn’t likely to happen without resistance either – those wealthy aristocrats who benefit from it have a vested interest in defending it, after all.

Lyman Beecher, leader of the Devout Interest Group in the United States, is an ardent opponent of slavery 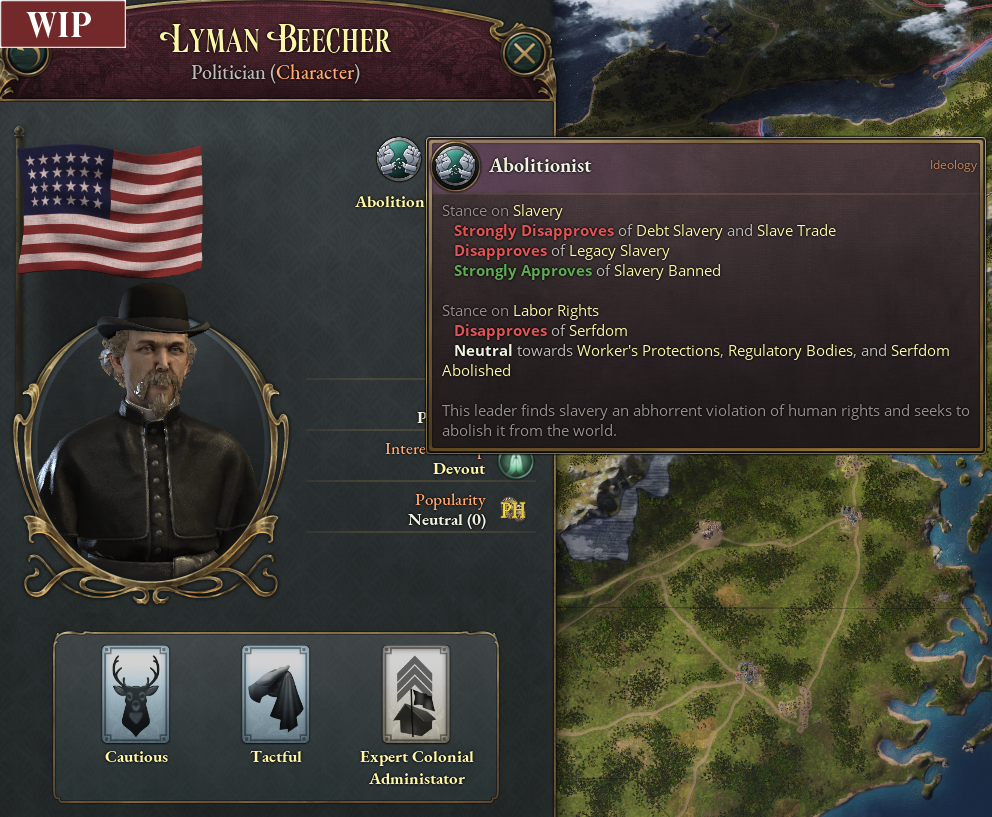 On that note, we’ve reached the end of this dev diary, though we’ll return a bit to this topic in the future when we talk about diplomacy (which isn’t that far away now!). Next week we’re going to go over the system of States and their related mechanics such as State Regions, Split States and Turmoil.