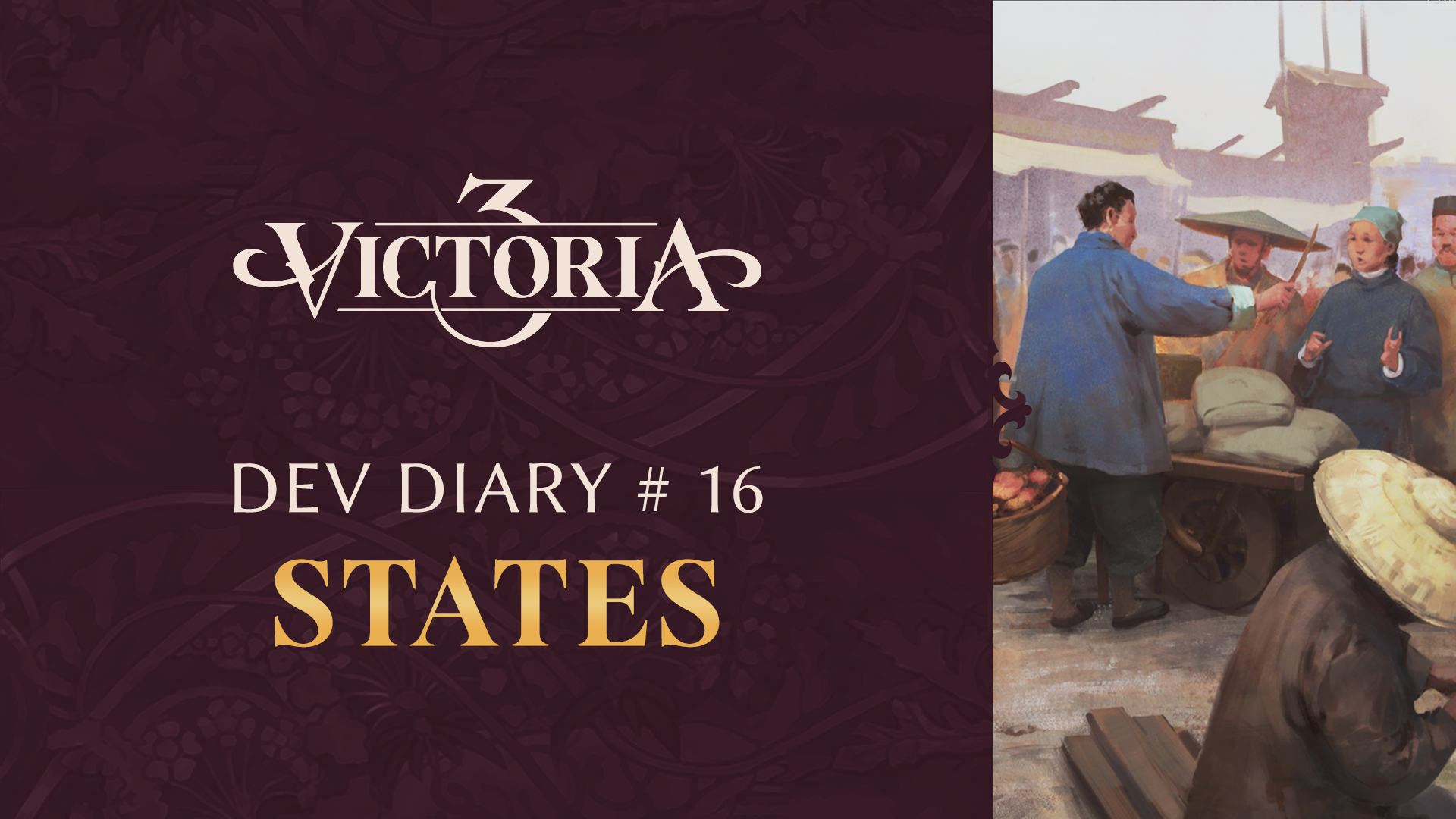 It’s Thursday again and that means it’s time for another Victoria 3 dev diary! Today’s dev diary is going to be a little bit different in that it will mostly be about collecting and further explaining the various mechanics that tie into States. There might not be a whole lot of new information here for people who have been closely following the development, but we feel it’s important to put all this information in the same place and clarify a few points.

So then, onto the topic of States. States, as we have previously touched on, are the main political-geographical unit of Victoria 3, where pops live and buildings are built. Before we proceed it will be useful to understand the difference between States and State Regions. A State is always controlled by a single country and its borders are dynamic (can change over the course of the game, including being created and destroyed), while State Regions can contain 1 or several States and have static borders (unchanging throughout the game). If a single country owns all provinces within a State Region, there is no practical difference between these concepts. But if more than one country owns provinces within a single State Region, they will each control individual States within it.

Political control of the State Region of Rajputana is split between numerous Indian Princes, none of which control enough of the region for their part to be considered Rajputana proper. 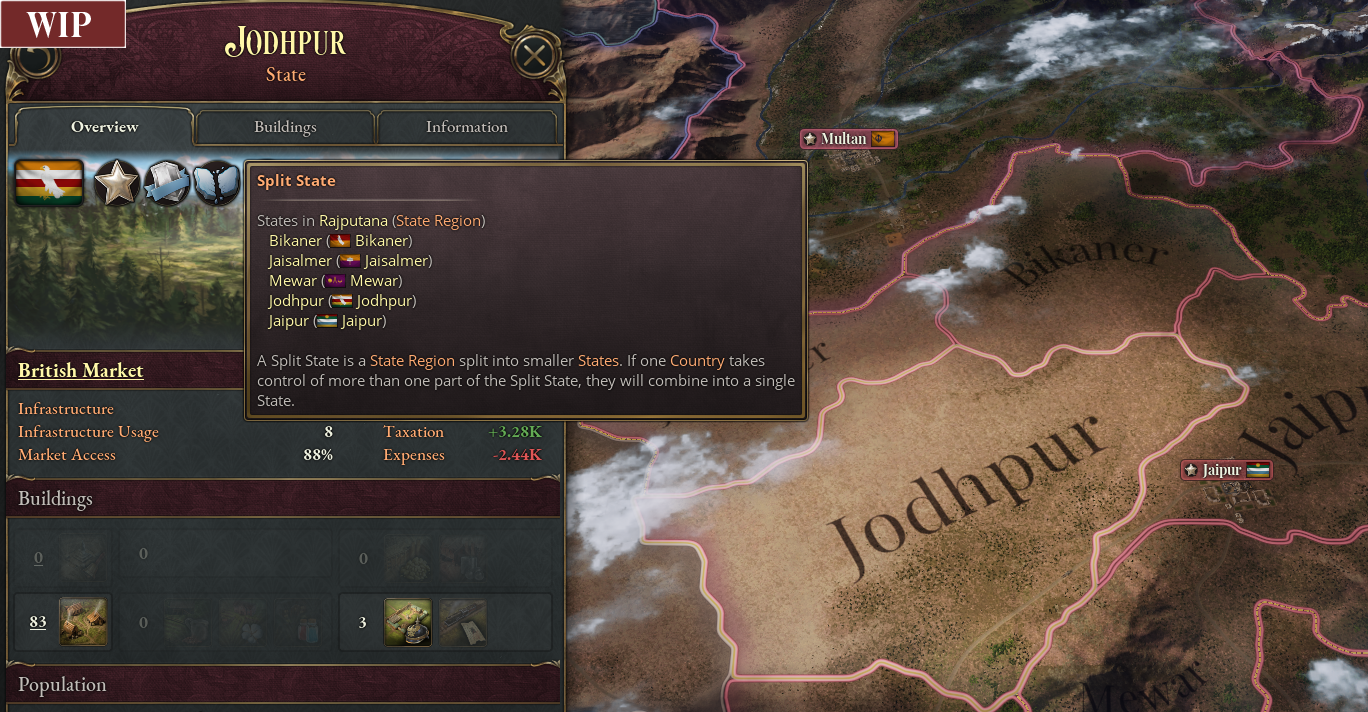 In addition to political ownership, there are a number of conditions that can apply to a State that affects the local population and economy. First of all, there is something called Incorporation Status, representing a State’s political status within the country that owns it. The different Incorporation States are as follows:

It is possible to Incorporate any Unincorporated/Colonial State as long as you have the Bureaucracy that would be needed to properly administer it, but this can be a rocky process – while the increased costs kick in immediately, the benefits (taxes, institutions and so on) are only gradually phased in over time. The time it takes depends on how easy it is for your country to integrate the local population – it would be a lot more difficult for Britain to incorporate an Indian state than it would be for them to incorporate the Falklands, for example.

Other conditions that can apply to a State include (not an exhaustive list):

Pennsylvania is an Incorporated State, contributing both taxes and a star on the flag to the United States of America 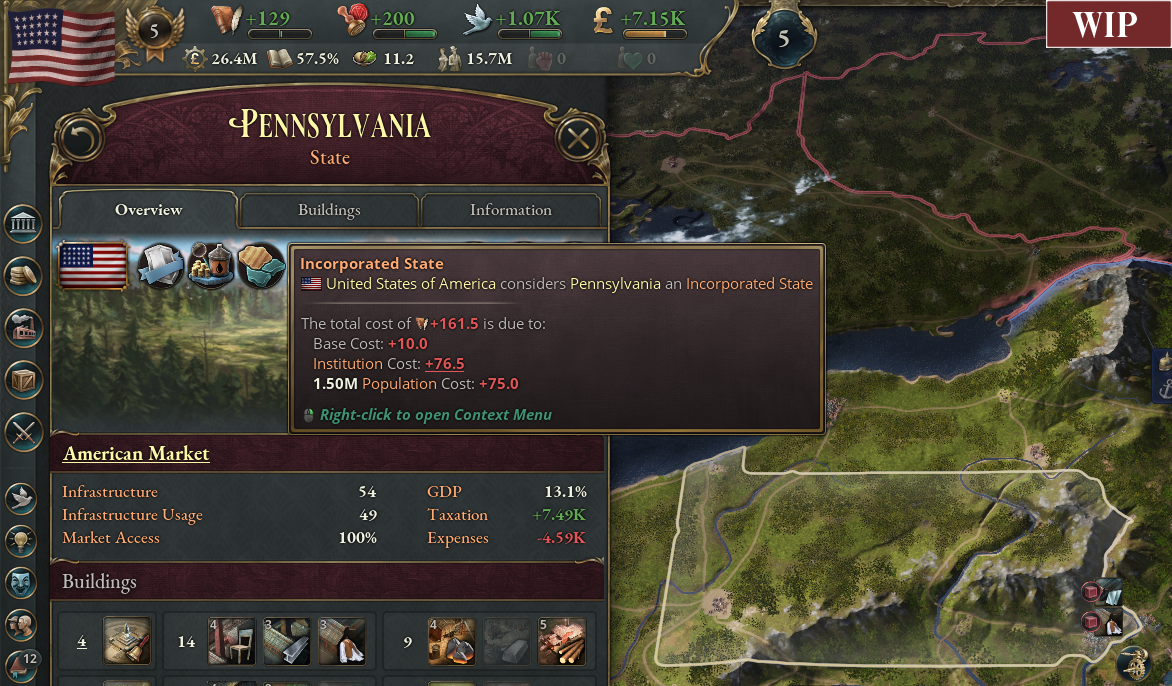 States can also inherit certain conditions from their State Regions, including:

Guano was a central pillar of the Peruvian economy in the mid-19th century, and a war was even fought over control of the Chincha Islands between Spain and Peru (the icon for this particular State Trait is a placeholder) 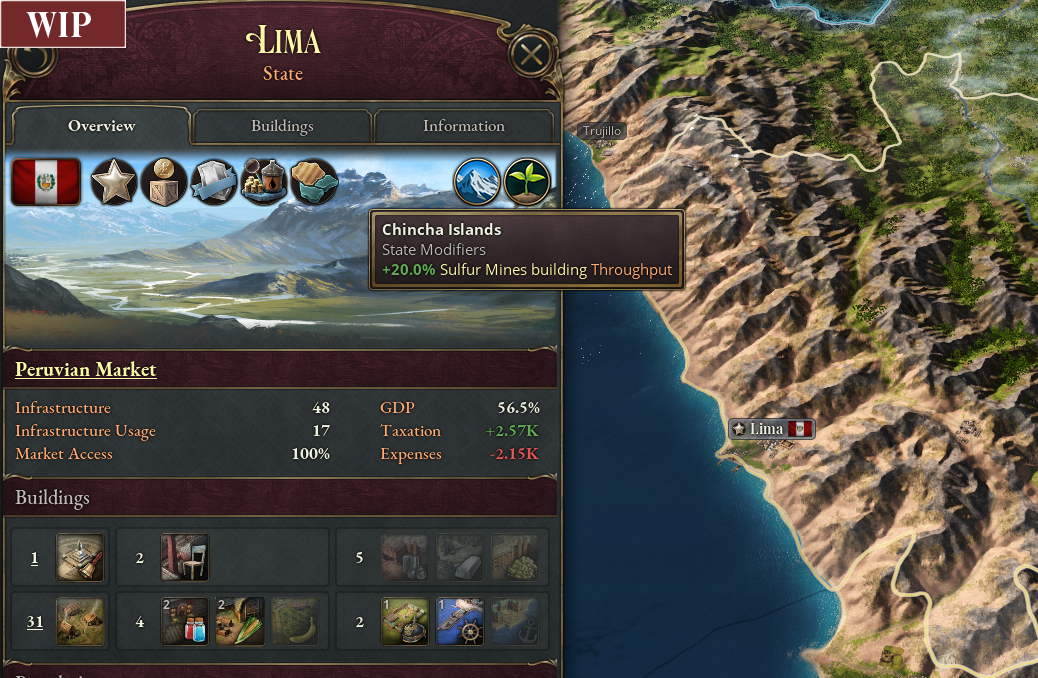 As mentioned all the way back in the dev diary about Buildings, States are limited in which Resource Industry Building Types they can support and how large these can get. For example, the degree of Iron deposits in a state limits how many levels of Iron Mine you can build there. These resource limits are actually a property of State Regions, which is dynamically allocated to the States in the region based on how large of a share the State holds.

It’s worth noting that this proportion isn’t just based on the raw number of provinces owned. As an example, potential for Fisheries are distributed according to the amount of coastline a State has in the State Region, while Arable Land land can be heavily weighted by the amount of Prime Land is in each State. While not applicable everywhere, Prime Land is something we use in states where there is a clear division between fertile and non-fertile land – control of the Nile should matter a lot more to a State in Upper Egypt’s Arable Land than control of the surrounding desert, for example.

It’s also possible for a State Region to contain Discoverable Resources. These are resources such as Oil, Gold or Rubber that are either not known about or not considered exploitable at the start of the game, but may be discovered and exploited at a later point. Certain technologies will affect both which resources can be discovered and the actual chance of said resource being discovered. All of this functions in a weighted random fashion, so while the chance of there being a Klondike gold rush at some point during the game is high, it probably won’t happen exactly at the same date it did historically.

There may or may not be gold in them hills! 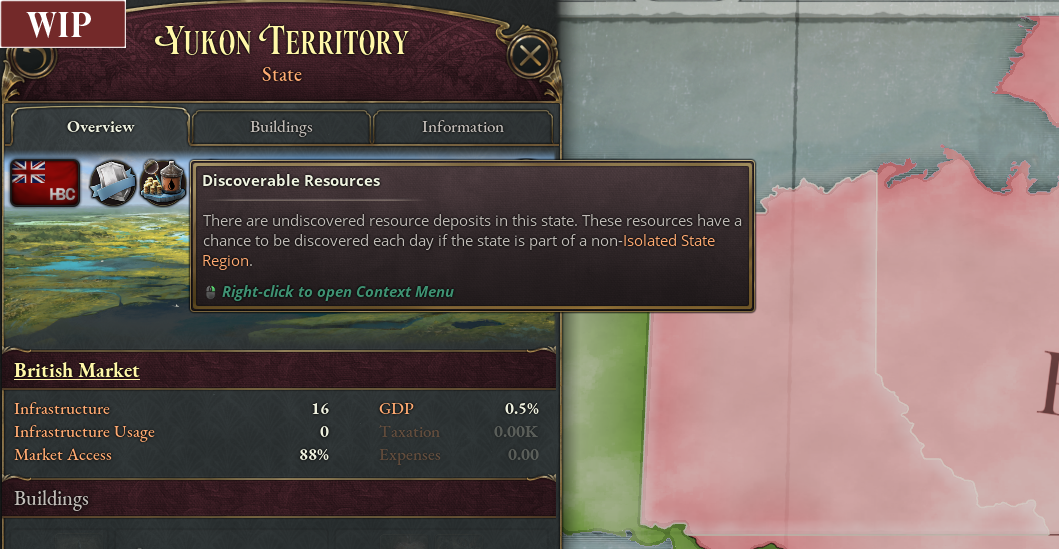 Alright then, that’s all for today! Next week we’ll be continuing on the topic of Politics as I explain how Migration works.