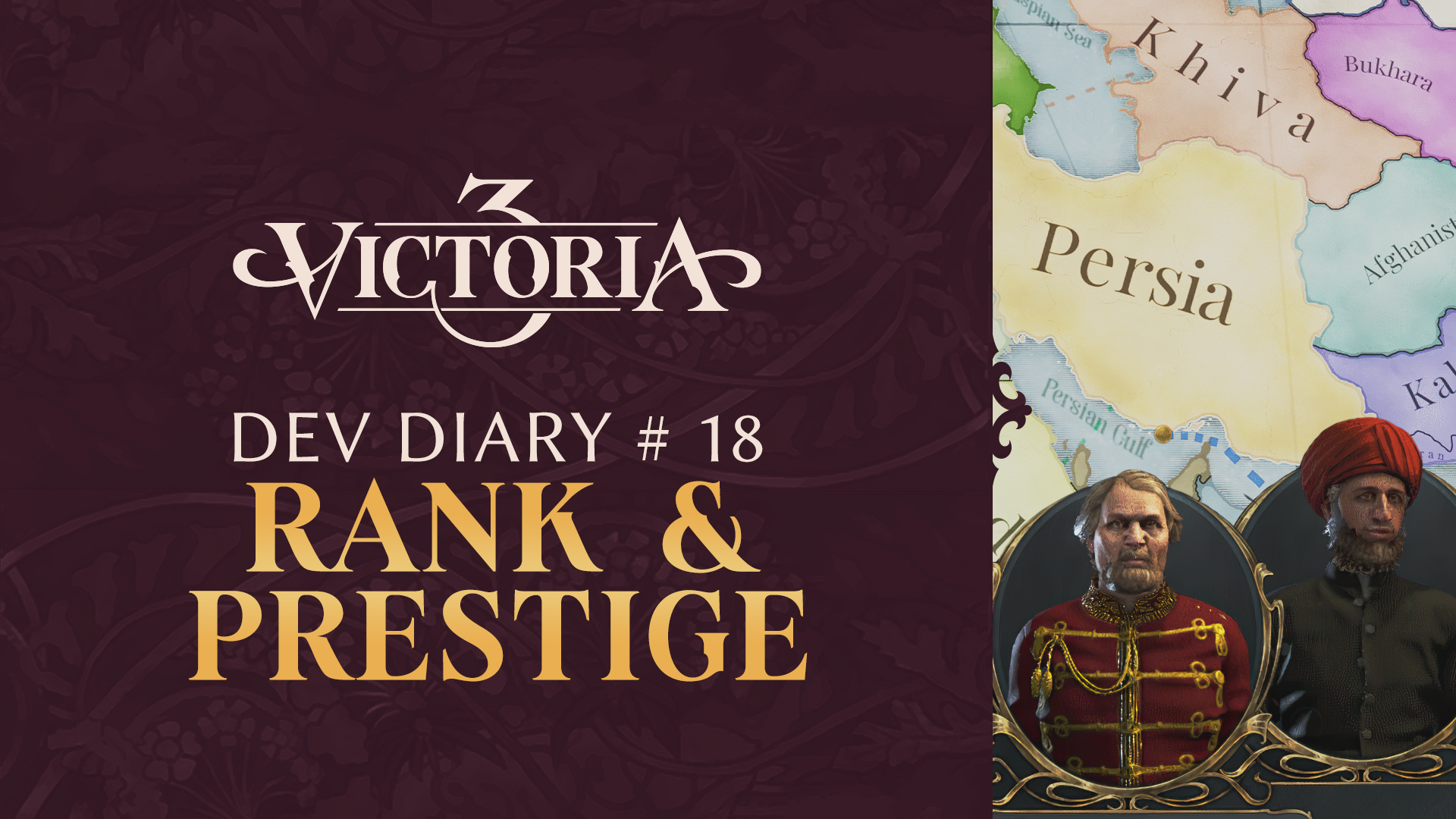 Happy Thursday and welcome to a brand new dev diary for Victoria 3! Today we’re finally switching away from talking about economy and politics and starting on a string of Diplomacy-oriented dev diaries, of which the first is this one, where we’ll be covering Rank and Prestige, two interconnected mechanics that play a very central role in how diplomatic matters play out in the game.

Rank is a mechanic that also existed in both previous Victoria games, and is a measure of how glorious and influential a country is in the eyes of the rest of the world. What Rank a country has – be it a mighty Great Power or a largely irrelevant Unrecognized Power – is determined by two factors: Prestige (which we’ll be explaining below) and Recognition.

When talking about Recognition, it’s important to note that we are not talking about Recognition in the more commonly used term when applying to nations, that is, whether other countries recognize the nation’s independence and existence in the first place. Rather, it is a measure of whether the reigning (probably mostly European) Great Powers, as a whole, see the country as a potential equal, i.e. whether the country could potentially be included as a decision-maker in said system if they grew strong enough.

We’re not going to go too deep into this specific topic today (as we’ll return to it in a later dev diary), but the gist of it is that countries start the game either Unrecognized or Recognized, and Unrecognized countries have to gain or force recognition in order to properly climb the Rank ladder. The Unrecognized/Recognized system replaces the Civilized/Uncivilized system of Victoria 1 and 2, and a difference from those games is that being an Unrecognized country is purely a Diplomatic status with Diplomatic penalties – a country does not become inherently worse at constructing factories or fighting wars by virtue of being scorned by Metternich and his friends, though many countries with Unrecognized status do also start out on the lower end of the technological scale.

Though it has among the highest Prestige ratings in the world, Great Qing’s status as an Unrecognized Country severely limits its potential rank among the nations of the world

All in all, there are six different ranks that a country can occupy in Victoria 3, as well as a special seventh rank that only applies to Decentralized (non-playable) nations and so isn’t of any real interest to talk about today (please note that the names of some of these may be subject to change):

So then, what benefits do Rank confer? Generally, the higher a country’s Rank, the more Influence capacity it generates (allowing for a greater freedom in conducting diplomacy and signing diplomatic pacts), the more Declared Interests it can support (more on that next week) and the more Maneuvers it has in Diplomatic Plays (more on that in a few weeks). Rank also plays a key role in many other systems such as Subjects, Infamy, Diplomatic Actions and more, some of which we’ll get into in the coming weeks (I know I keep saying that, but bear with me, we’ve only just started on Diplomacy!).

France starts the game as the second Great Power, just behind Britain in Prestige 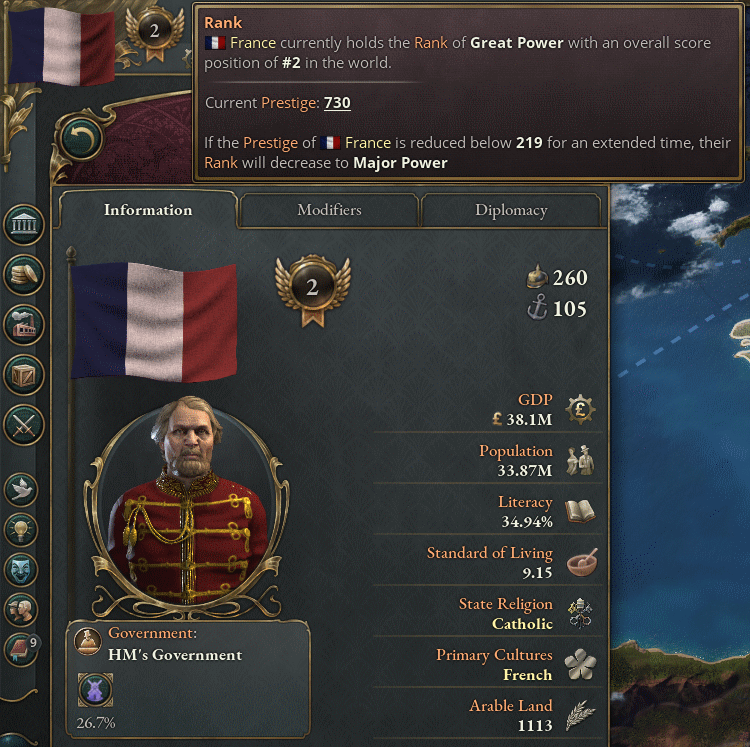 Prestige, as was mentioned above, plays a central role in all of this. Simply put, Prestige is what determines who gets to occupy what rank in the global pecking order. Unlike in Victoria 1 and Victoria 2, where Prestige was just one of three factors determining what Rank a country had, in Victoria 3 Prestige is the accumulation of all factors that makes a country more or less glorious. In order to become a certain rank, a country must meet the Prestige threshold for that rank, which is based on both how it compares to the global average and percentile-wise compared to the most prestigious country.

To explain what I mean by that, here is a look at the current requirements to be a Great Power:

This means two things: The number of Great Powers, Major Powers and so on is not fixed to a specific number (as it was in Victoria 1 and 2, where you would always have 8 of each), and that the requirements to maintain and increase your Rank will change over the course of the game. A country might start as a Great Power due to their starting prestige, but then begin quickly falling behind due to economic and military stagnation, eventually being reduced to a Major Power even though their actual Prestige number never went down. 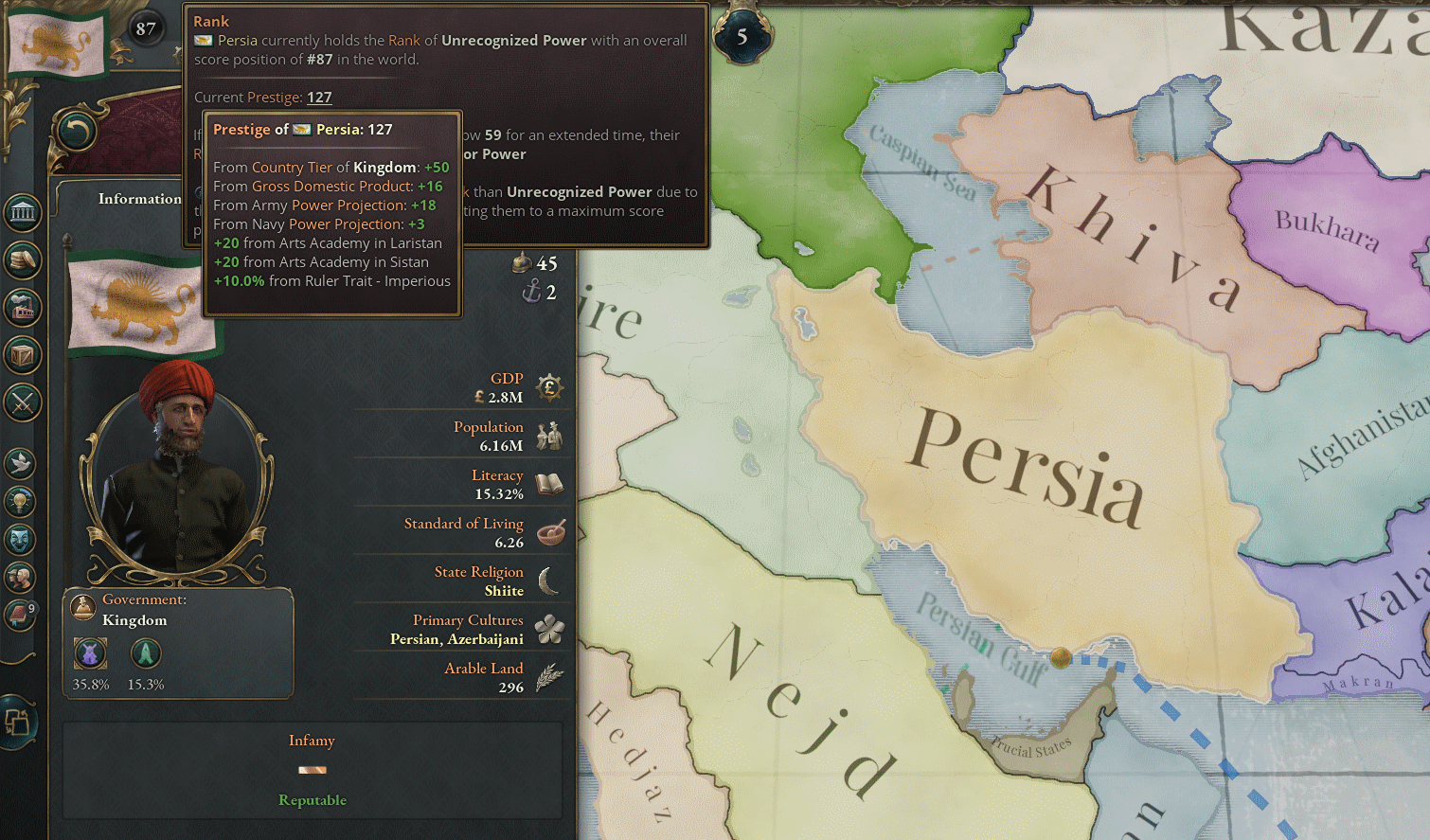 So, what is it that can give a country Prestige? The answer is… a whole lot of things! Here’s a look at some of these things, though it’s by no means an exhaustive list:

That’s it for today, but we’re of course only getting started on talking about this part of the game, so next week I will return with another dev diary covering several different Diplomacy-related mechanics, namely Relations, Infamy and Interests.