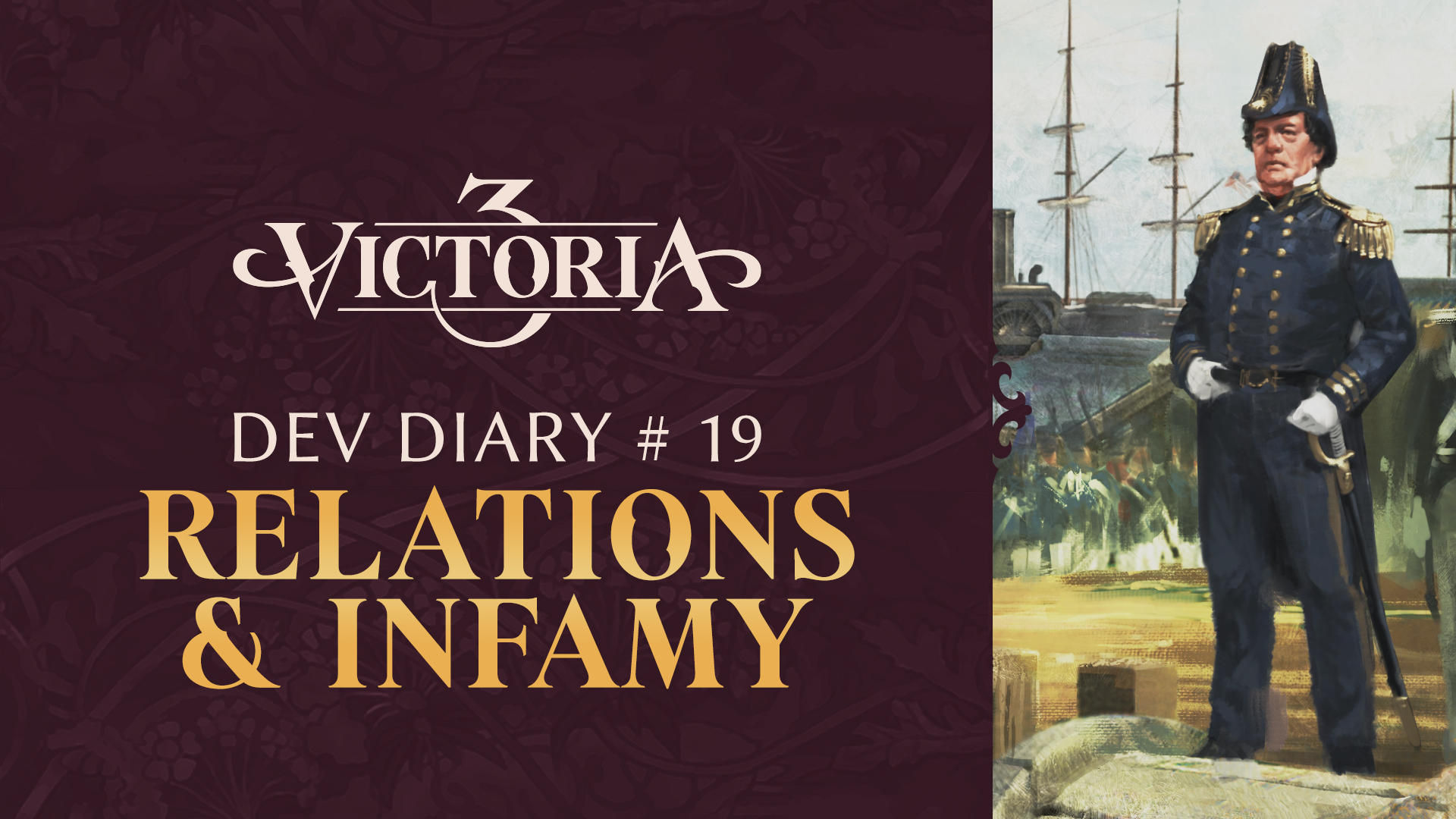 Hello and welcome to another Victoria 3 dev diary! This one is going to be a little bit broad, as we want to go through the fundamental mechanics of Diplomacy before moving on to more specific topics. Today, the mechanics we’ll be going over are Relations, Infamy and Interests, so let’s get to them one at a time, shall we?

Starting out with Relations, this is a value on a scale between -100 and +100 that determines the overall diplomatic standing between two countries, similar to relations/opinion in games such as Europa Universalis and Stellaris. The key difference between Relations here and in those games is that in Victoria 3 relations are bilateral, meaning that while in Europa Universalis France can have a relations of -100 with Prussia while Prussia has a relations of +100 with France, in Victoria 3 these two countries will always have the same Relations score towards each other.

There’s a few reasons for this change, such as making it more clear exactly where two countries stand with each other, but the most important is that we want Relations to be a mechanic with significance and mechanical effects not just for AI countries but also for the player, and even in multiplayer. Your relation number will translate into a relations level, and the different relations levels are as follows (from highest to lowest): Warm (80-100), Amiable (50-79), Cordial (20-49), Neutral (-19 to 19), Poor (-20 to -49), Cold (-50 to -79), Hostile (-80 to -100).

Your relationship with the Great Powers will be especially important, as they are the ones with the global reach to potentially affect you no matter where your country is located 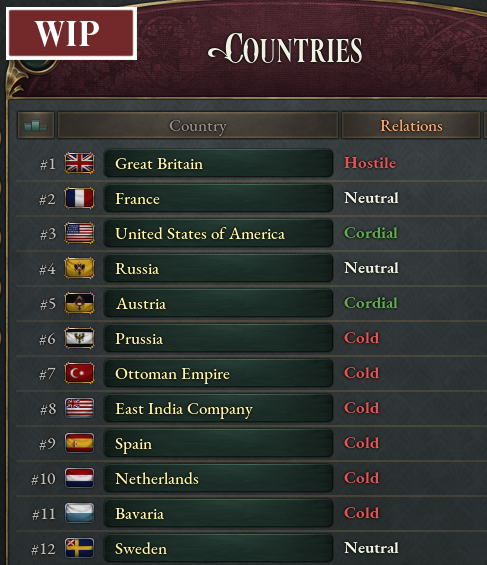 All of these have an impact on the AI’s decision-making in terms of which diplomatic proposals it will accept, which side it will want to join in diplomatic plays, and so on, but besides that there are also limitations on what actions you can take against another country based on your mutual Relations. For example, a relations level of Cordial or above acts as a non-aggression pact: It isn’t possible to start most Diplomatic Plays against a country with which you have that relation level without first acting to reduce said relations. On the flip side, signing and maintaining a Customs Union with a country requires you to be at or above Cordial relations, and there are other actions that cannot be taken unless relations are at other certain negative or positive thresholds.

So, how do you raise and lower relations? The primary way is through the Improve Relations and Damage Relations ongoing diplomatic actions (more on those next week), but there’s many other ways in which relations can be increased or decreased, including various events, Diplomatic Incidents (see the section on Infamy below) and the Expel Diplomats diplomatic action (which we’ll also go over in detail next week), which is a way in which one country can act to prevent another from cozying up to them relations-wise, though at the cost of gaining Infamy.

Here, France finds itself with few friends in Europe – the only other Great Power they have decent relations with is Austria, and it seems like it may not stay that way… 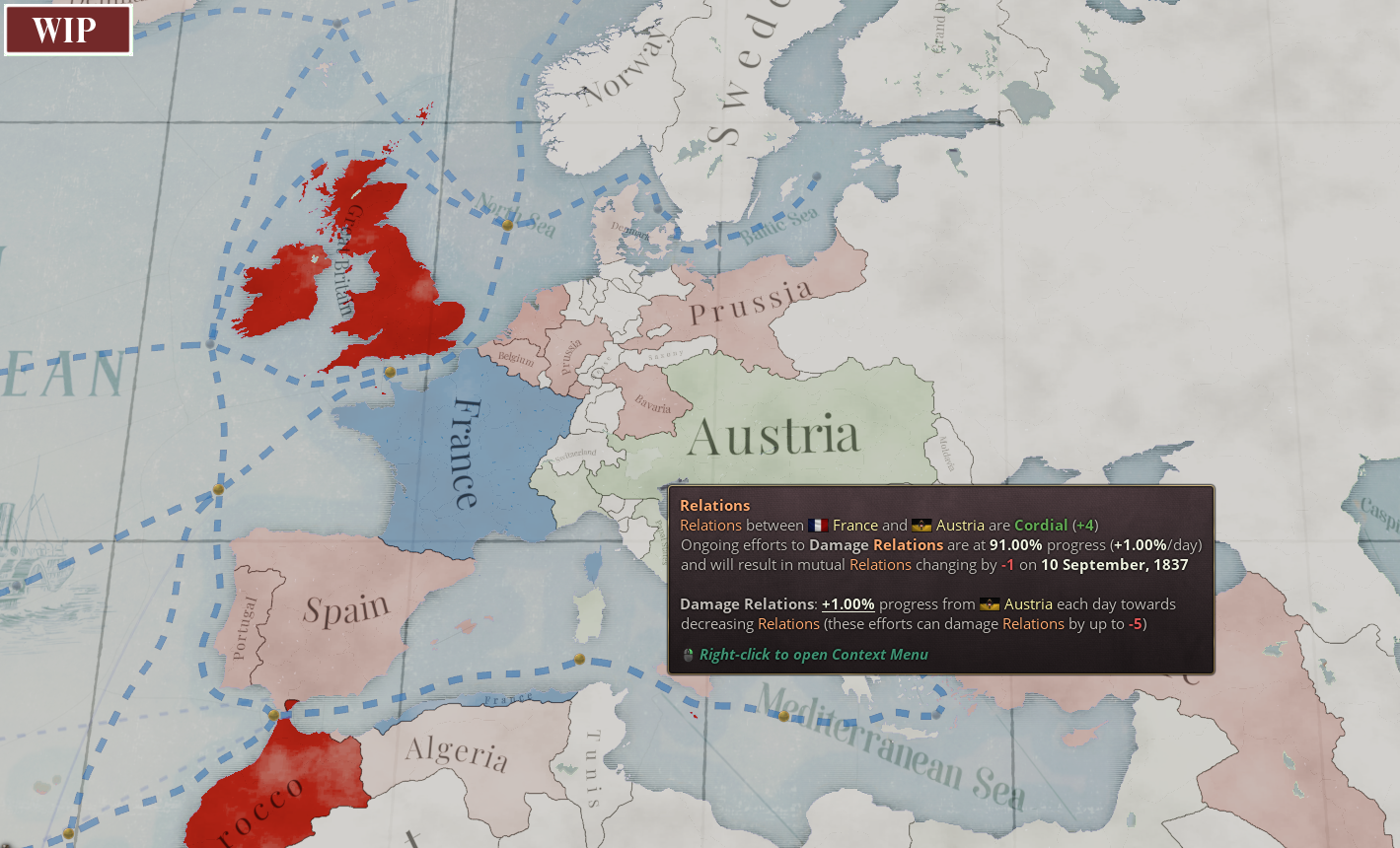 That covers Relations, so let’s move on to Infamy. This is a system we have previously talked about a little under the name of Threat, implying that it works similarly to Aggressive Expansion in Europa Universalis, but is actually something we have since redesigned following tester feedback, as the very localized effects of Threat/Aggressive Expansion did not feel appropriate to the far more globalized Victorian era. The result is something that could be described as a hybrid between older Infamy (or ‘Badboy’ as those of you who have been around Paradox GSGs for a long time might recall) systems and the newer, more localized systems.

In Victoria 3, a country has an Infamy value that starts at 0 and can increase to… well, anything, as there’s no upper cap on it. As a country’s Infamy increases, other countries will become more wary, resulting in various diplomatic penalties for the infamous country.If Infamy exceeds the Pariah threshold (which is currently set to 100) the country becomes a potential target for a special Contain Threat diplomatic play where the Great Powers step in to ‘restore order’. Infamy decays slowly over time, and its rate of decay can be increased if the country has a large amount of unallocated Influence capacity, representing that capacity being put to use trying to salvage the country’s global reputation instead.

After making some aggressive moves against its neighbors, Bolivia’s infamy has increased to the point where they will start feeling some diplomatic effects – though it’s not yet too bad

So far this should probably sound very familiar to anyone who has played Victoria 2, but the key difference between Victoria 3 and its predecessor here is the Diplomatic Incident mechanic tied to Infamy. In the vast majority of cases, any action a country takes (for example demanding land in a Diplomatic Play or violating a neutral country’s sovereignty during war) that increases Infamy will also create a Diplomatic Incident localized at a particular Strategic Region (more on that below) on the map.

Infamy in itself should be understood as a measure of how concerned the Great Powers are about a country, and as such, country Rank has an effect on how much Infamy a country gets when it commits a diplomatic transgression against another. Generally speaking, the lower the rank of the two countries involved, the less Infamy will be generated, as the Great Powers care a lot more about actions taken by and against other Great Powers than they do over two Minor Powers being engaged in a local squabble.

Ultimately, what this means is that Infamy doesn’t just have a global effect, and where you’re accruing it matters. If you keep taking actions that destabilize a particular Strategic Region, you can expect to quickly become very unpopular with both the locals and any outside powers that have taken an Interest in it.

By now, I’ve said the word Interest a whole bunch of times, so it’s probably time to finally explain what they are. To do that though, I first have to explain the concept of Strategic Regions. A Strategic Region is a large predetermined geographic area consisting of a number of State Regions, with the 715 State Regions of the current internal build divided into a total of 49 Strategic Regions.

A look at the Strategic Regions of Europe – do note that as with all parts of the map, this may not be how it looks on release! 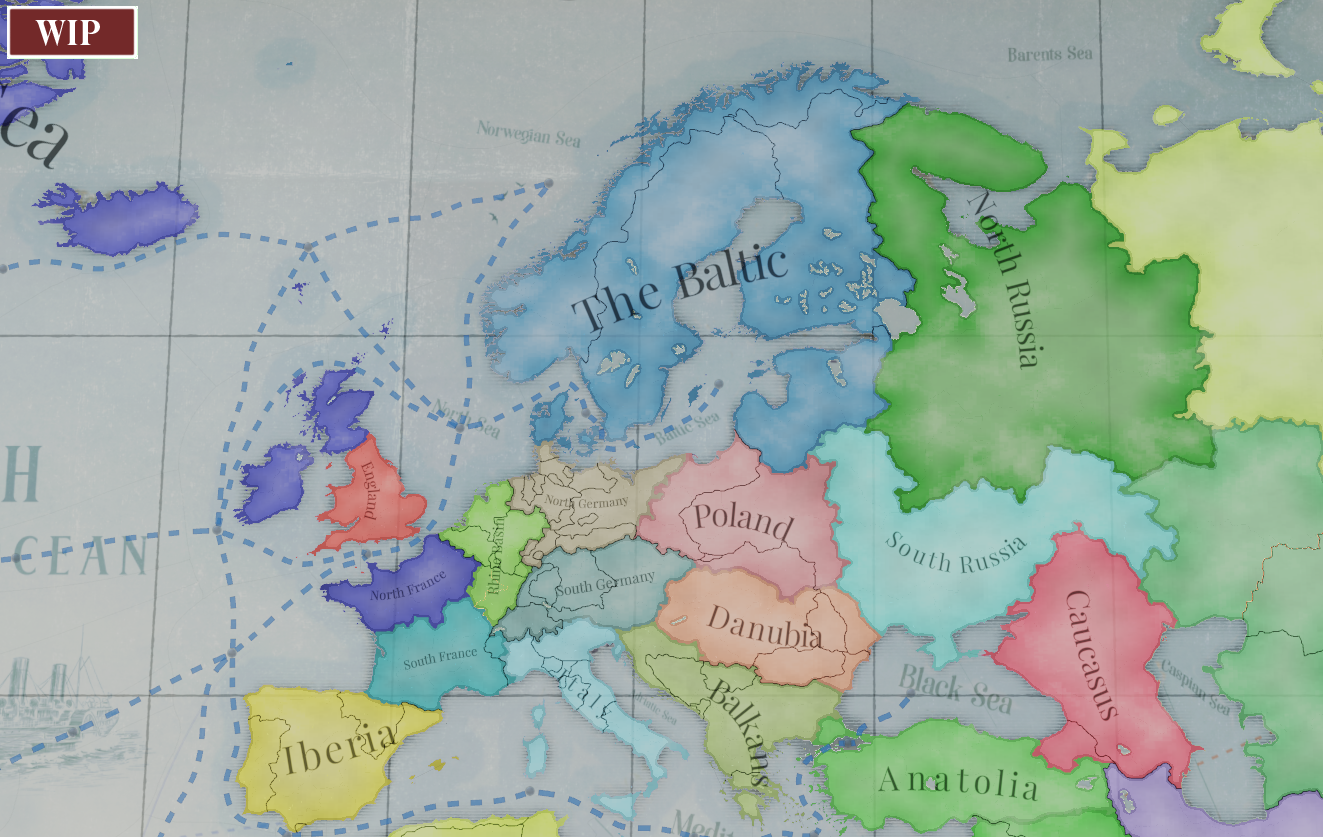 Interests is, put simply, a mechanic that determines whether or not a country has a stake in a particular Strategic Region and plays into numerous different mechanics such as Diplomatic Plays, Colonization and the aforementioned Diplomatic Incidents. A country can gain an Interest in a region in one of two ways: either automatically by having a geographical presence there (owning land or controlling subject nations in the region) or by using a Declared Interest.

A Declared Interest is a country quite simply saying that, regardless of their lack of a geographic presence, a Strategic Region is still of importance to them, perhaps because they plan to colonize it, or because they want to prevent a hated rival from expanding into it. A country can Declare an Interest in any region that is either adjacent to a region where they already have an Interest, or which they can reach through the support of their naval supply network (more on that later!). The number of Declared Interests that is available to a country depends on their Rank – a Great Power can choose to have its fingers in a great many pies, while an Insignificant Power is limited to acting only in regions where they already have land.

You might want to declare an Interest in Persia for numerous reasons, such as checking Russian or British aggression in the region… or as a precursor to seizing colonies there for yourself 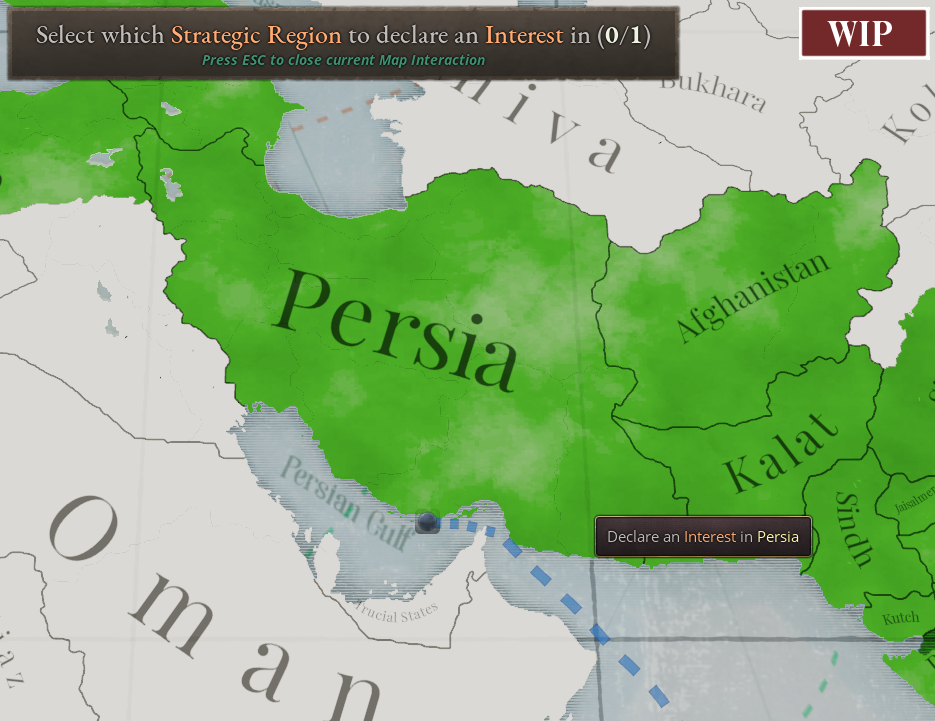 Interests do not provide any inherent benefit to a country besides the ability to throw their weight around in a Strategic Region, and can actually be a bit of a double-edged sword in that a country with Interests all over the world may get dragged into a lot of local conflicts. Ultimately, Interests are our attempt to simulate such historical occurrences as why certain parts of the world simply got a lot more attention from the Great Powers than others at particular points during the century that Victoria 3 covers, and to make nations act and care about things in a way that makes sense according to their national self-interest.

Right then, that’s all for today! Join me again next week as I continue to write lots of words about diplomatic things, this time on the topic of Diplomatic Actions!