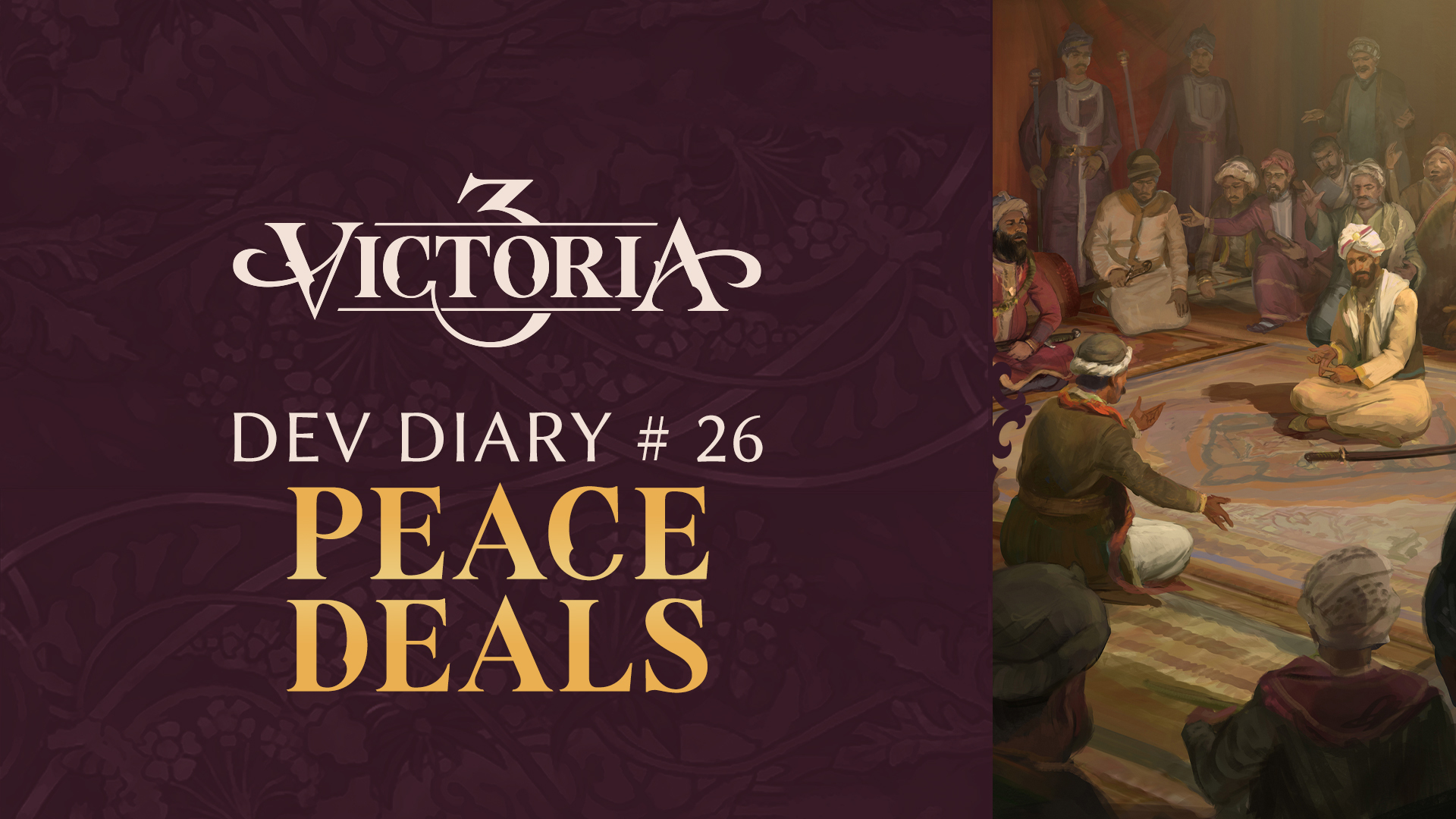 Hello and welcome back to another Victoria 3 development diary! Last week we wrapped up our dev diaries on War, and now we’ll be bringing both Diplomacy and War to a close (for the being, that is) by talking about (appropriately enough) how to negotiate an end to one of your wars. We’re of course not done talking about warfare and will return to the topic at a later point, but for now, let’s talk peace.

So, let’s say you launched that diplomatic play to get the Dutch colony you’ve been eyeing for years thinking that you’d have it in the bag, all the way up until the French decided to back them up and you found yourself dragged into a bloody and costly conflict that you now want nothing more than to get out of. What do you do?

There’s actually two different ways of making peace in Victoria 3: Capitulating and Negotiating Peace. However, before we explain how these work, we first need to explain a crucial mechanic to all forms of peace-making: War Support.

War Support is a measure of the political will in your country to continue fighting in a particular war, and goes from -100 to +100. Each country will start a war with a high degree of War Support (currently always 100, though we’re considering having it start on different levels based on how politically unified your country is), which declines over time. The factors that govern how quickly War Support drops include:

Siam is in a bad way in this war, losing more than 11 War Support every single week. Unless they can turn things around quickly, capitulation isn’t far away. As with the previous war dev diaries, please note that any numbers/interfaces/tooltips shown are very much not final! 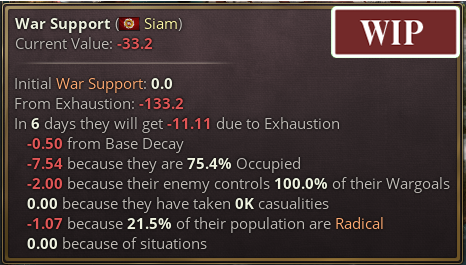 When their War Support hits -100, a country is forced to Capitulate. A country that Capitulates cedes all War Goals that are targeting them and gives up on all unpressed War Goals they were still holding. It’s also possible for most countries part of a war to choose to Capitulate at any time, even right after the war has broken out. This will immediately let them exit the war at the same cost outlined above, but may also incur a diplomatic penalty if the country capitulates early, especially if they had nothing to lose by doing so (as it would be seen as a cowardly betrayal of your allies). War Leaders are also able to Capitulate, and this doesn’t usually end the war, as they are only conceding War Goals targeting themselves and their subjects, and a new War Leader will be chosen to continue the fight on their side of the struggle. The only circumstance under which a Capitulation will end a War is if there are no War Goals left to fight over, which always results in an immediate end to hostilities.

However, it isn’t possible to simply attack a far-away country and force them to cede you distant lands simply by waiting for their War Support to tick down by itself. This is because any country that has a war goal targeting it which isn’t considered to be controlled by the enemy and still retains control of its own capital cannot have its War Support drop below 0. For example, let’s say that while playing as Brazil, you attack the Netherlands and demand they cede both Curacao and Guyana. You easily occupy Guyana but find that your navy is outmatched and you can’t land armies to take either Curacao or Amsterdam. As a result, you will be unable to force the Netherlands to Capitulate unless you actively choose to drop your War Goal on Curacao.

It’s possible to capitulate at any time during a war, even when it’s just started and War Support is at maximum – that it’s possible definitely doesn’t mean it’s a good idea, though! 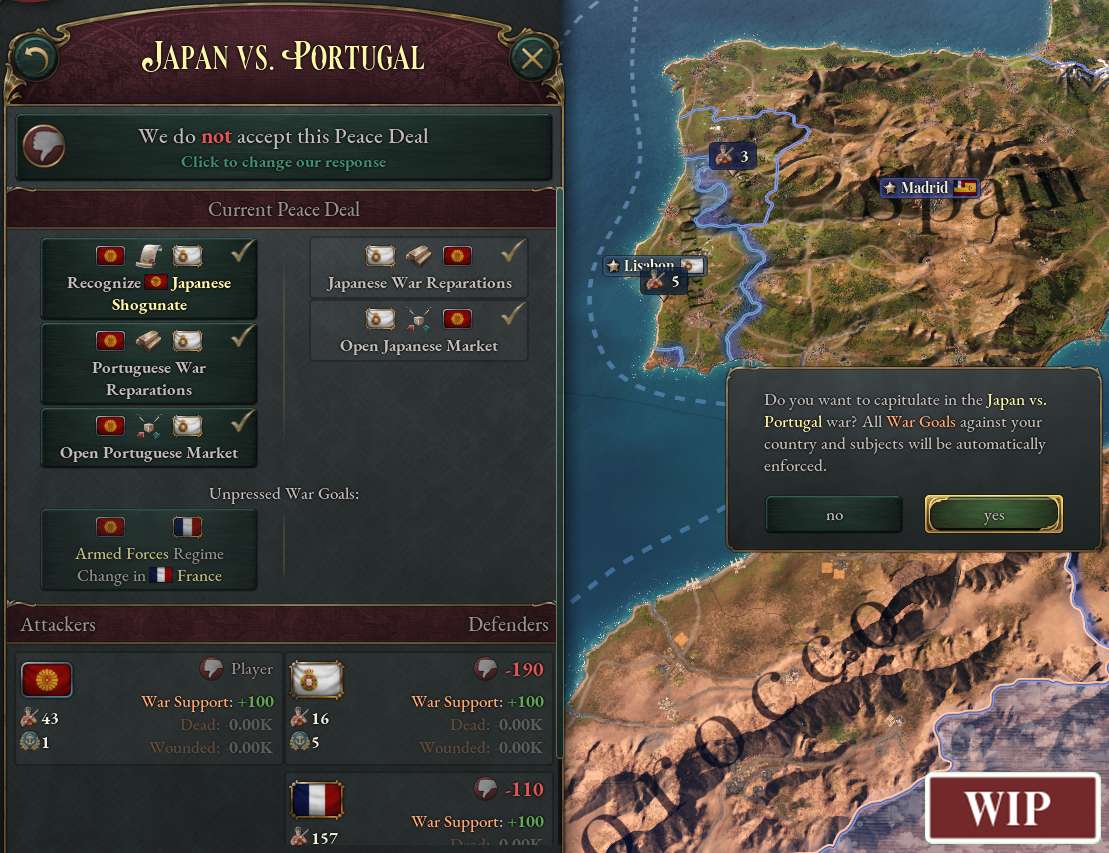 So what then, of negotiated peace? This is quite a bit more complex than Capitulation, and can involve a whole host of countries that are part of the war. When making peace, countries involved in a war are split into three different categories:

War Leaders: This is the main participant on each side. War Leaders can propose peace deals and must ratify any proposed peace from the other War Leader in order for it to take effect.

Negotiators: This is any country that either holds a War Goal or has a War Goal targeting them and who are not one of the War Leaders. Negotiators must ratify any proposed peace deal from both the enemy and their own side in order for it to take effect.

Non-Negotiators: This is any country that doesn’t fall into the above two categories. They don’t play any active role in peace negotiations. Subjects whose Overlord is part of the war are also considered Non-Negotiators, as their Overlord negotiates on their behalf.

For a negotiated peace to happen, the War Leader on either side must first construct and propose a peace deal out of pressed War Goals. Unlike in many of our other Grand Strategy Games, peace deals in Victoria 3 isn’t necessarily just one side making demands – the War Leader can propose a mixed peace deal, in which War Goals are ceded from both sides. Once the War Leader is satisfied with the deal they’re proposing, they then send it out to both sides of the war for ratification.

This rebellion against Britain has turned into something of a brush war between the European Great Powers, with limited fighting in the colonies between Britain and its enemy France. War Support remains high, but if things take a bloodier turn both sides may find their populations quickly growing weary of the fighting. 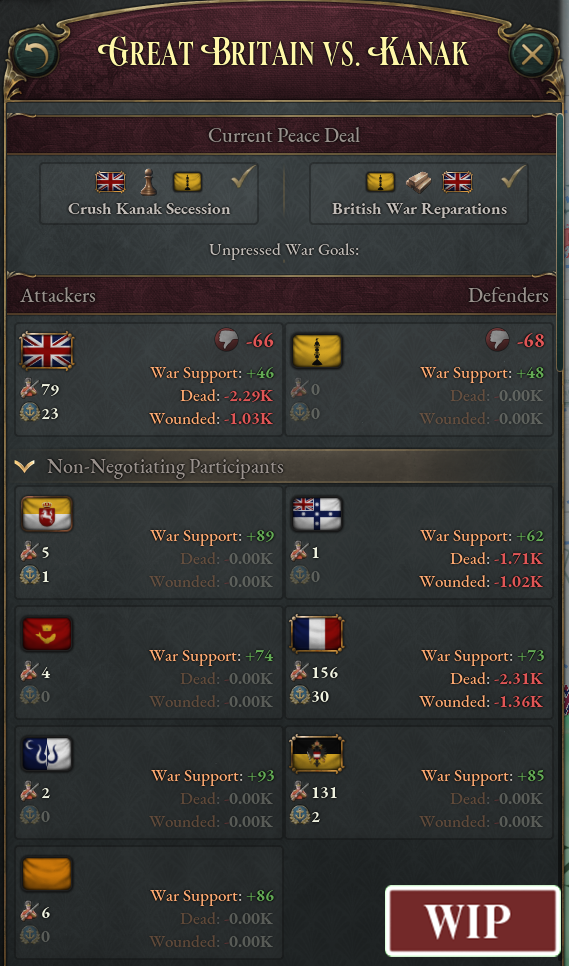 That’s right – in order to have your proposed peace deal take effect, you need not just the enemy War Leader or even the enemy War Leader and Negotiators agree to it – all Negotiators on your own side must agree as well. This means that while you can try to cut a deal with your Dutch enemy to give you everything you want from them in exchange for selling out your ally Prussia, the likely answer to that from Prussia is going to be a firm and resounding ‘No’, at least so long as they aren’t truly desperate for a peace. However, if you’re willing to be fair about the whole thing and give up something of your own as well, they’re going to be more receptive to your proposals.

War Support plays a key role in determining what kind of peace deals the AI will agree to, with both their own and the enemy’s War Support factoring in: Even if their war support has dropped into the negative, the AI isn’t going to agree to a long list of demands from a country that is themselves a few weeks away from capitulating.

That’s all for today! Now that we’ve talked about Economy, Politics, Diplomacy and War, join us again next week as we cover a topic that touches on all of them – Technology!