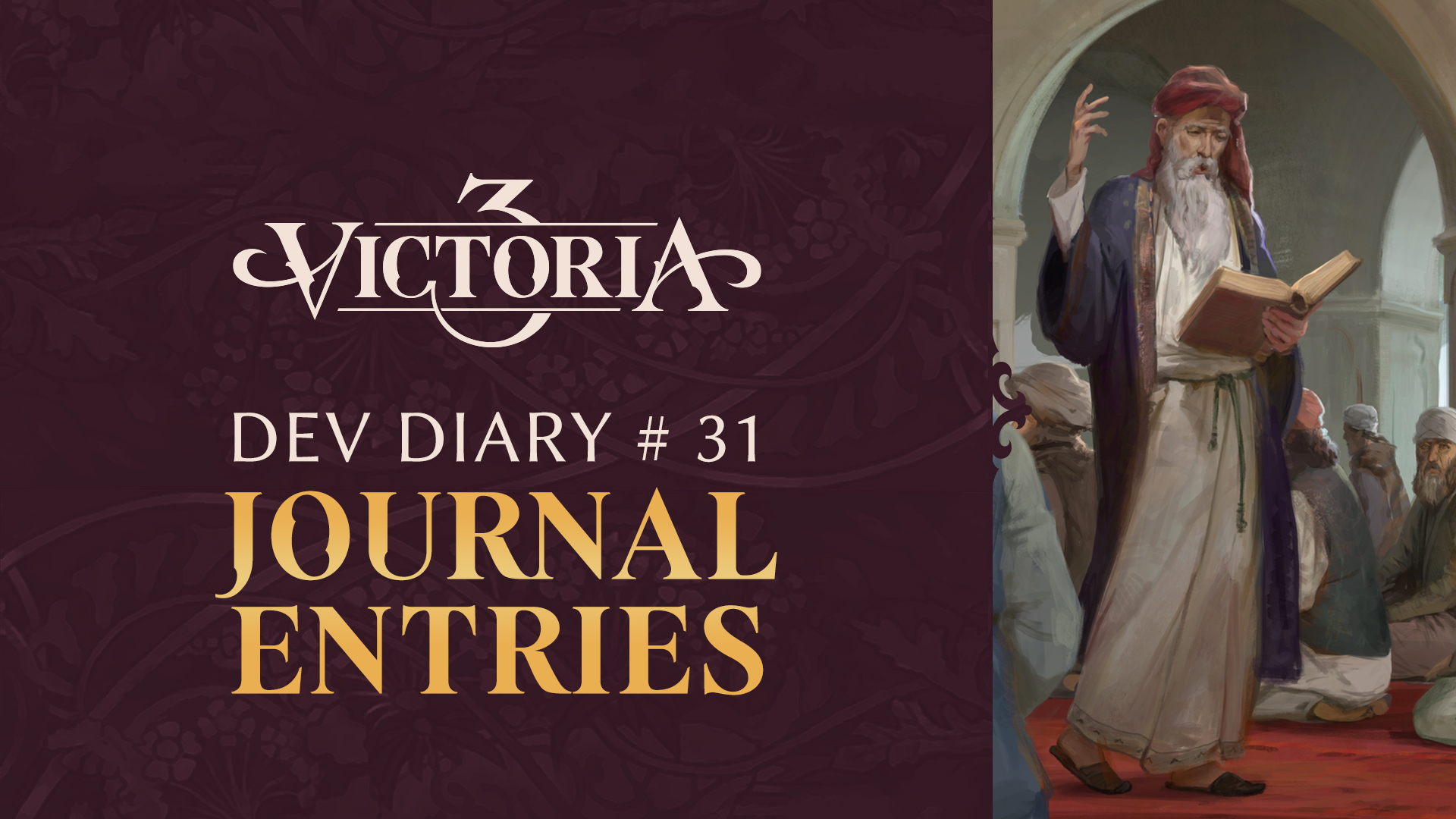 Hello and welcome to this week’s Victoria 3 development diary! My name is Daniel and I’m the Content Design Lead for the project. Today we’ll be taking a first look at Journal Entries.

Upon the death of King William IV, the personal union between Great Britain and Hanover ended due to different laws of succession. Queen Victoria ascended the British throne, while Hanover was ruled by William’s brother Ernest Augustus. This Journal Entry highlights the imminent end of the union. 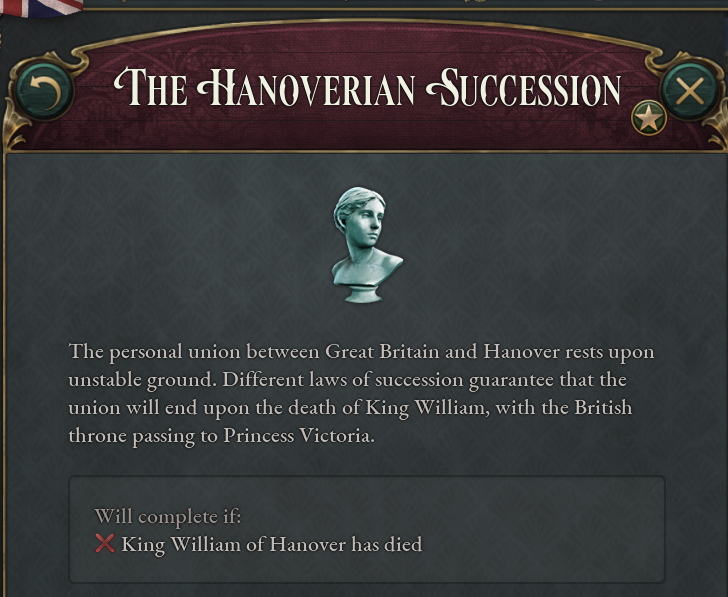 Compared to Victoria 2 we’ve shifted the focus of scripted content away from random event popups and towards the Journal system. Journal Entries fulfill a variety of narrative and mechanical purposes in Victoria 3 – they can be optional goals the player can pursue, imminent disasters, anchors for ongoing situations, and much more. You can think of the Journal as items on the government’s agenda, situations that you can engage with (or not) to whatever extent best fits your goals and situation.

In 1836 Canada was administered by several colonial governments, including Upper Canada (modern Ontario), Lower Canada (modern Quebec), and the Hudson’s Bay Company. By the end of our period they were consolidated into a single Canadian nation.

Here we can see some potential entries in the British Journal. Inactive Journal Entries serve to announce potential goals you might want to pursue or disasters you might want to avoid, depending on what you’re aiming to do with your country. Many Journal Entries have an effect upon activation, usually an event presenting the situation to the player both narratively and mechanically, and sometimes offering different approaches to the issue. The Confederate Canada Journal Entry leads you as a colonial overlord down the path of consolidating your Canadian subjects into a single nation. To begin this process you’ll need to research Nationalism, but there are also hidden triggers that determine whether this should appear in your Journal as a possibility at all. In this case the Journal Entry is potentially available for any country that has Canadian subjects; this means that this content is not exclusive to Great Britain, but available to any country that fits the bill.

This is reflective of our goals for historical content in Victoria 3. We want to avoid arbitrary historical events that occur for specific countries even when they don’t make sense in relation to what’s happening in the game. We also want to avoid writing content that only happens for particular state actors under hyper-specific conditions, making it all but invisible. So historical content should be both emergent and visible to the greatest extent possible.

The Ottoman Empire was in a period of steep decline by 1836. Despite attempts to modernize the country, it was not able to retain its dominance and fell to the wayside of history, eventually collapsing to nationalist movements and the machinations of the great powers. In Victoria 3, you have the opportunity to steer history in a different direction. How would an Ottoman resurgence affect the world?

Though we certainly do have nation-specific content. Above we can see that the Ottomans are dealing with The Sick Man of Europe Journal Entry series. There are quite a few features a Journal Entry can have. Progress bars can track completion (or failure!) of Journal Entries based on specific variables. Journal Entries can also have a timeout, which might have an effect when it expires, in this case a very negative consequence for failing to reform the country. In other Journal Entries we use timeouts to create limited-time opportunities you can take advantage of if you’re willing to commit to a goal. Additionally, there are pulses that can be added to Journal Entries that have effects on a monthly/weekly/yearly basis, and we can use these to, for example, measure that a set of objectives has been true for a certain amount of time. All of this is entirely written in our scripting language and is therefore extremely moddable.

Following the end of the Sakoku era and Shogunate rule, Japan modernized rapidly. A major transformation of society and the economy proceeded, and the great powers watched with interest. Will you be able to guide Japan towards a prosperous future, striking the balance between modernization and sovereignty? 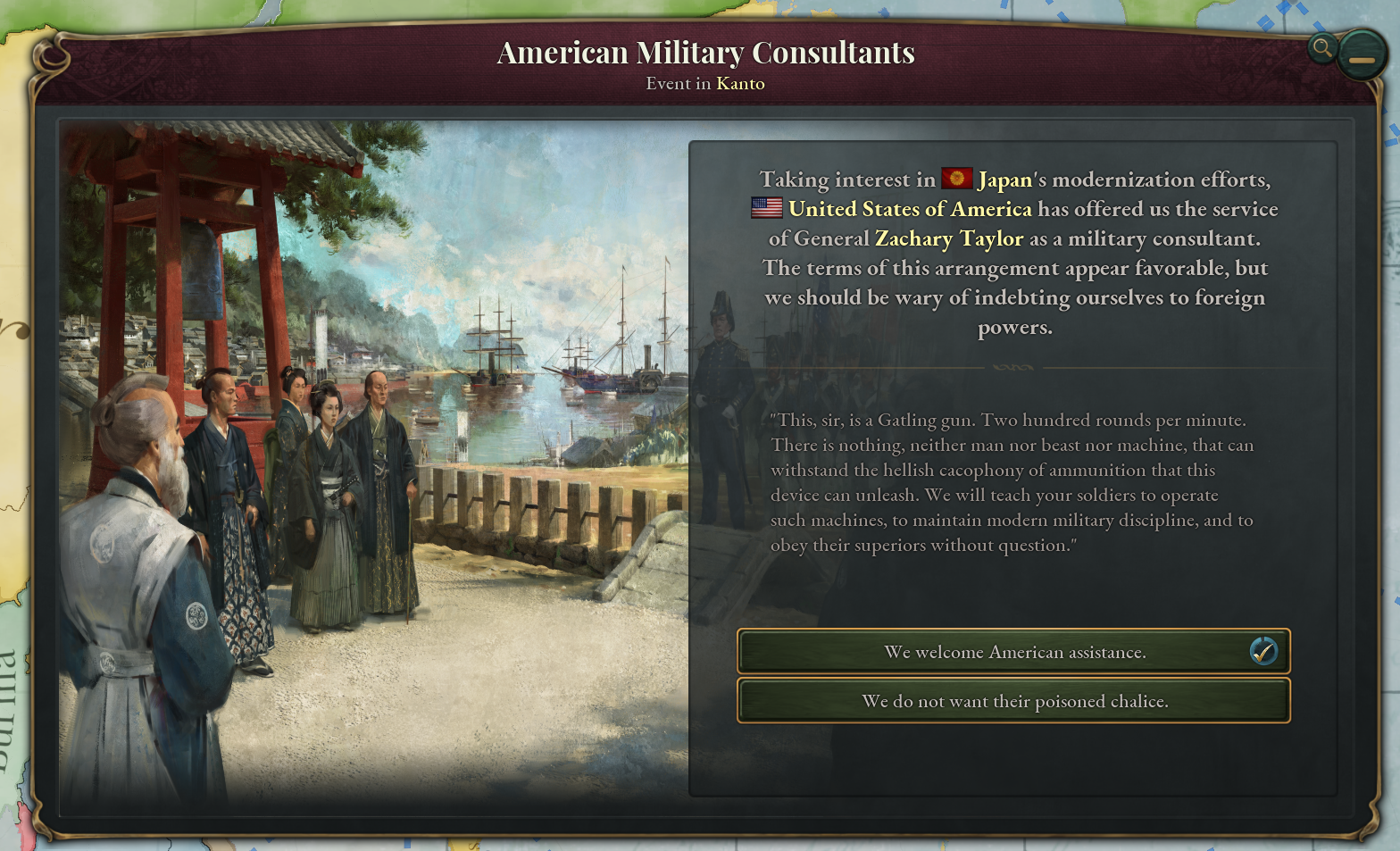 While a Journal Entry is active, various events might occur in your nation. Here for instance a modernizing Japan considers an offer of American military consultancy. Active Journal Entries might also unlock Decisions – one-time actions a country can opt to take – or have a multitude of effects and modifiers while they remain in play.

The Great Molasses Flood of 1919 saw the city of Boston inundated with treacle due to a burst storage tank. Investing in the safety of your industries is important if you wish to avoid such accidents becoming commonplace. 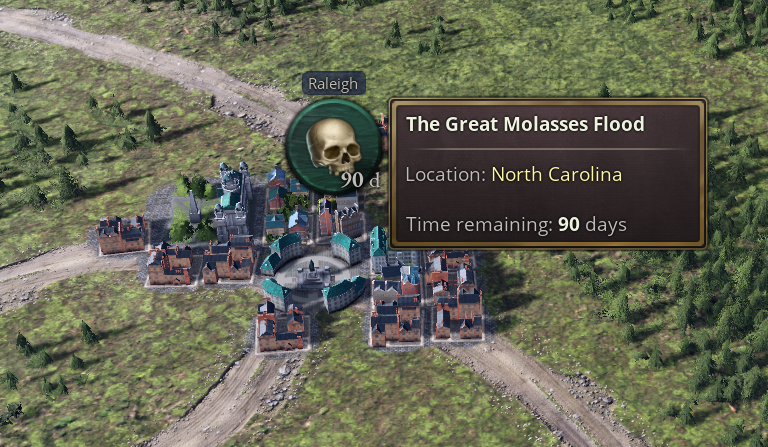 On the topic of events, there are now extremely few “pop-up” events that immediately demand the player’s attention. Events now appear both in the outliner and on the map itself, and can be opened and minimized at your convenience.

Journal Entries are a dynamic and versatile system used to represent a wide variety of era-inspired situations and historical content, and to make the game world feel narratively alive. The possibilities for this system are practically limitless and I expect we’ll continue to innovate with it for a long time to come – and with its incredible degree of moddability I look forward to seeing the community’s own creations as well.

That is all for today! Next month we’ll be donning our pith helmets and centering our development diaries on the theme of colonization and exploration.