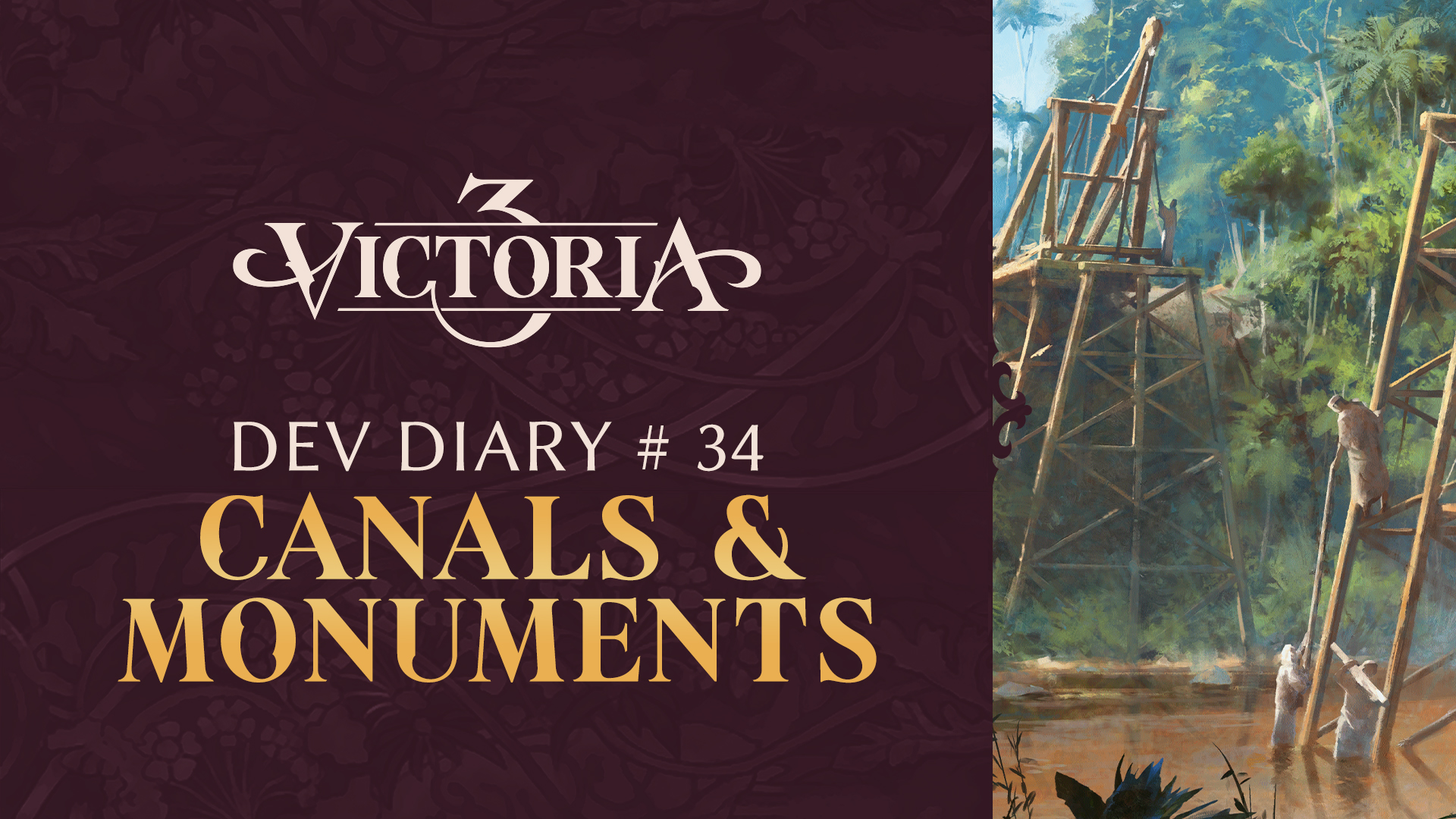 The Vatican City is the seat of the Catholic Church and a great asset to the Papal States in Victoria 3. As Europe developed and industrialized, the power of religious authority in national politics declined steeply but never lost its relevance. Can you change the course of history and renew the temporal power of the Pope? 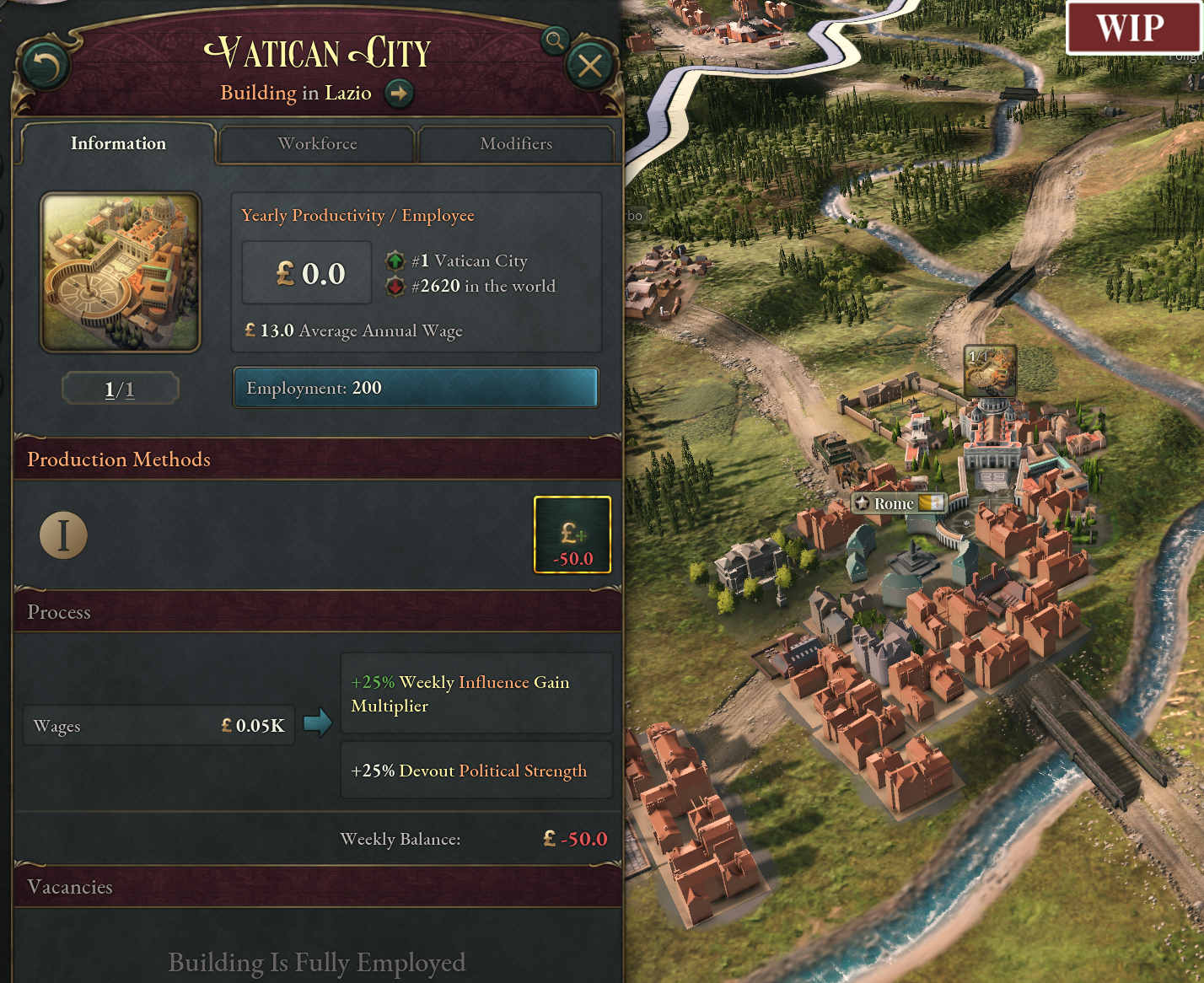 Monuments are unique buildings only available in specific states, each with its own 3D model on the map. They make use of some of the more interesting aspects of the production methods system; just as buildings can output Goods, they can also output both national and local modifiers, Capacities, and effects on the pops working there. The Vatican City for instance outputs the Influence capacity as well as greatly increasing the political strength of the Devout Interest Group. Meanwhile the White House adds a multiplier to your national Bureaucracy output as well as increasing the amount of political strength Pops gain from votes. Not all Monuments are present at the start date. Some, like the Eiffel Tower, must be constructed, and Monuments are significantly more costly and time-consuming to construct than standard buildings. Monuments are subsidized by government funding, so if you decide that a Monument is unaffordable or that you aren’t interested in its effects (for instance if you as communist Italy no longer want to Church to wield so much power) you can simply defund them. On release we intend to have eleven different Monuments in total.

The Panama Canal links the Atlantic and Pacific Oceans. Finally completed in 1914 after decades of planning and construction, ships no longer had to take the long and treacherous route around South America to travel between the East and West. Yes, we can see the trees and houses in the Canal – we’ll fix it! 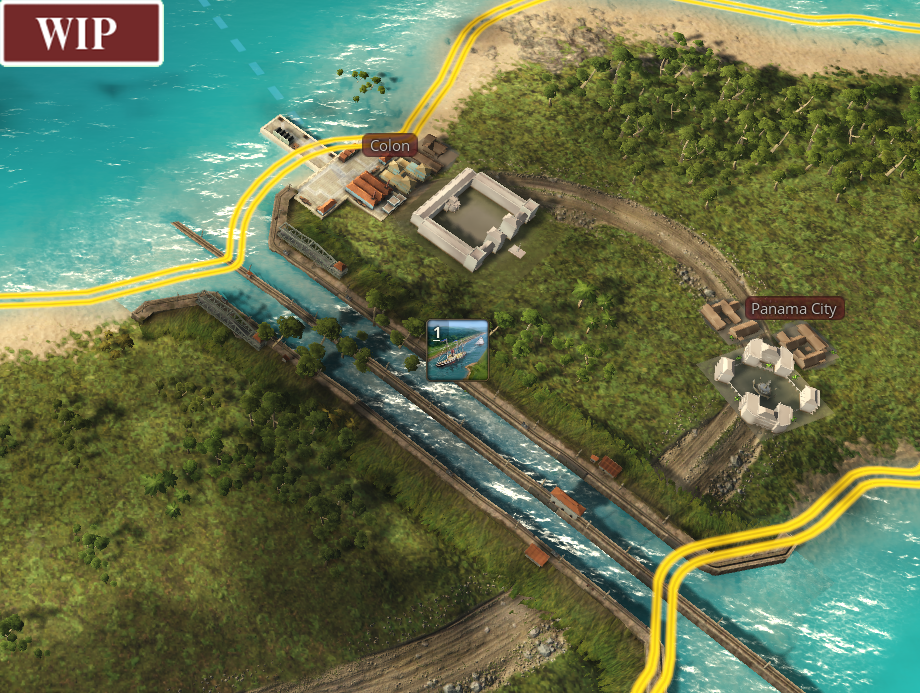 Like Monuments, Canals are unique buildings with a special set of inputs and outputs. But the true allure of constructing a Canal is that it allows you to create new connections between sea nodes, allowing ships to travel through the isthmuses of Panama and Suez. This significantly reduces the Convoy costs for trading and supplying armies across vast ocean distances, as well as your vulnerability to unscrupulous rivals trying to disrupt your supply lines.

We use the Journal Entry system to track the progress of your canal survey. Behind the scenes a variable is increased every month until the goal is reached, which triggers the completion event. The Journal Entry also acts as a reminder that you are spending a lot of Bureaucracy on this project, and that it will eventually be made available again once the survey is complete.

Constructing a Canal is far from trivial. Before any work can begin, an extensive survey of the region needs to be conducted, costing a hefty chunk of Bureaucracy for the surveyor for around 3 years. Either the owner of the state or a Great Power with an Interest in the region can conduct a survey. Any number of countries can potentially conduct their own surveys and compete to build the Canal themselves.

We’ve made the conscious decision to avoid starting wars or Diplomatic Plays through scripted content wherever possible, instead offering incentives for the player to start their own Plays and encouraging the AI to pursue Journal Entry goals. In this case, the player has the option to either gain a Claim on Sinai or to improve relations with the owner country, helping you along your chosen path but not locking you into a particular course of action.

Once you’ve completed your survey, the path diverges depending on whether you own the appropriate land. If you already own either a Treaty Port or the whole state region you can simply begin constructing the canal, but if not you’ll need to find a way to acquire it, either through monetary or coercive means. A Decision becomes available allowing you to purchase a Treaty Port in the appropriate State Region in exchange for a series of very large weekly payments, assuming you can convince the local rulers to part with the port. You might however decide that you’d rather keep your money and start a Diplomatic Play for a Treaty Port or the entire State Region (the former will cost you a lot less Infamy), which might lead either to a peaceful concession to your demands or to war.

And that’s all for today! Next week I’ll be handing you over to one of our Content Designers to talk about Expeditions and Decisions.