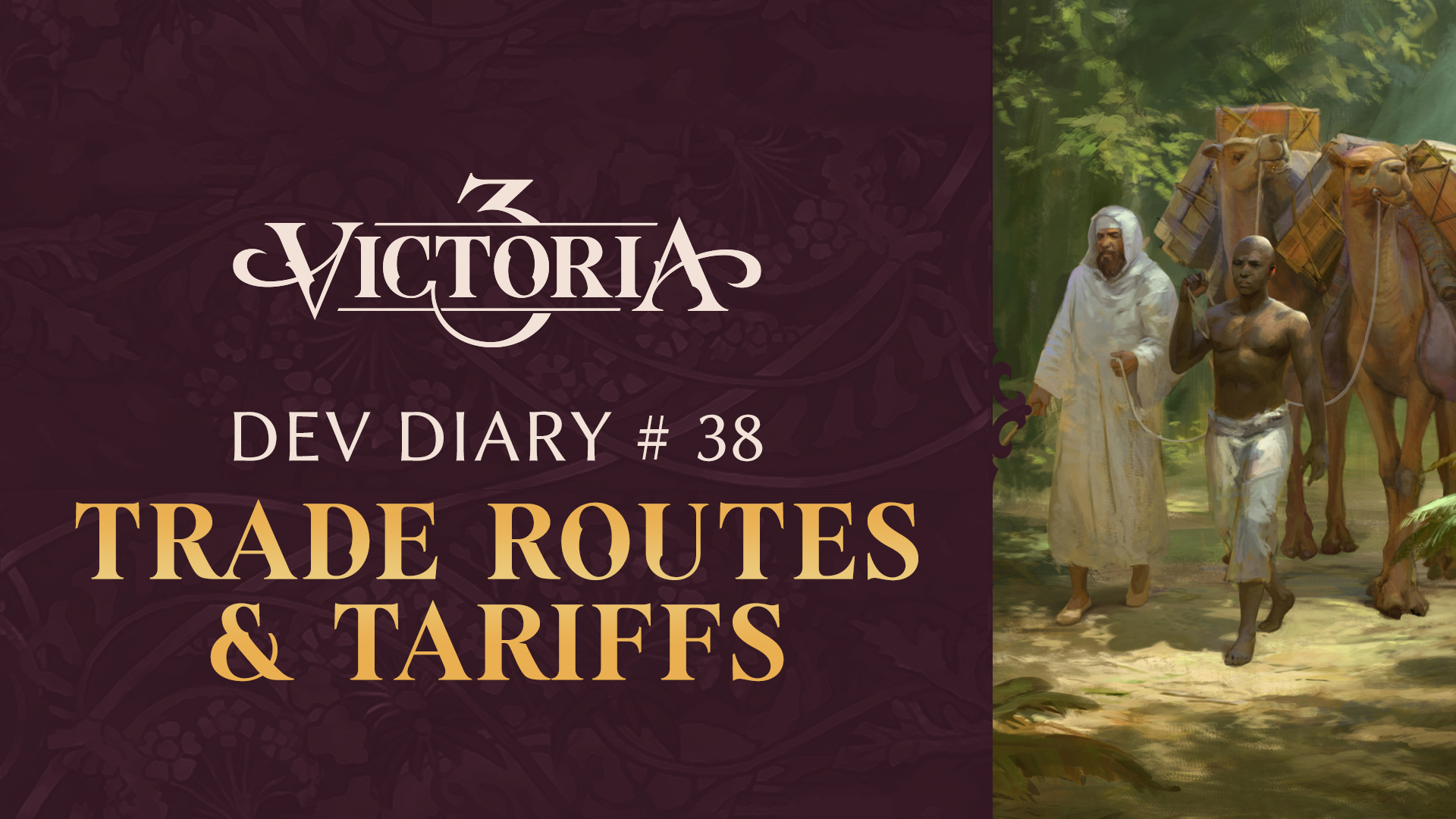 If money is the sinews of war, then trade is the lifeblood of nations and in no period is this truer than the Victorian Era. Victoria 3 takes place in a period of time where the nations of the world pushed this concept further than before, through a period of industrialization and growing interconnectivity of first homelands and colonies and then among nation-states themselves. The trade routes on the map connecting our nations became the fabric that underpins many of the understandings of our modern world today.

But what is trade? It may seem obvious to some but to better understand the systems we need to make sure we understand the foundations they are built upon. Thus, trade is understood to be the movement of goods between two markets as a means of commercial transaction so that the other party is effectively paid for their services. Trade is not conducted between businesses and/or nations but is instead conducted through their national markets and by proxy their trade centers. While this may not seem a meaningful distinction, the market and economy of a nation is not synonymous with its national government; while that government may attempt to influence the economy it does not always have an absolute degree of control over it. Thus the trade that goes on in your market is something that you can influence and encourage (or discourage if you like) but never fully control (unless you are the only nation in existence I guess?).

While trade takes place between national markets at the behest of players and AI, it is conducted in the trade centers of those respective countries. Trade centers function similarly to urban centers, talked about in a previous dev diary. These are not buildings that are constructed manually but develop as a result of their engaging in trade routes as they are representative of the many gray areas of industry that necessitate the collection and movement of goods.

If you were to create an import route of goods for your industries, a resulting level of trade centers would develop within your nation. While urban centers tend to develop where you have placed many industrial buildings, trade centers develop in the market capitals and the ports of your nation. While you cannot paint the placement of trace centers outright, you can influence their development by creating ports in states that are naturally suited to such, where infrastructure and pops are readily available to staff them.

Where there is a port and people, there is likely to be trade, and hopefully profit! 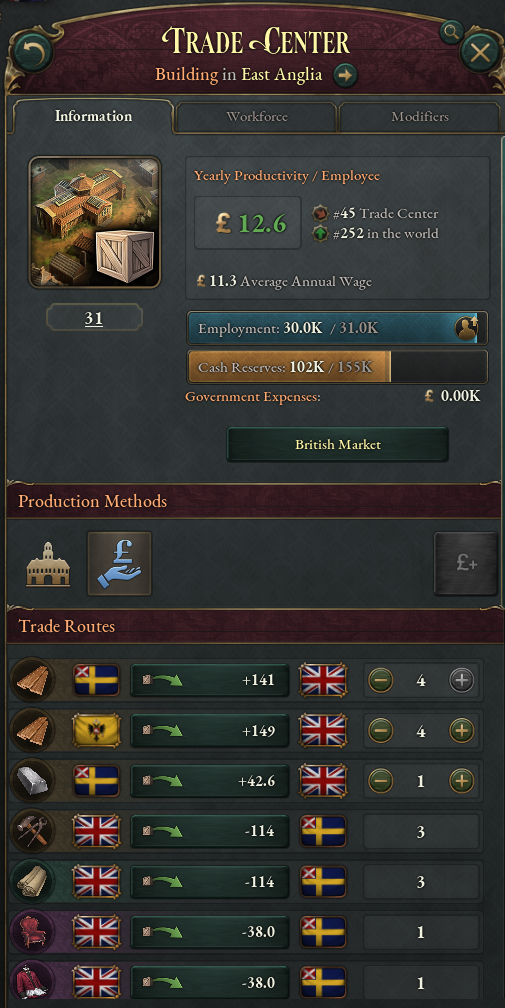 Yes, trade centers must be staffed. Goods do not just appear in one nation from the next but require the maintenance of bureaucrats, laborers, clerks, and the like to offload and onload cargo, take account of it, tax it, and move it forward. These are for the most part privately owned enterprises that normally have capitalists in charge, instead of government run services. Without pops staffing your trade centers you will find yourself unable to conduct trade in accordance with your aspirations but that shouldn’t be too hard to manage as trade centers have also been historically known to be centers of migration, the first stop of migrants both domestic and international seeking a better life and sometimes finding it.

All the goods moving to and from New York means it’s easier for Pops to hitch a ride. 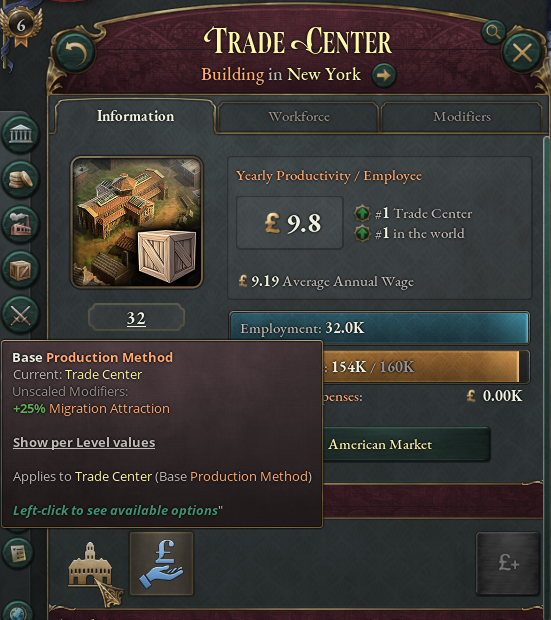 Trade centers collect revenue on both sides of the routes they manage, in relation to how many goods are moved and how much the routes affect the prices in their respective markets. This revenue is allocated to the employees and taxed by the same logic as any industry, so who makes money off your trade is related to your domestic policies in the same way as the rest of your economy.

While trade is something every nation can take a part of, how they affect trade in relation to conducting it efficiently, preventing it when it hurts them, or profiting off of it when they can is dependent upon its trade policies, which are in turn dictate how a nation can set its policies of embargoes and tariffs. Yes that’s right, I said tariffs, cue historical excitement of the fanbase.

Where at first there was one law category, now there are two!

We’ve done a little restructuring of the economic laws in Victoria 3 since we wrote the Law dev diary, where originally your economic system affected both your domestic and international situations. It has been broken into economic systems which now cover the domestic economy,  and trade policy which covers your international endeavors. As such trade policy governs how you interact with a customs union, your ability to set embargoes and tariffs, as well as the general efficiency of your conducted trade.

The Trade Policy laws are broken down into the four categories of ideology relative to the time period which interact with each of the economic systems you can put into place domestically.

Embargos represent the ability of a national government to extend its influence in protecting its national market and subsequent interests. Most, if not all nations can engage in embargoing a good but their effectiveness of doing such is dependent upon the trade policy the national government is centered around. A government centered around the ideas of protectionism has an easier time implementing a more efficient embargo on goods vs those that are committed to a more mercantilism or free trade policy. Notice I said influence, not authority there? While it costs authority to enact taxes domestically it costs influence to place embargos as whether or not they are able to be enforced is dependent upon your ability to influence other nations to respect them. Refusing to make fair trade deals will strain your diplomatic corp.

Protectionism means that not only are embargoes easier to maintain, they are also more efficient.

And now for the potentially more controversial statement, embargoes are not absolute. Sure you may embargo trade of a specific good into your country but that’s not going to stop it outright, only hinder the ease of its trade. Another nation might try and continue to push goods into your country but it will certainly require more of an effort to facilitate such, it all depends. In history there’s certainly something we can agree upon, embargoing something, making it illegal, or hindering its trade reduces the flow of the good but does not stop it outright if there is a vested interest by another nation and a profit to be made.

Tariffs are the means where a national government extends its influence as an intermediary in the trade between national markets, if not for the means of protecting its national interests, to at the very least ensure it gets its fair share of the profits that such entails. Tariffs are set on both exports and imports leaving the national economy because yes the government is interested in its fair share and if it cannot get the revenue by means of a consumption tax it will find other means. The ratio of this tariff level is dependent on the trade policy set. A more mercantilist trade policy would seek to ensure exports exceed imports so tariffs on imports will undoubtedly be lower. Protectionism is equal in its ratio as it seeks to shelter the domestic economy from booming or busting on either side of the equation. Free Trade, well free trade cares not for tariffs and seeks to profit through other means.

While the laws set the tariff ratio of import/exports these can be customized further in the budget screen by setting their tax levels. Tax levels don’t just bring in revenues but offer incentives to your economic actors, your pops. Lower tariffs encourage trade while higher tariffs will hinder their efficiency because well if the nation is getting a bigger cut, how motivated can you expect the pop to be in engaging in such trade?

A higher tariff means minimizing the profit to be had by business and disincentivizing trade.

So how do treaty ports play into these systems, as they certainly existed during the time period? Treaty ports are a means to ensure that you have access to a national market despite such embargoes and tariffs. They are a wedge in the barriers to trade another nation may put up so the goods may be funneled out of the market. Treaty ports have the special function that they permit the bypassing of embargoes and tariffs set in land adjacent markets through trading. They are a more permanent means of opening the market to your access but in the same vein also require a more permanent investment. Since treaty ports are first and foremost ports they will certainly become trade centers and will require the infrastructure and staffing to function. As you invest in this profitable endeavor, be aware that you will need to protect such from the eyes of other imperialist nations who might seek to take it away from you.

At game start Portugal finds itself holding the Treaty Port of Macao, a very profitable trade endeavor, but will such profits attract the attention of greater powers? 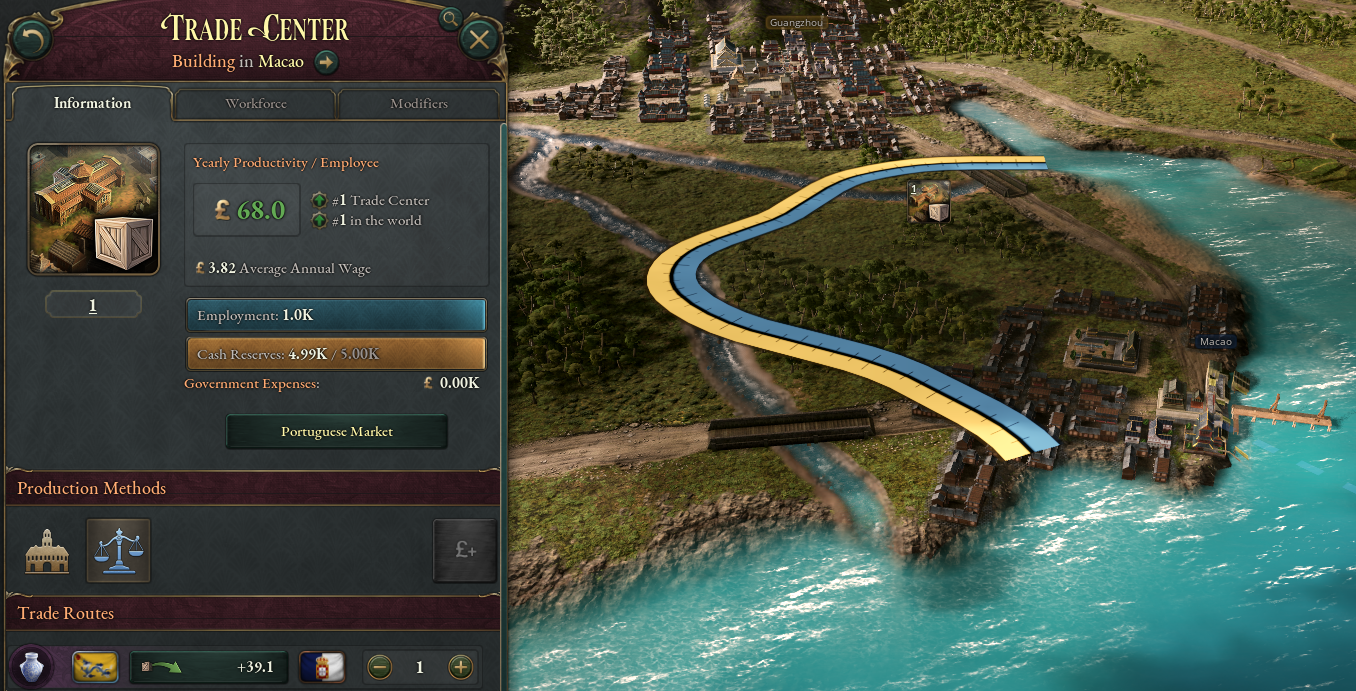 How do Customs unions come into play here? If you recall from the previous developer diary, customs unions are an agreement between one or more nations where one nation agrees to subject itself to another’s national market. By agreeing to subject your national market to another nation you are agreeing to take on the structure set into place by their economic system and policies. While you are still able to enact trade between that national market and another you lose the ability to set embargoes on specific goods and tariff policies across the market, though you do receive your contributing share of the profit of such tariffs. Sometimes this development can be beneficial, sometimes it can majorly hurt your national sources of income, as the previous dev diary goes to great length to summarize “it depends.”

And that’s a bit about trade, tariffs, and more! I may not have succeeded in delivering a concise explanation this time but it’s certainly a shorter one. Next week is going to be the Kaiser himself (Johan Jons) to talk about Shipping Lanes. I’ll let the fanbase craft their own conspiracy theories about whether or not we are being literal with that one.