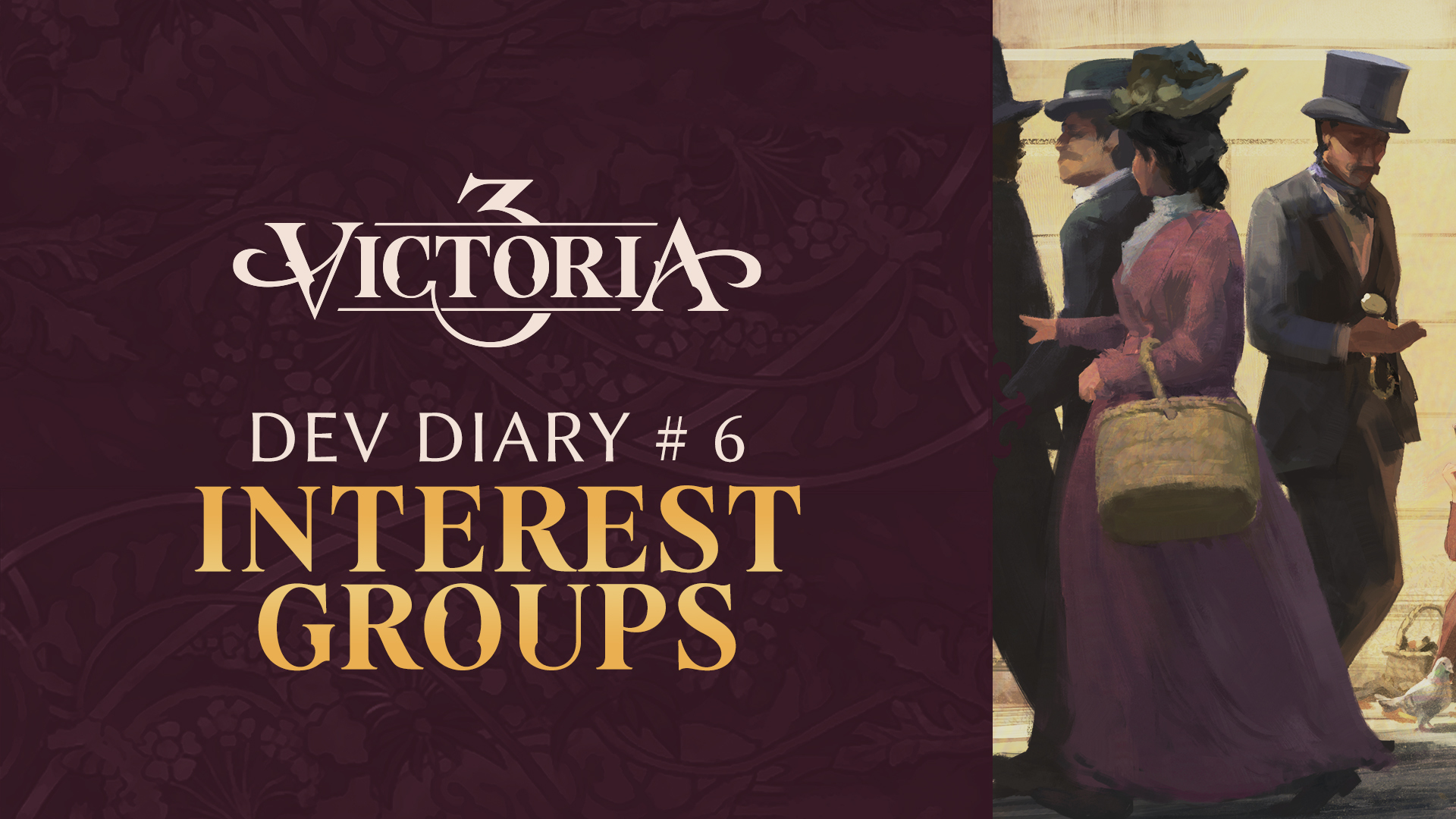 Hello once again and welcome back to yet another Victoria 3 dev diary. Where previous dev diaries have been focusing on the economy, we’re now going to switch gears to another core pillar of the Victoria series – internal politics! More specifically, we’re going to be talking about Interest Groups, which form the nucleus of Victoria 3’s political gameplay.

What then, are Interest Groups? Fundamentally, an Interest Group is a collection of pops that espouse certain political views and want to change the country to be more in line with those views. Interest Groups are drawn from a number of different templates, but will vary in their exact views from country to country, based on factors such as the local religion, which social movements have appeared in the country or the personal views of their leader.

As mentioned, Interest Groups are fundamentally made up of Pops – all individuals in all Pops are either members of an Interest Group or Politically Inactive, with the ratio in each based on factors such as Profession, Wealth, Literacy etc. Individuals inside Pops contribute Political Strength to their Interest Group of choice, with the amount they contribute again dependent on multiple factors, the main ones being their material Wealth and the status (and/or votes!) they are offered under the nation’s power structure.

For example, a single wealthy Aristocrat in an Oligarchy will provide hundreds or even thousands times the political strength of a poor laborer. The total Political Strength of all Pops in an Interest Group is what gives it its level of Clout – the amount of political weight it can assert on the country and the government. It’s important to note though that Pops are not unified in which Interest Groups they support – individuals within Pops are the ones who decide their Interest Group, and a single Pop can potentially have individuals supporting every Interest Group in the game (in different numbers).

Some Pops have no political strength at all, usually due to being disenfranchised under the nation’s laws (such as people of a religion or culture that is discriminated against, or women in countries that haven’t instituted women’s suffrage). These Pops are ‘outside the system’ so to speak, unable to demand reform through the regular political system of Interest Groups, and instead having to rely on other methods to put pressure on the government, but we won’t focus on those today.

Individual members of a Pop can support different Interest Groups – or stay out of politics altogether! 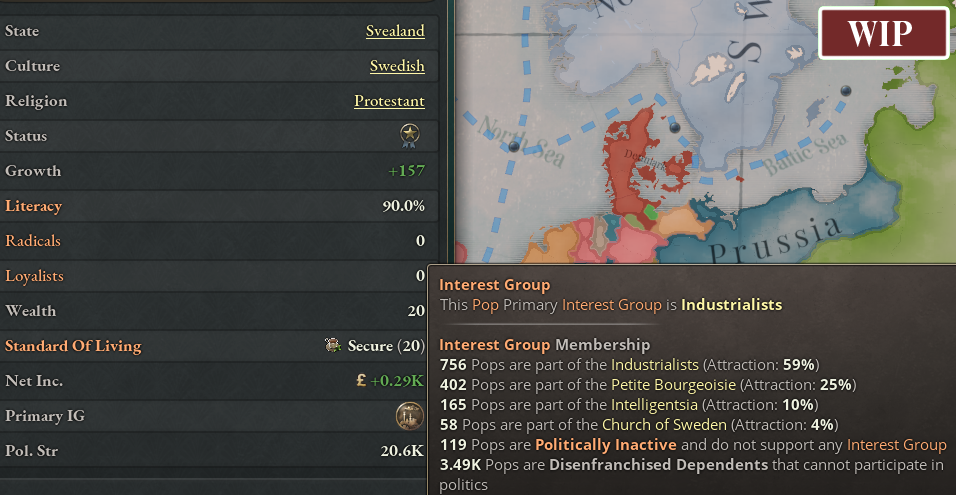 As mentioned above, Interest Groups have a number of ideologies which determine their views on which laws the country should or should not enact. Different Interest Groups will have different ideologies (the Landowners are significantly more conservative than the Trade Unions, for example – shocking, I know!) but these are not entirely set in stone – they can change over the course of the game and will also vary based on the current leader of the Interest Group, who comes with his or her own personal ideology and view of the world. Additionally, some Interest Groups in certain countries have unique ideologies colored by their religion and culture, such as the Confucian Scholars Interest Group in Qing China who (unsurprisingly) espouse a Confucian ideology. 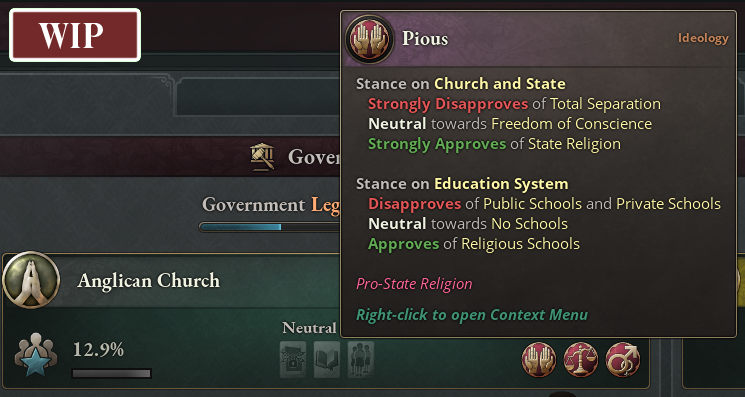 Interest Groups also have a level of Approval, which is based on factors such as how much they approve of the country’s laws, whether they are in government or in opposition, and how many of their individual members are Loyalists or Radicals (more on those in a later dev diary). There are numerous other factors that can affect Approval as well, such as how you react to certain events or decisions that you take.

Traits are, of course, not the only way that Interest Groups can affect a country, and it’s even possible for one (or several!) angry Interest Groups to start a civil war, potentially bringing in foreign countries to support them.

Keep the aristocracy happy, and they’ll be more willing to reinvest their ‘hard-earned’ money into the country 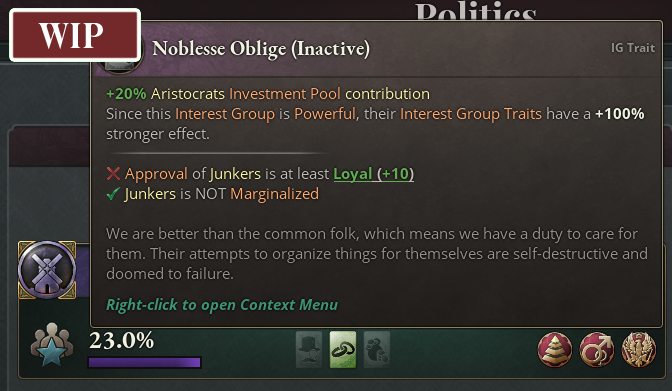 Now, something that’s been a hotly debated topic in the community in regards to Interest Groups is Political Parties and whether they will be a part of Victoria 3 so I want to briefly touch on this. What I can tell you for now is that we are currently looking into a solution where parties can form in certain countries as constellations of Interest Groups holding a shared political platform. This is something that’s by no means fully nailed down at this point though, so don’t take this as a 100% firm commitment to how they would function. What I can tell you for sure is that we will come back to this particular topic later!

That’s all for today, though we’ll certainly be coming back to the subject of Interest Groups and looking at the different types you will encounter in later dev diaries. With July and summer vacations coming up, we’re going to take a short break from Development Diaries, but we’ll be back on July 22nd as Mikael returns to continue talking about politics in Victoria 3, on the subject of Laws.