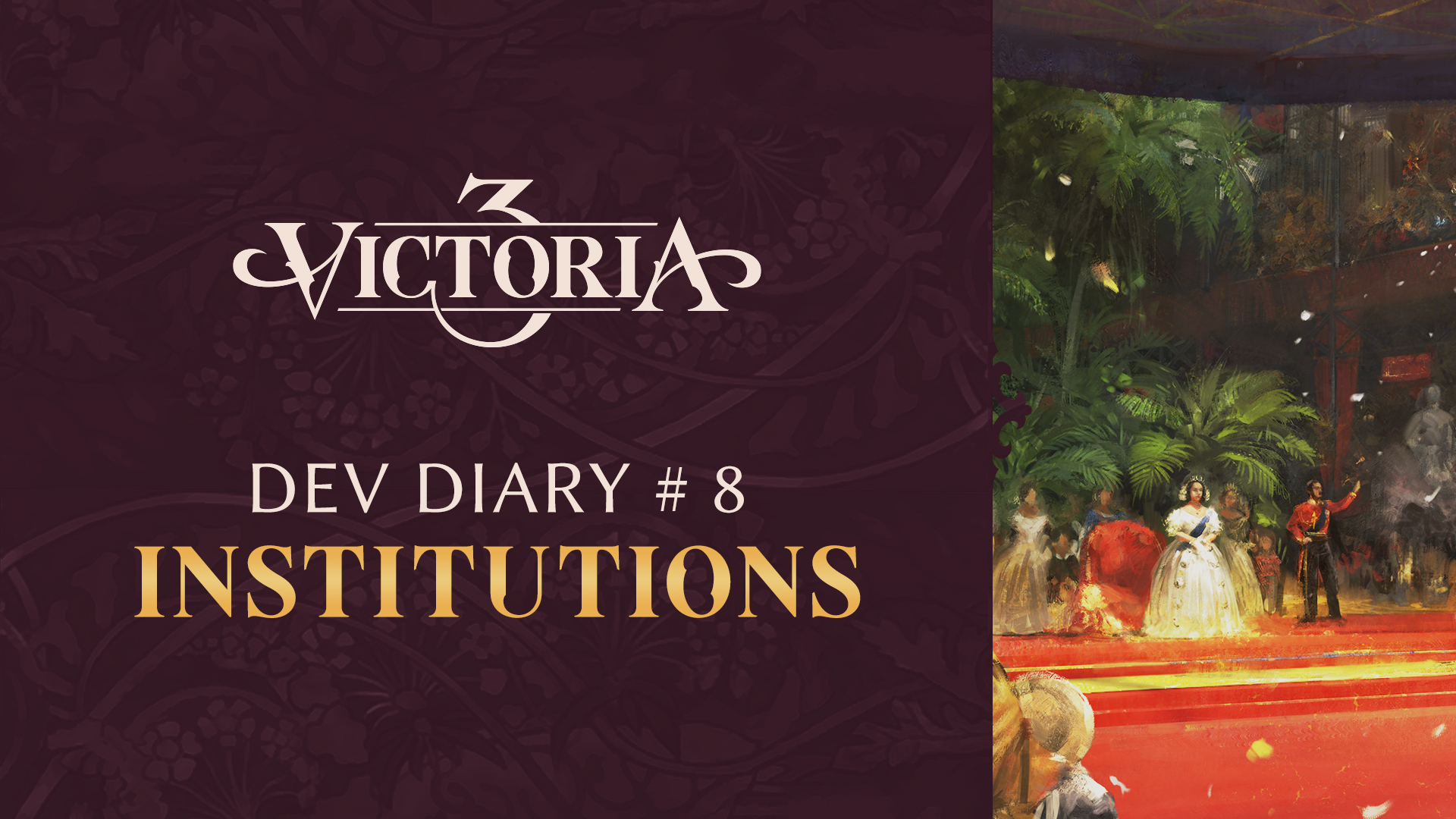 Let’s talk about Government Institutions! These are the “services” your government provides to its Pops – and I use scare quotes here because while that does certainly include things like schools and workplace safety controls, it also means conscription offices, militarized police, and poorhouses.

While Laws are political hot buttons with your Interest Groups, Institutions are a side effect of those Laws, and it’s not as politically fraught to expand your pre-existing health care system as it is to establish or dismantle it. But the Laws that bring an Institution into existence also govern what side effects they have, and Interest Groups will care a lot about those.

As we all know, Institutions run on Bureaucracy like gamers run on caffeine (I would have said “cars run on gas”, but that isn’t universally true anymore, is it?). Bureaucracy comes from Government Administration buildings, which employ Clerks and Bureaucrats that consume Paper (and later on other goods, like Telephones) in the process. The more Government Administration buildings you have, the more and larger Institutions you can operate at once.

Running a positive Bureaucracy balance is great for remaining responsive to your people’s evolving needs. In the meantime, any excess Bureaucracy will be used to marginally improve construction efforts around your country. 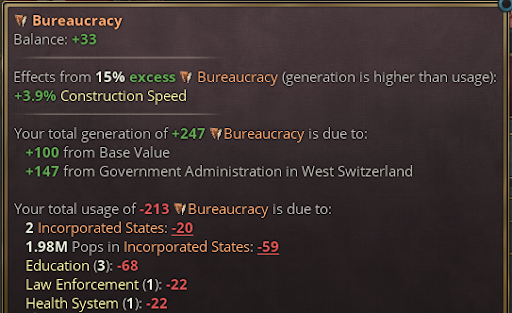 The cost of Institutions, or the cost of one level of an Institution, is dependent on the size of the population across your Incorporated states. An important aspect of Institutions is that the effects and benefits they apply only affect Incorporated parts of your country – if you have any colonial frontiers, contested territory, or recently annexed land you haven’t Incorporated yet, these do not pay taxes to you nor do they cost you Bureaucracy, but they also can’t access your awesome hospitals.

Ways of decreasing the cost of providing Institutions to your people include:

To establish these Institutions you have to have sufficient Bureaucracy for their operation, and then enact an enabling Law. There are always several different Laws that enable a certain Institution, and which you choose will “flavor” the Institution accordingly. For example, the Colonial Affairs Institution will generate colonial growth in all your established colonies in relation to the size of your Incorporated population, by encouraging people to move and invest there. But if you have the Colonial Resettlement Law each level of it will also provide increased colonial migration pull to entice your population to move there, while the Colonial Exploitation Law will increase the throughput of colonial industries while reducing the Standard of Living of Pops who live there.

Switzerland has 3 levels of Religious Schools, 1 level of Local Law Enforcement, and 1 level of a Private Health System with a second level currently in progress. 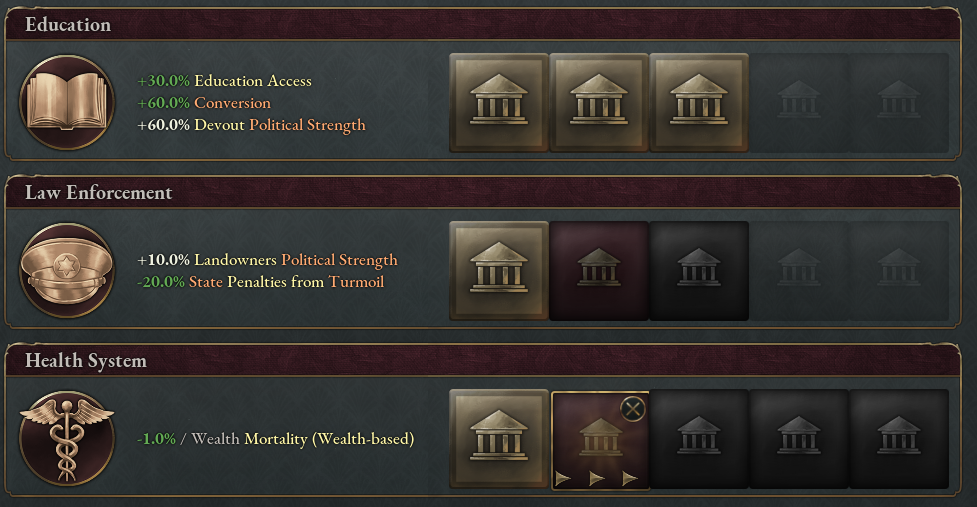 The Bureaucracy you invest into Institutions can be redistributed as needed, but this takes time. For example, if you have a level 3 Health System and level 2 Home Affairs, and a per-level cost of 142 Bureaucracy, you’re paying 710 Bureaucracy for the privilege which you have to generate from Government Administration buildings. But if your population grows such that each level costs 173 instead, maintaining these levels will cost you 865. Assuming this puts you at a deficit of -155 Bureaucracy, you will suffer a pretty hefty Tax Waste penalty, which causes a percentage of all taxes collected to never quite make it all the way to your treasury.

In response to this disaster you may be forced to reduce the level of one of these Institutions, which will restore your Bureaucracy balance to +18 while you expand your bureaucracy to be able to regain the lost level. If you took the level from the Health System, your Pops will suffer reduced health in the interim, while if you reduce Home Affairs, you better hope you have no anarchist bomb-throwers lurking around in the shadows. Since Institutions expand gradually, restoring your lost level will take some time, so if possible it’s best to stay ahead of the change and expand your Government Administration proactively if you experience strong population growth or immigration waves to your incorporated states.

That’s all for Institutions! Until next week!