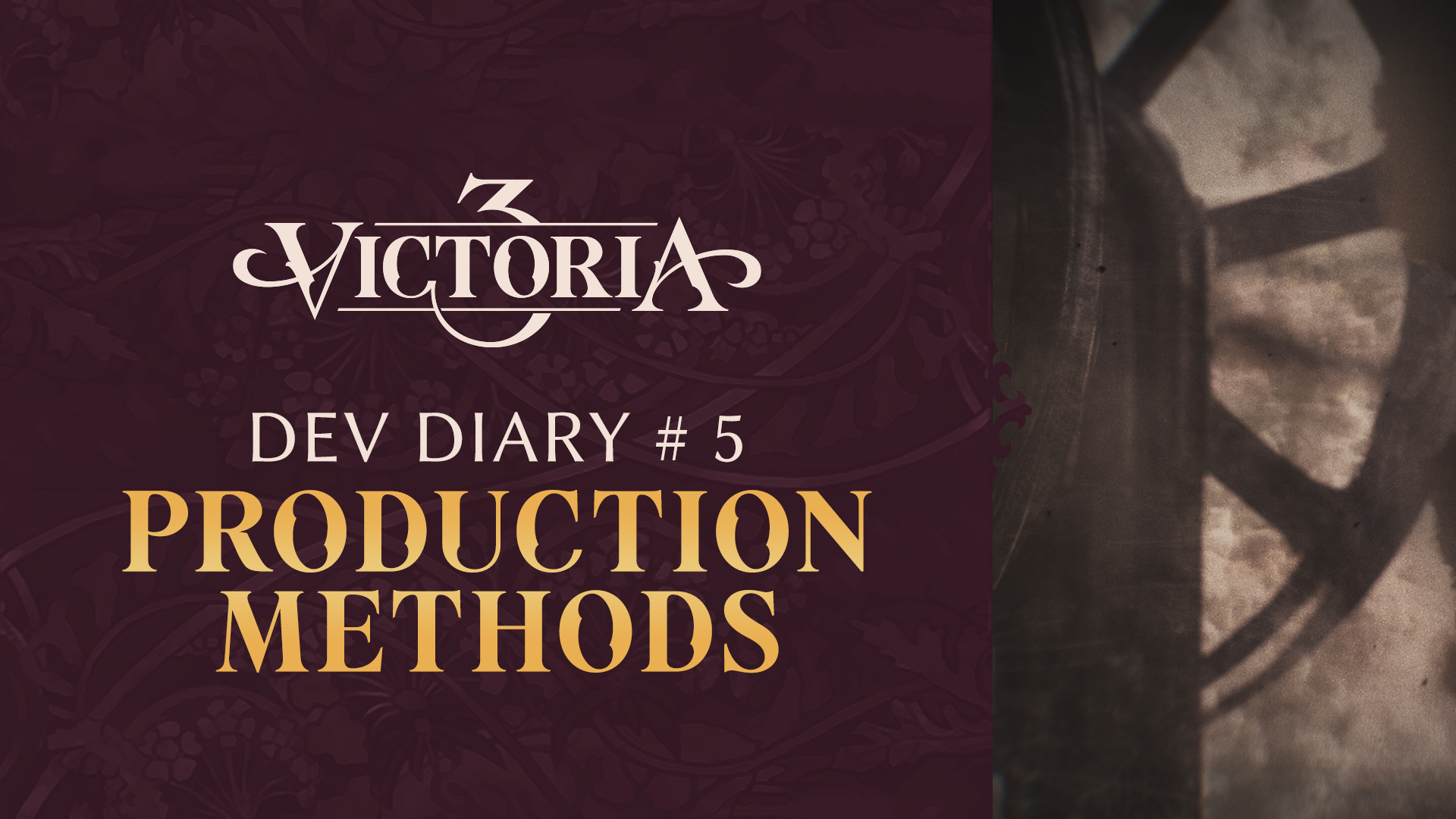 Hello again and happy Thursday! Today we will be taking a deeper look inside Buildings to explore Production Methods. These determine the functions of the building, its inputs and outputs, and what employee types it requires to operate.

Many management games let you upgrade a building to increase its efficiency or expand its functionality. In these games, after the upgrade investment has been paid the impact is permanent and nearly always superior in every way to the building’s previous functionality. But in Victoria 3 there are no actions without reactions, and novel innovations don’t just make buildings better with no side effects. Improving industrial processes over time is to be expected, but in some cases those improvements might require goods as input that the country has scant access to, while others permit the output of a new type of end product at the expense of the old one. As a result, buildings in Victoria 3 require more flexible upgrade paths than what’s afforded by permanent, linear, “no-brainer” improvements.

All buildings have several categories of Production Methods, usually between 2 and 5. Only one is active at any given time in each category. Most categories fall into one of these types:

Base: governs the general “tech level” and efficiency of the building, produces goods typical for the building type.
Refining: reduces output of typical goods in favor of output of specialized or luxury goods, sometimes adding a special input.
Automation: adds industrial goods as input to reduce the building’s unskilled workforce requirement.
Ownership: determines who owns shares in the building; typically governed by Laws. 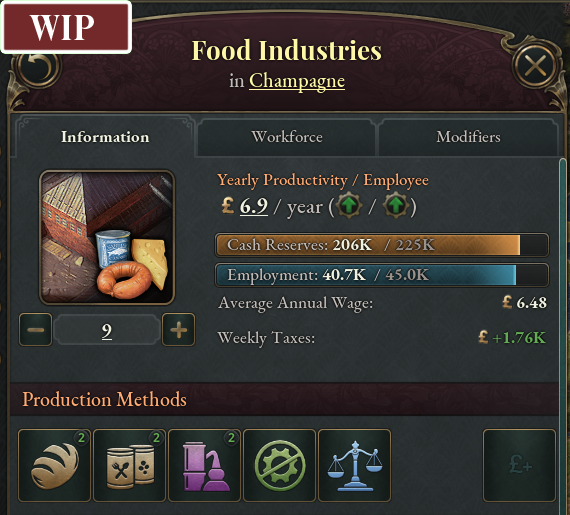 As one example, an Iron Mine’s base Production Method determines if miners use only picks and shovels or if they also use some sort of engine-driven pumping mechanism. There are several different pumping technologies which also determine what fuel is used. The more advanced the pumping mechanism the more deposits can be accessed and the faster Iron can be mined, but the more Coal or Oil is used in the process. With higher tech pumps comes a requirement for more Engineers and Machinists to be on-site to control and oversee its operation. This creates more demand for qualified workers and also opens up a number of better paid positions to those Pops who meet the qualifications.

The revolution in chemical sciences of the era also enabled the use of explosives in mining, which is a secondary Production Method category used only in mines. Once Nitroglycerin is invented, it can be used in mines to generate even more minerals, at the expense of Explosives produced by the Chemical Industry but also with a higher rate of workplace accidents. By researching less volatile Dynamite, even more minerals are extracted at the expense of even more Explosives, with the additional benefit that far fewer workers will blow themselves up on the job.

Once invented, portable Steam Donkey engines can be deployed at mining sites to drastically reduce the amount of manual labor required just for hauling. This costs the building some money in the form of Coal and Engines, but reduces the amount of money they have to pay in wages. Perhaps more importantly it frees those Laborers up to do other work in other buildings if the state is running low on workers. But if wages are already very depressed it might not be a great idea to purchase expensive industrial goods just to increase the unqualified labor pool further, so this might not be a no-brainer decision for a player to make.

In most countries, simple mines are owned and operated by Merchant Guilds at game start. These are small-time purveyors of the goods produced represented by Shopkeepers. Once mines start to industrialize, Capitalists step in to take over ownership. In most cases these Capitalists will come from Shopkeepers promoted to these newly created positions, but some might come from other Pops in the state, even other Capitalists in buildings not quite as lucrative as these new mines. There are fewer Capitalists than Shopkeepers but they draw a higher wage, and more importantly they will reinvest some of their earnings into the country’s expanding industry depending on how much profit their workplace is generating for them. As new ideas spread across your society you might be able to make the mining industry publicly traded instead of privately held, and later on in the game perhaps even nationalize them to be run by government bureaucrats or turn them into cooperatives where profit is split between workers. 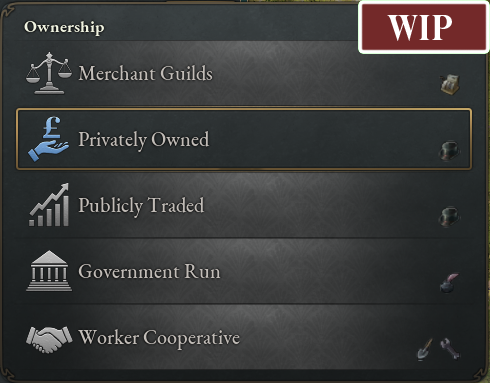 Production Methods aren’t limited to consuming and producing goods. Government Administrations employ Bureaucrats and Clerks who use Paper to produce Bureaucracy, one of the game’s Capacities that let you govern more people and extend more state services to them. Railways consume Engines and a fuel such as Coal to produce both Transportation and Infrastructure, the former which is sold on the market and the latter which allows the state to support more buildings without loss of Market Access. Universities employ Academics that let the state guide research and development of new technologies and ideas. Virtually any kind of currency, modifier, or effect can be produced by Production Methods in buildings and can be applied in a variety of ways to the country, state, or even the building itself.

A basic Government Administration consumes 10 Paper and produces 50 Bureaucracy per fully-staffed level, but each additional level beyond the first adds a +2% Throughput bonus due to economy of scale. This increases both consumption of Paper and output of Bureaucracy, yielding more productivity from each of the Pops that work the building. 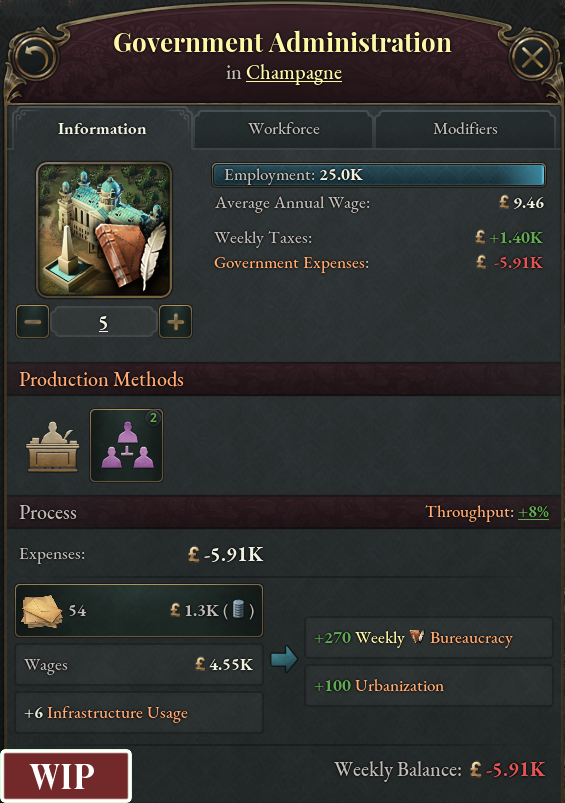 This of course adds a tremendous capacity for modding in new Buildings and Production Methods! Embassies that increase your Influence, but which can also be configured to consume Wine and Meat at state expense to increase the speed at which you Improve Relations? Shantytown Temples that can only be built on coastlines, that consume Fish and create jobs for pops qualifying for the Deep Ones profession, increasing state mortality but also the weekly rate of the global cthulhu_rising counter? We can’t wait to see what madness you unleash!

If tweaking multiple Production Methods across several categories on every single building in the game sounds a bit complex compared to linear building upgrades – you’re right! Thankfully we’ve built a number of tools to help with this process. Foremost among these are the Buildings panel, where you can get an overview of all buildings in your country organized by major and minor type. For example you could get an overview of all Rural buildings, or all Furniture Manufactories, or all Ports. If you have buildings of the same type in several different states, you can break it down further to view the individual building. On each level you can see how profitable the building is and adjust its Production Methods. You can even set all Production Methods for a certain building type to a specific setting all across your country with one click.

From the Buildings panel you can get a birds-eye view of all industries in your country and see at a glance how they’re doing financially. You can change Production Methods on an individual building or on all of them at once. You can even expand buildings directly from this screen if you so choose, or click on one to get an in-depth view of its balance sheet and workforce. 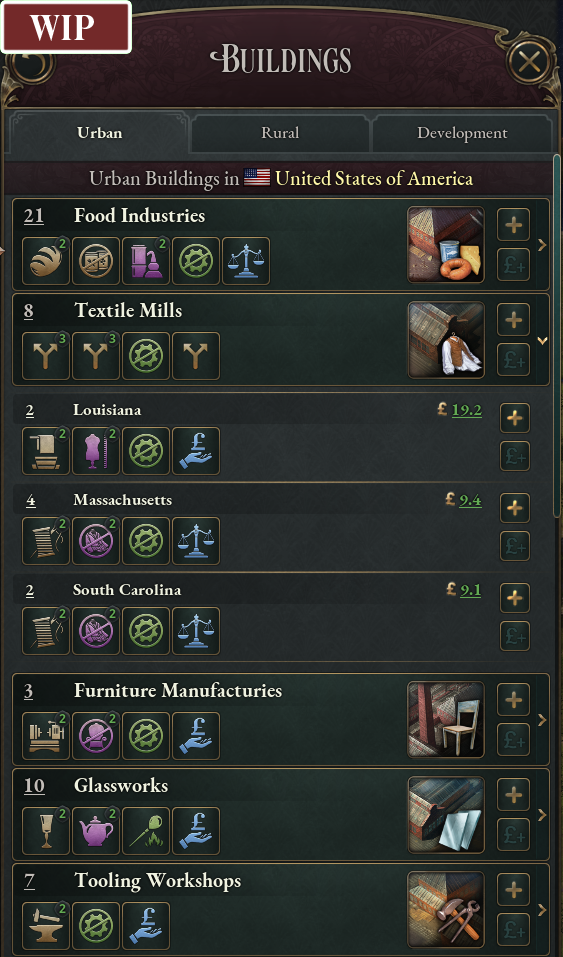 To minimize the requirement for mental math we have also created prediction tools that give you a breakdown of what to expect from choosing a certain Production Method, based on profitability predictions taking adjusted production and consumption into account, and summarizing which new job positions will be created and which will disappear. While it may on the surface seem obvious to just enable the Production Methods that make the buildings more profitable, keep in mind the societal effects as well – are there enough Pops in the state that qualify for the more advanced jobs this new process requires? Will the wage for these new jobs be sufficient to entice those Pops to switch professions? Will you inadvertently create a whole new class of well-to-do Machinists that may have pro-labor union sentiments? Or will the increased profits not lead to higher wages in the building because they’re already competitive and fully employed, and will simply result in more dividends for the shareholders which will be funneled into increased luxury consumption? Which you choose might depend on your population’s social mobility, what politics you favor in your country (a socialist uprising may not be in your plans!) and whether you’re able to supply luxuries yourself without benefiting your rival. More profitable domestic industries are never bad, but should be far from the only consideration when building your society.

Predictive tooltips will explain the anticipated impact on the building’s Balance as a result of changes in production, consumption, and wage requirements, as well as the changes in employment that could also impact the country’s politics over time. You will also be forewarned if there aren’t enough qualifying Pops to take on any new professions created, as this could limit your industry’s effectiveness.

That is all for this week. We will return to discussing more economic intricacies later, but for the next little while we’ll be exploring domestic politics – starting next week when Martin will be presenting Interest Groups!