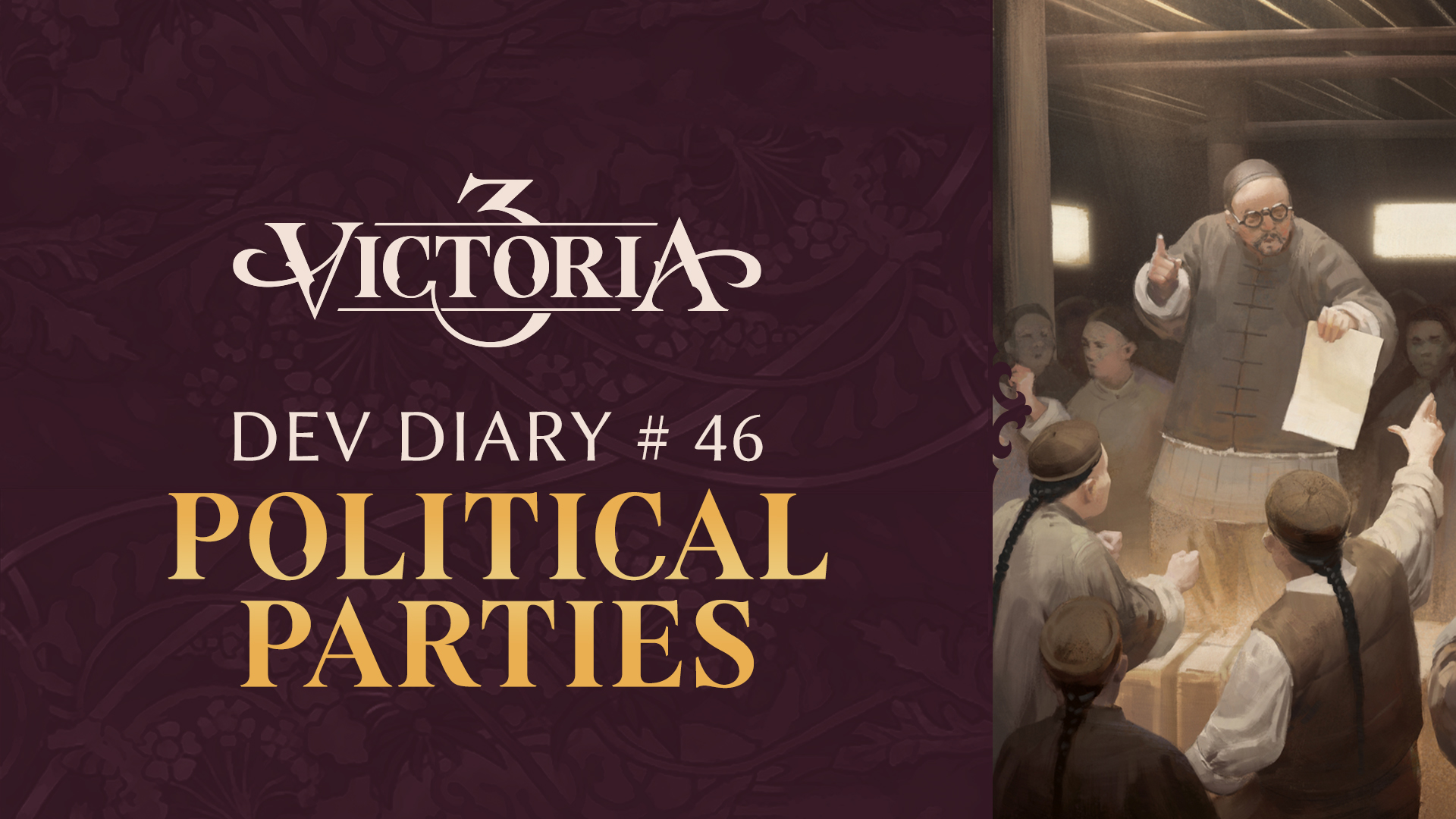 Good evening! Today we are finally ready to talk in detail about Political Parties. This has been a much-requested feature for Victoria 3, and indeed the political world would feel a little empty without the Whigs and Tories going at each other’s throats. We’ve listened, and some months ago we revealed that we were indeed working on implementing this feature. Today we are ready to talk about how Parties will factor into the political landscape of the game.

In Victoria 3, a Political Party is an alliance between Interest Groups. They appear in countries that have Elections, and are absent in countries without them, differentiating the experience and mechanics of democracies from autocracies. Interest Groups must be added or removed from government as a single bloc, which means that you’ll need to make strategic decisions about the makeup of your government and deal with the consequences. The Liberal Party may for instance contain both the Intelligentsia and the Industrialists, who will both back your plans to move toward a free market economy but diverge on the issue of child labor. Sometimes an opposition Interest Group might decide that it wants to join a Party currently in government (or vice versa) – in this circumstance, the Interest Group will leave their old Party and be marked as “wanting to join” their new party. This won’t force any Interest Group into or out of government, but if you decide to reform your government under these circumstances you must treat that Interest Group as being a member of the new Party, bringing them into or out of government as a single bloc.

The Republican Party in the USA is made up of an alliance between the Industrialists and the Intelligentsia, primarily opposing the ruling Democratic Party which is constituted by the Southern Planters and Petite Bourgeoisie.

Just as Parties ally together when you form your government, they also share their Momentum in Elections, which determines their votes. If for instance the fascist leader of the Petite Bourgeoisie joins the Conservative Party and is caught up in a political scandal, the whole Party suffers the electoral consequences. On the other hand, as the Landowners begin to lose their political relevance in an increasingly industrialized economy they might cling to relevance by attaching themselves to the rising Fascist Party, who may bring them Political Power from the votes the whole Party gains in the Election.

The Whig Party, consisting of a large number of opposition IG’s, has landed themselves in a corruption scandal. Rowland Hill, leader of the Armed Forces and prominent Reformer, may have seriously harmed the entire bloc’s election campaign. 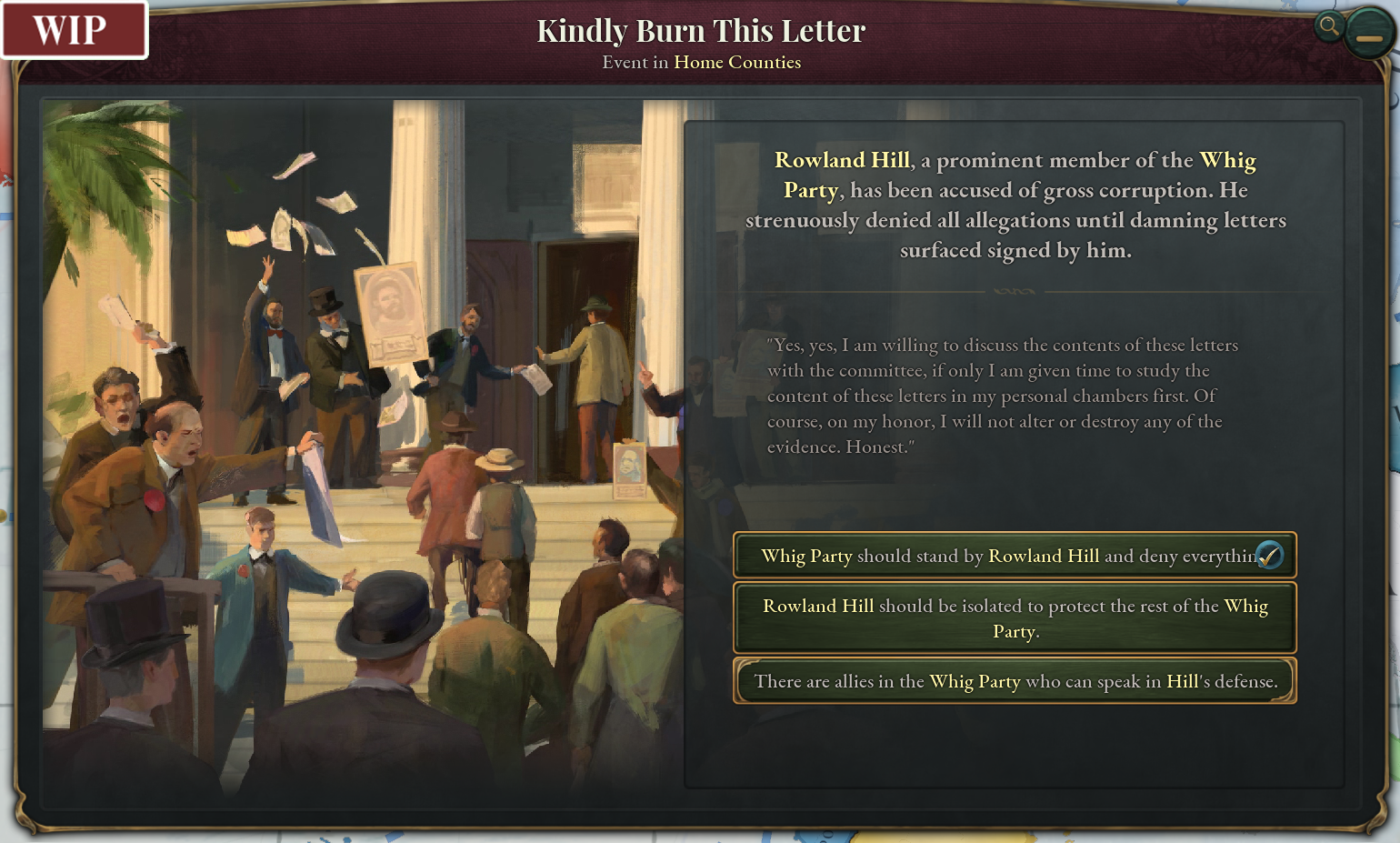 During the Election Campaign period (which as you’ll recall lasts 6 months before the final votes are cast), you’re likely to get events relating to the various Party’s campaign efforts that can have a major impact on Momentum. These events are inspired by the campaigns and scandals of the period, such as Gladstone’s Midlothian campaign and the whistle-stop tours that became popular in the USA.

There are 11 potential Political Parties that your Interest Groups can join. At any given time, any combination of these parties might exist or not exist. Parties emerge and disband dynamically, so the political landscape can be very different between countries and playthroughs. The following Parties can emerge throughout the course of the game:

Many of these parties are aligned primarily around a particular Interest Group’s core ideologies, which other IG’s may join under the right circumstances. The Liberal Party for instance is the natural home of the Intelligentsia due to their Liberal Ideology, but they may be swayed towards other Parties under various circumstances. Other Parties are aligned more strongly with Leader Ideologies that emerge throughout the game, such as the Communist Party and the Radical Party. Each of these Parties has a variety of dynamic names based on national, cultural, and religious factors – for instance in Great Britain the Conservative Party is localized as the Tories, while in the USA they are known as the Democratic Party.

To summarize: in Victoria 3, Interest Groups band together into Political Parties for the purposes of elections and forming governments. There are many dynamic names and conditions that work to create plausible and flavourful Parties no matter which direction you choose to guide your country.

That’s all for today! Join us next week when Mikael will talk about the mechanics behind Religious Conversion and Cultural Assimilation.