Hello again everyone! It’s Thursday again, and that means that it’s time to talk about Buildings. Buildings are a core mechanic of Victoria 3, as it is where the Pops work to produce resources such as Goods. Buildings represent a wide range of industries, businesses and government functions, from humble subsistence farms to complex motor industries and sprawling financial districts. In this dev diary, we’re going to broadly cover the main types of buildings and their function in Victoria 3.

To talk about buildings though, I first have to mention states! States are a concept that should be generally familiar to anyone who’s played some of our other games such as Victoria II or Hearts of Iron IV – a geographic unit of varying size in which much of Victoria 3’s gameplay takes place. States are where Pops live and (more importantly for our subject matter) where Buildings are located and built.

The State of Götaland in Sweden 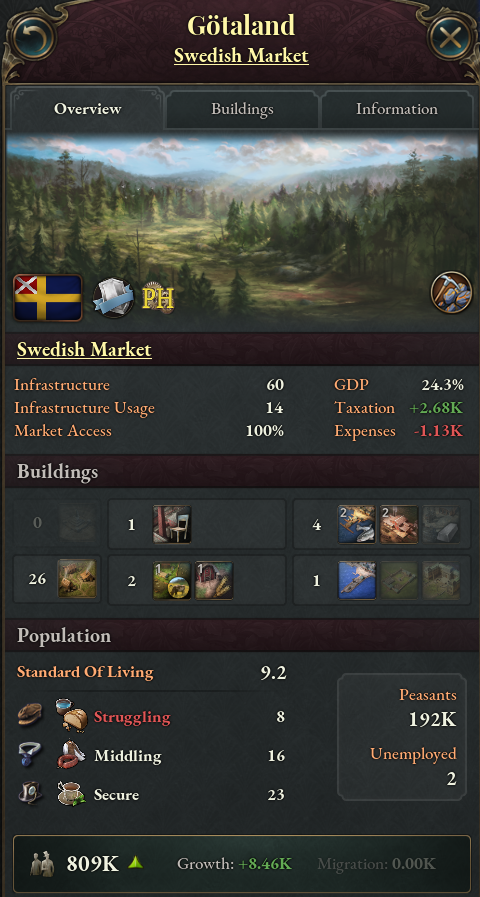 We will return to states more in later dev diaries, but for now let’s keep talking about Buildings!

Before we start on Buildings, something that’s important to note is that Buildings are just places where Pops can work and generally do not represent a single building – a single level of Government Administration, for example, represents the necessary buildings and infrastructure to support a certain number of Bureaucrats. Buildings always need qualified pops to work in them to yield any benefit, and an empty building is just that – empty and completely useless. This holds true even for buildings like Railroads and Ports that did not need Pops to work in them in Victoria 2.

Most buildings are directly constructed, but some (like the Subsistence Buildings below) will appear automatically based on certain conditions. When Buildings are constructed, the construction uses Pop labor and goods, and the costs involved will be subject to market forces.

But onto the different building types! First out, we have Subsistence Buildings. These are a special type of highly inefficient Buildings that cannot manually be built or destroyed, but rather will appear anywhere in the world where there is Arable Land that isn’t being used for another type of building. The vast majority of the world’s population starts the game ‘working’ in subsistence buildings as Peasants, and much of the game’s industrialization process is about finding more productive employment for your Peasants.

Peasants eke out a meager living in these Subsistence Farms, contributing little to GDP and taxes per capita 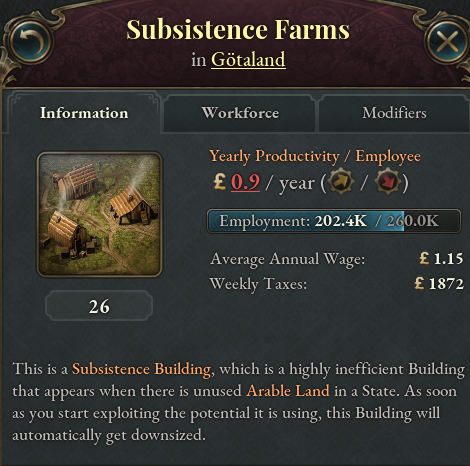 Another special type of building is Urban Centers. Like Subsistence Buildings, these are automatically created rather than built, with the level of Urban Center in a State being tied to the amount of Urbanization generated by its other buildings. Urban Centers primarily employ Shopkeepers and provide a number of important local functions that we will get into at a later point. 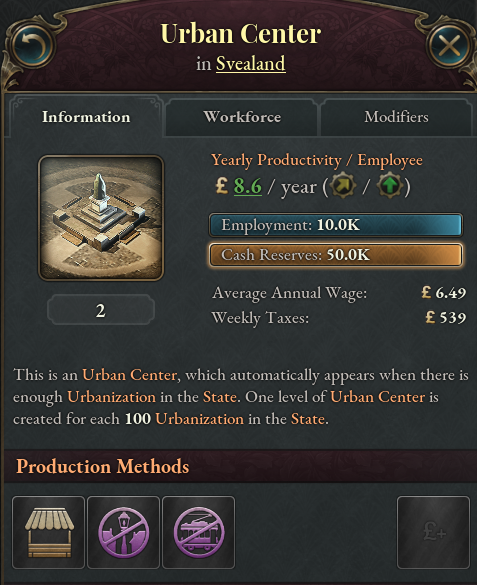 Next up we have Government Buildings. These are buildings that are fully funded by the state (ie, you!) and provide crucial civil services required for the smooth running of a Victorian nation. Examples include Government Administrations where Bureaucrats produce Bureaucracy for the administration of incorporated states and funding of Institutions, and Universities where Academics produce Innovation for technological progression. 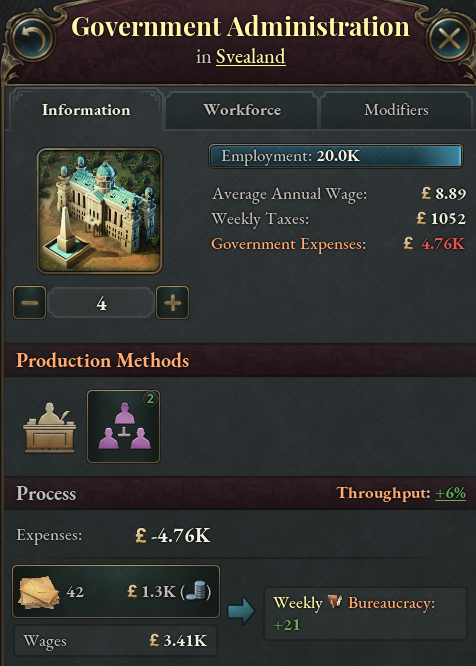 The counterpart to Government Buildings is Private Industries. The vast majority of Buildings in Victoria 3 fall under this category, which includes a broad range of industries such as (non-subsistence!) farms, plantations, mines and factories. Unlike Government Buildings, Private Industries are not owned by the state but rather by Pops such as Capitalists and Aristocrats, who reap the profits they bring in and pay wages to the other Pops working there (usually at least – under certain economic systems the ownership of buildings may be radically different!).

Many of these buildings are limited by locally available resources such as Arable Land for agriculture and simply how much iron is available in the state for Iron Mines. Urban Buildings such as Factories however, are only limited by how many people you can cram into the state, simulating the more densely populated nature of cities. In short, there is no system of building ‘slots’ or anything like that, as we want limitations on buildings to function in a sensible and realistic way.

Several different types of Private Industries are shown below 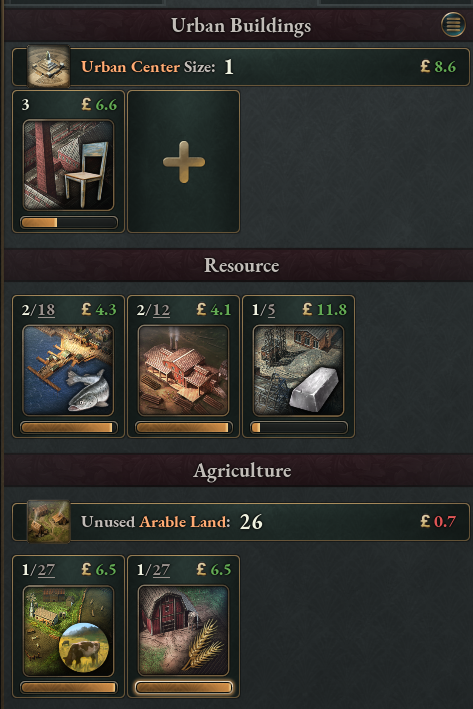 Finally there are Development Buildings. These are often (but not always!) government buildings that distinguish themselves by providing vital state-level functions. A couple examples are Barracks that recruit and train soldiers from the local population and Railways that provide the Infrastructure other buildings need to bring their goods to the Market.

From left to right: Barracks, Port, Naval Bases and Railway

To finish up this dev diary I just want to mention that building up your country is meant to be more of a hands-on experience in Victoria 3, as this is absolutely core to the society-building aspect of the game and forms a major part of the game’s core loop. This naturally also means that we need to give the player the necessary tools to manage their buildings in a large empire, which will likely involve some form of autonomous building construction, though we haven’t yet nailed down exactly what form that will take (and whether it will involve more direct decision making on the part of the investor class). Ultimately though, we want the player, not the AI to be the one primarily in charge of the development of their own country.

Well, there you have it. There is of course a lot in here (such as Production Methods) that will receive further explanation in the many more dev diaries we have planned, so be sure to tune in next week as I talk about Goods. See you then!