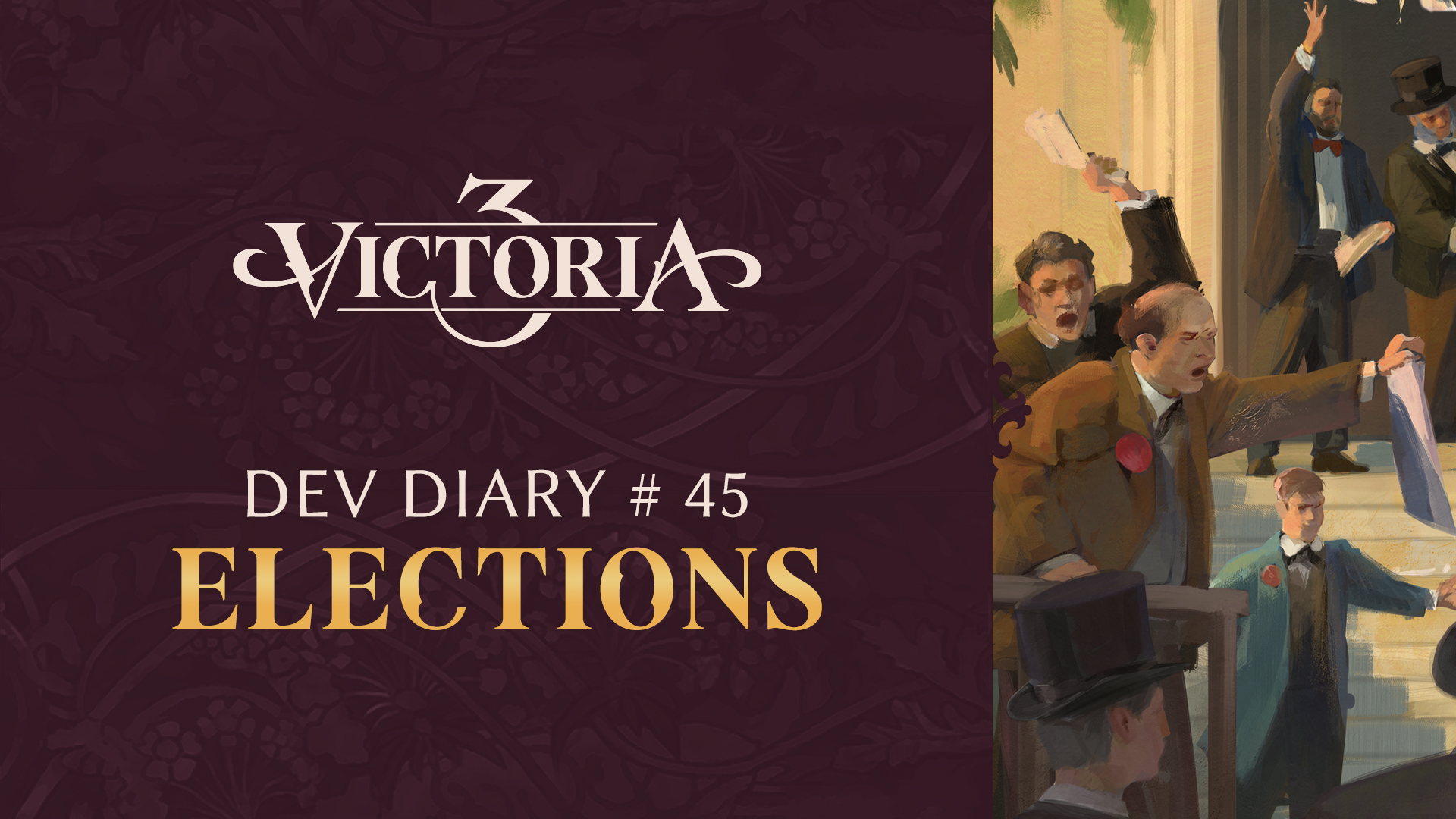 Good evening and welcome once again to a Victoria 3 Development Diary! Today’s topic is elections. We’ll be covering the various laws that enable and affect voting, as well as the progression of Election Campaigns and how they affect political power in your country. We’ll briefly be mentioning Political Parties in this dev diary, but they’re not the focus of this week – more on that next time! For now, I’ll just say that Political Parties in Victoria 3 exist in democracies and are made up of alliances of Interest Groups.

A country has Elections if it has any of the Distribution of Power laws that enable voting:

Under the Wealth Voting Law, political power is held by the pops (and their Interest Groups) who can accumulate the most wealth, and largely denied entirely to the destitute. This naturally favors Aristocrats and the Landowners in more agricultural economies, while favoring Capitalists and the Industrialists in more industrialized economies.

All of these laws are compatible with any of the Governance Principles laws. A country with the Monarchy law for instance could be an absolute monarchy with no voting system at all, or it could have Universal Suffrage – likewise a Republic might very well be a presidential dictatorship. If you are so inclined, you could even create a Council Republic or Theocracy that uses Wealth Voting (though it would be bound to create some political conflict, to put it lightly).

There are three factors that, when applicable, will prevent pops from voting entirely:

In 1913, suffragette Emily Davison was killed by the king’s horse during a race. A passionate believer in her cause, she had been arrested repeatedly by the British government and force-fed while on hunger strikes. 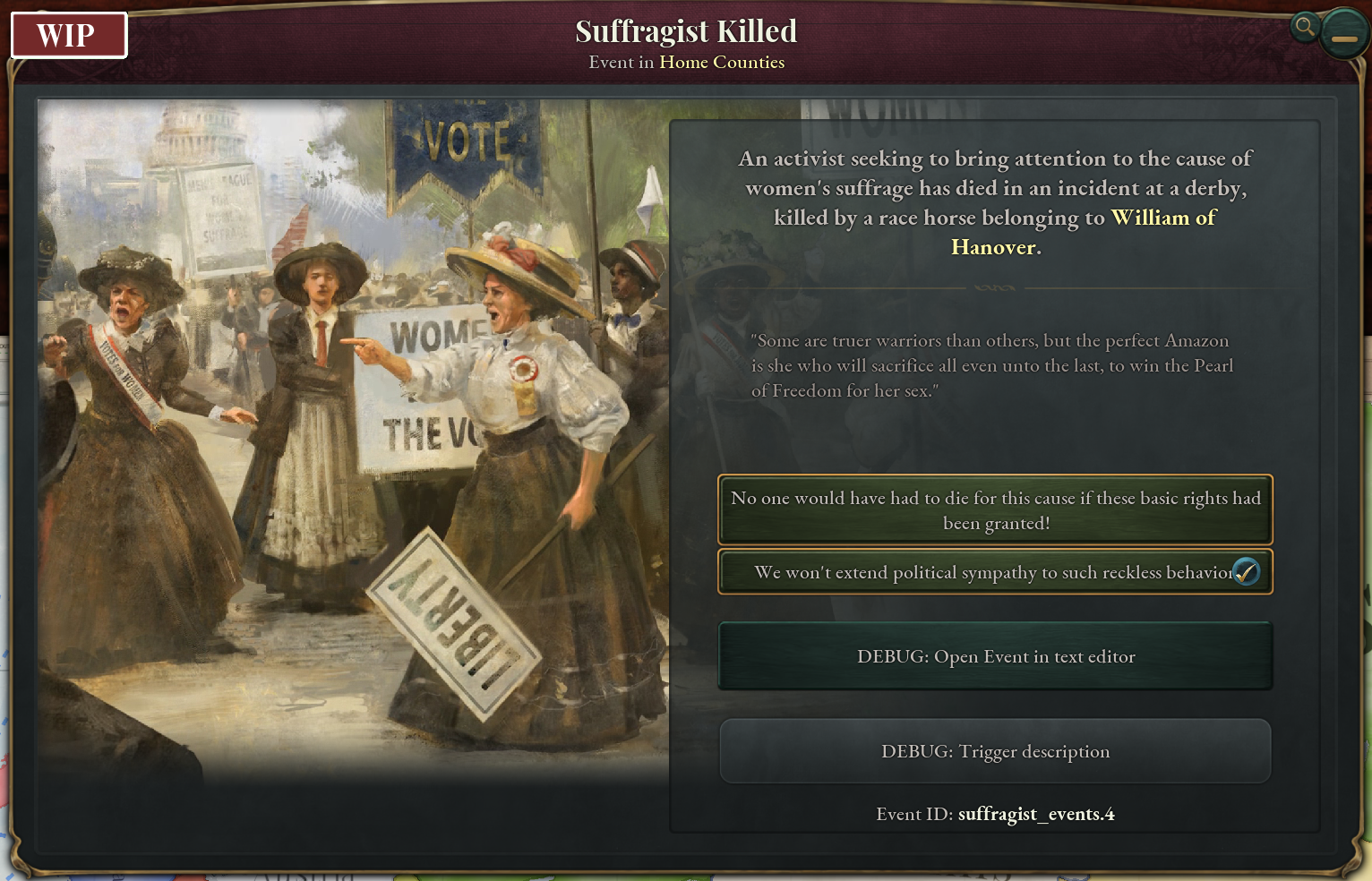 This is a good opportunity to talk about the women’s suffrage movement. In Victoria 3, passing the Women’s Suffrage Law will greatly increase both your Workforce Ratio and your Dependent Enfranchisement. This means that a greater proportion of pops will be eligible to work in Buildings, and a much greater proportion of Dependents will now count towards the voting power of their pop. There will be very little support among Interest Groups to pass this Law in 1836 however. After researching Feminism (or having the technology spread to your country), politicians will begin to appear with the Feminist ideology, which causes them to strongly approve of Women’s Suffrage and disapprove of less egalitarian laws. Once you research Political Agitation, the suffrage movement will begin in full force. The ‘Votes for Women’ Journal Entry will appear, and events will trigger from it that will give you the opportunity to grow or suppress the Political Movement. You can complete the Journal Entry by passing the Law and having your first Election Campaign with women eligible to vote; alternatively you can ignore or suppress the movement until it loses its momentum and withers away.

Why, you ask, would you want to suppress the suffrage movement? If you’re striving for an egalitarian society you certainly wouldn’t. But if instead you’re trying to preserve the aristocracy and maintain a conservative nation then not only will your ruling Interest Groups strongly disapprove of Women’s Suffrage but it will also be very harmful to their political power. Greater Dependent Enfranchisement inherently benefits larger pops more than smaller pops (especially under more egalitarian Laws like Universal Suffrage where wealth counts for less), and it is inevitable that there are vastly more Laborers, Machinists, and Farmers than there ever will be Aristocrats or Capitalists. Pops may begin to wonder why the Lower Strata, the largest class, does not simply eat the other two.

The Whigs took a catastrophic hit in the polls after I repeatedly fired a negative election event to test the system. 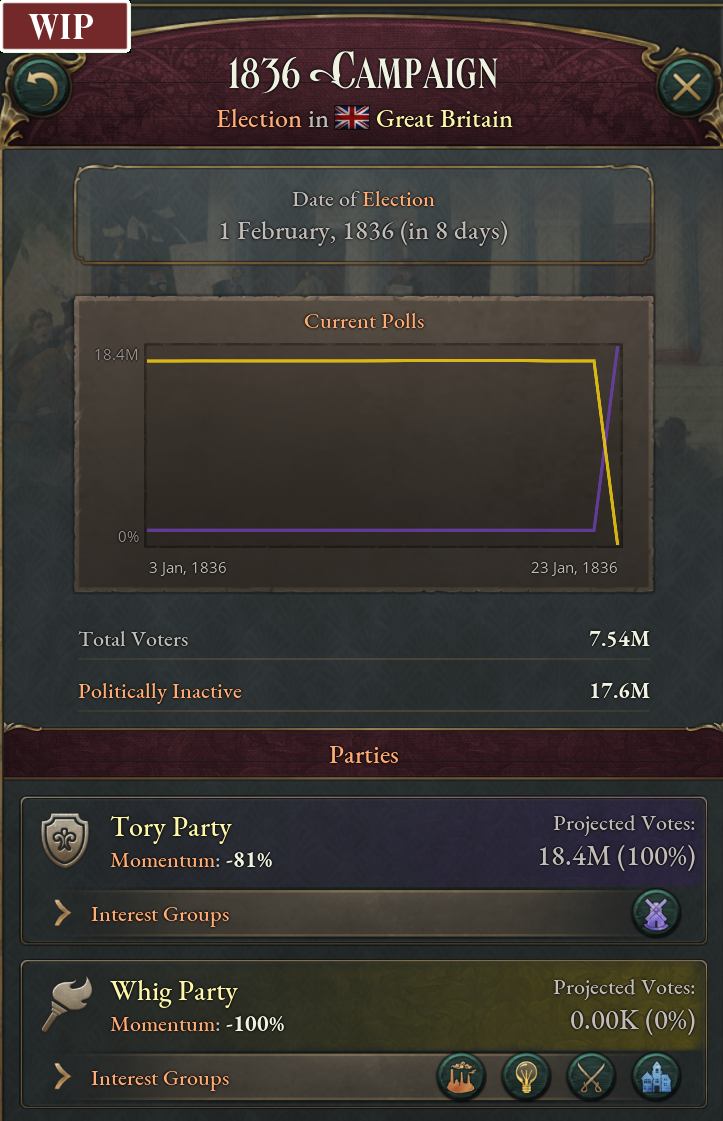 Elections happen every 4 years in countries with voting laws. An Election Campaign begins 6 months prior to a country’s Election date. Each Political Party is assigned a Momentum value at the beginning of the Campaign, which is a measure of the success of their campaign and is a major factor in determining how many Votes they will garner on election day. During this campaign, Momentum will fluctuate for each of the running Political Parties and impact the final result. Since Parties, Leaders, and many other aspects of the political scene in your country are likely to have changed in the years since the previous election, the Momentum from previous elections does not carry over and is reset. Momentum can be affected by chance, events, and the Popularity of Interest Group Leaders.

The Tories’ success in the last election empowered the Landed Gentry, though the sheer wealth of their aristocratic supporters is still the largest contributor to their Political Strength under Great Britain’s Wealth Voting law. 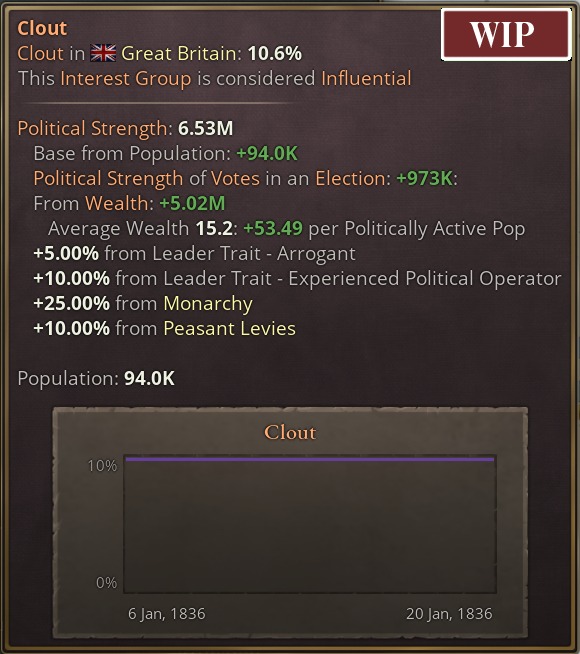 When the Election Campaign ends, the votes are in and the results are set in place until the next election. Interest Groups receive additional Political Strength from their party’s Votes, which will be a major factor determining your Legitimacy and therefore the effectiveness of your government. The actual makeup of your government is still up to you; just like the electoral systems of most modern countries, winning the popular vote does not automatically mean that a certain party or coalition of parties gets to form a government. But the post-election strength of your Interest Groups and their Party affiliations should be a major consideration, especially if you’re forming a minority government.

In Victoria 3, Elections can be a powerful force for political change but also a source of volatility. Dealing with (and if you’re so inclined, manipulating) Election results will be a major consideration when you form your governments. In this dev diary I’ve mentioned Political Parties, and we know you’re eager to hear more about them since the last time we communicated on the topic. You’ll be pleased to discover that in next week’s dev diary we’ll be covering our design for Political Parties in more detail, so watch this space!