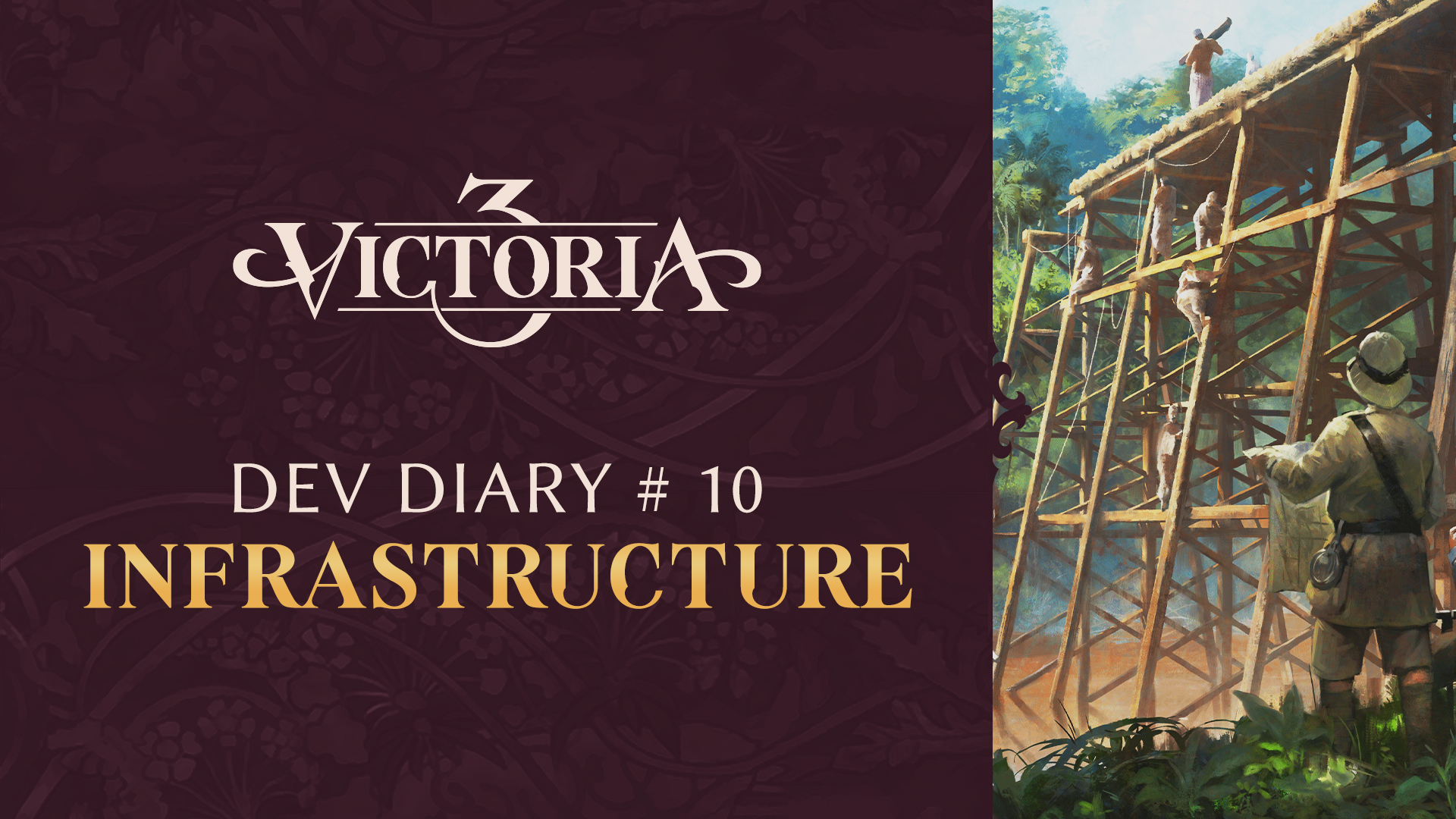 Hello again and happy Thursday! Today we’re going to follow up on last week’s dev diary about Markets, which touched on Infrastructure but did not explain how it works. Infrastructure is an important mechanic for the economic simulation of the game, simulating the cost of moving goods over land and creating the necessary, well, infrastructure to support wide-scale industrialization.

For example, if a state has an Infrastructure of 45 with a usage of 90, its Market Access will only be 50%. Market Access and its effects is something we’ve already covered in the previous development diary, but to briefly go over it again, a low Market Access means that a State is unable to fully integrate its local market into the National Market, which can lead to adverse price conditions from local over- or undersupply of goods.

Minsk has somewhat overextended their local Infrastructure, but with a large population and mostly staple production both their industries and consumers will probably be fine until the railway arrives. 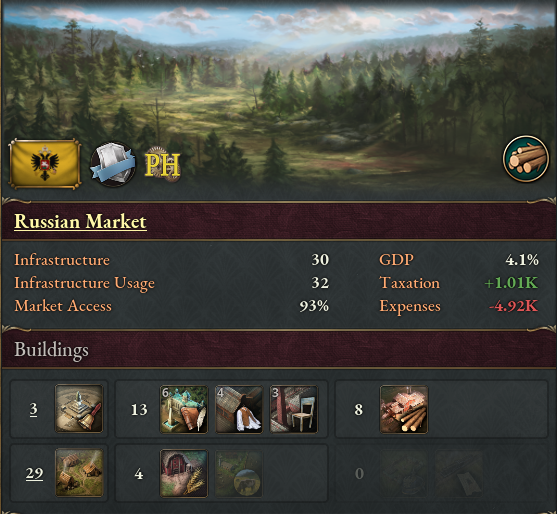 If your consumption matches your local production, as is often the case in rural states where the production consists of staple goods your people require, this isn’t such a big problem! You could perhaps even build some simple Textile Mills and Livestock Ranches in the same underdeveloped state to provide cheap wool clothing if the local population is large enough to demand it in sufficient quantity. But if you’re looking to manufacture more complex goods (or use more demanding Production Methods) you need goods you might only be able to source from another state in your market, or which you can only import from a foreign nation. These goods in turn might be lucrative but only if there are buyers for them – buyers who can actually afford them. Your schemes to get rich off Luxury Clothes and Porcelain won’t work if you can’t reach all the far-flung wealthy Pops of your empire. 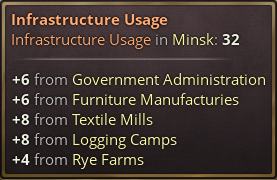 Infrastructure is provided and modified by numerous sources. Just about all States in the game have at least a little bit of Infrastructure based on the technology level of the country that owns it and its state of incorporation (colonies have lower infrastructure than incorporated states, for example). However, over the course of the game, the most crucial aspect of your Infrastructure is the size of your Railway network. As we’ve previously mentioned, Railways is a Building that produces Transportation, an intangible good sold to Pops, but they are also your main source of Infrastructure.

This means that if you want to industrialize a State, it isn’t enough to simply build those industries there and have the Pops available to work in them, you also need to ensure that said industries have enough infrastructure to support them. This of course has a variety of costs involved in that infrastructure-providing Railways need both Pops to work them and access to goods like Coal and Engines. There are alternatives that can be used in the short-term, such as using your Authority on a Road Maintenance decree to ensure the populace don’t allow the roads to fall into disrepair or become unsafe, but such options will never be sufficient in themselves for large-scale industrialization. Of course, Railways also grow more efficient over the course of the game with such inventions as Diesel trains and Electricity, requiring less levels of rail to support a certain number of Buildings.

This early Railway has rapidly become one of Minsk’s best employers, at least for Pops with the qualifications to become Machinists. Unfortunately few people do, so the Infrastructure production is not currently as high as it might be if the railway was fully staffed. Ticket prices, however, are sky high. 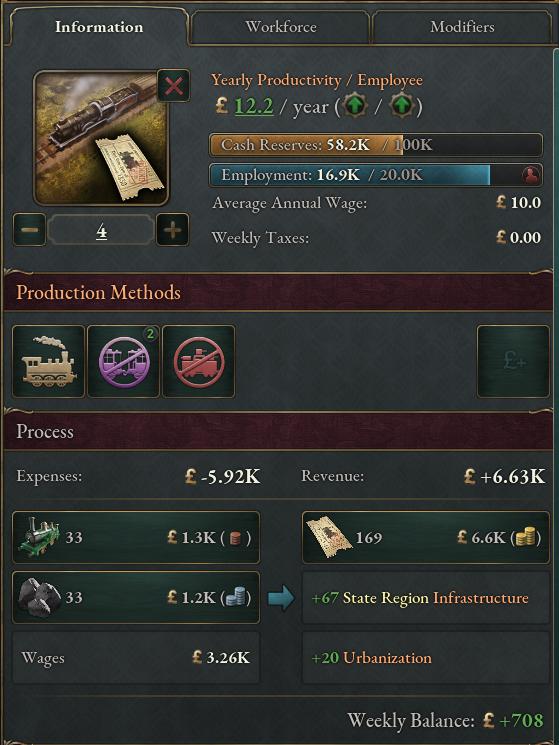 Our intention for railways is that they must be able to find their way back to the market capital, or an exit port destined for the market capital, in order to be useful. In effect this means that any railway can only provide infrastructure up to the amount of infrastructure provided by the best adjacent railway that connects it to the market capital. If you want good access to the Sulfur Mines in Aginskoye for your Munition Plants in St. Petersburg, you best get started on that Trans-Siberian Railway sooner rather than later, because it will take a good long while to build.

Geography, of course, also plays a significant role in other ways when it comes to Infrastructure, and this is represented in Victoria 3 through State Traits. State Traits are bonuses and/or maluses given to a particular State representing particular geographical features, climate and so on. State Traits have a variety of effects, but the most common ones are to either affect the production of a particular resource (for example, if a State contains high quality coal this may be represented through a State Trait that makes coal mines in the state more efficient) or, more significantly for the topic on hand, to provide or modify Infrastructure.

The high-yield Russian Forests are of great benefit to the Logging Industry in Minsk, as long as there’s enough infrastructure available to ship the wood off to all the Russian factories and construction sites that demand it.

States with significant rivers get a large boost to Infrastructure, making them excellent candidates for early industrialization 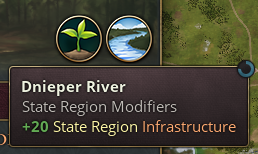 Before we finish up for today, I also just want to mention that Infrastructure does tie into a number of mechanics besides Market Access, such as military logistics and migration, and that Infrastructure is only meant to simulate the cost of transporting goods on land – where the sea is concerned, there are other systems at play… but all of those are topics for another day, so for now I bid farewell and encourage you all to tune back in next week as Mikael returns with another economy-related dev diary about Employment and Qualifications.