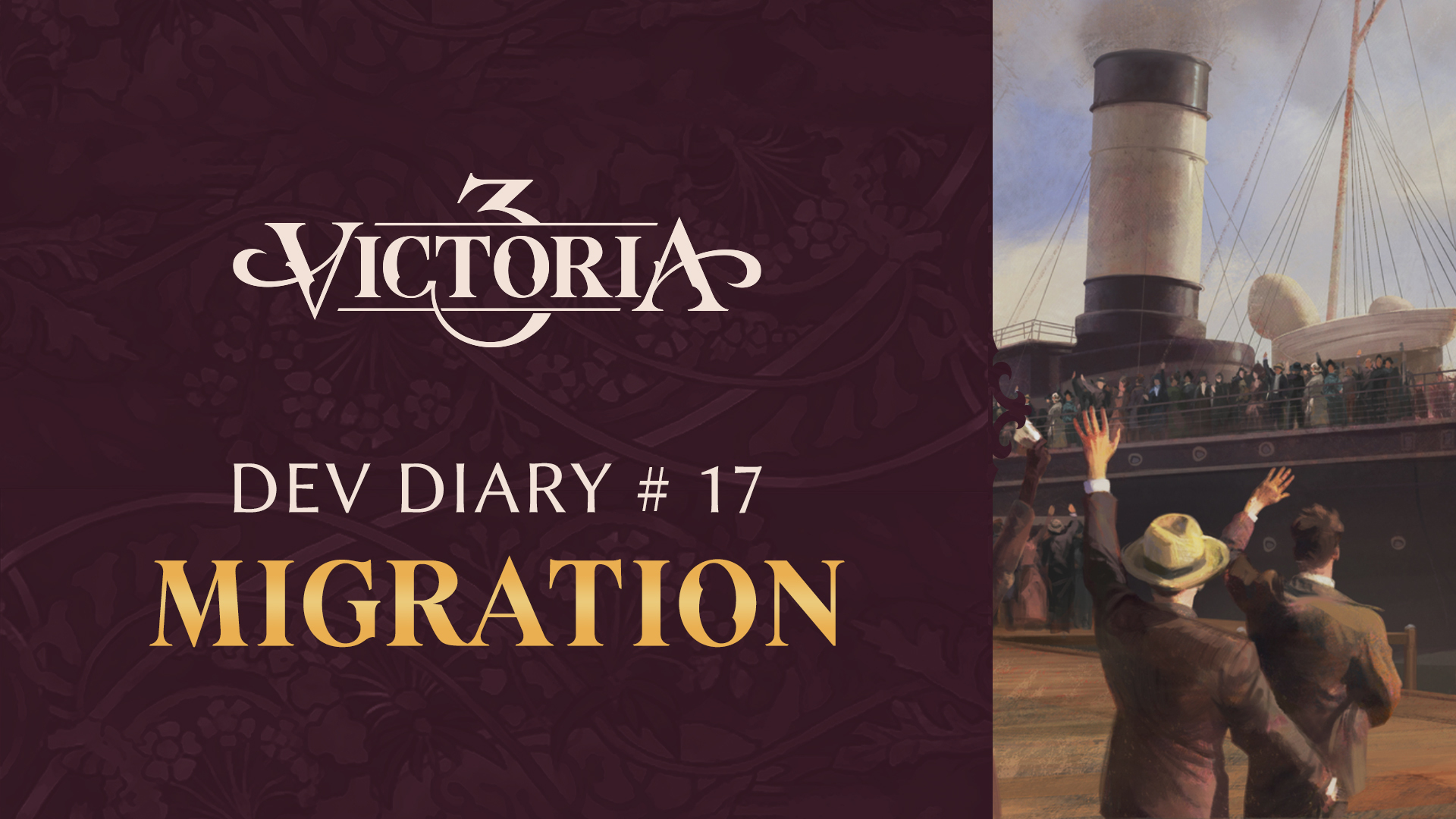 Intra-Market Migration is the movement of Pops between two States that are part of the same Market. Barring certain exceptions (such as slaves not being able to migrate, as covered in the previous dev diary), Pops are generally always able to move between States in the Market, though the number of individuals that are able to change their homes on a weekly basis varies based on factors such as the local Infrastructure and Market Access in the two States.

Which Pops migrate from and to what States depends on the Migration Attraction of each State. Migration Attraction is a value that is based on the average Standard of Living in the state, and modified by various factors such as over/underpopulation, unemployment/available jobs and so on. It is possible for a country to directly encourage Migration to a specific state through the ‘Greener Grass Campaign’ Decree, at the cost of some Authority. In general, Pops will move from States with a low standard of living and a lack of employment opportunities to states with a high standard of living and jobs to offer. States with a low population compared to the amount of available land are especially attractive to economic immigrants.

Kansas, already an attractive state for American settlers due to its sparse population, has been further prioritized for migration through the use of a Greener Grass Campaign decree 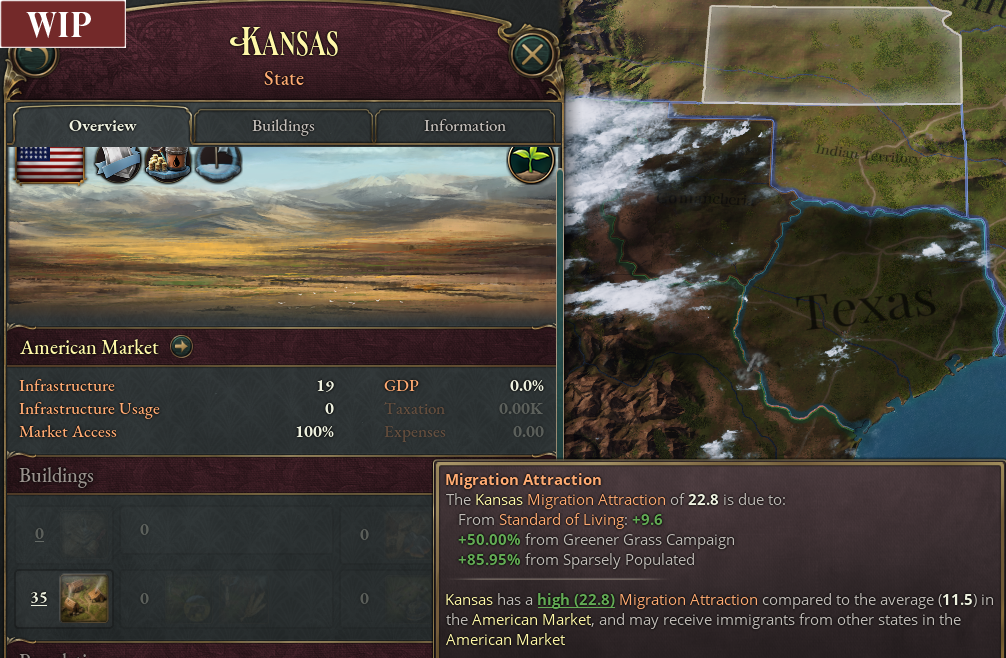 Discrimination, too, plays a role in migration. Pops that are being discriminated against in a particular State, and have the opportunity to migrate to another State in that market where they would not be discriminated against (perhaps because of multiple countries sharing the same Market, and one of those countries having more liberal citizenship or religious laws) will take that opportunity in greater numbers, provided of course that there is an underlying economic reason for them to want to move there in the first place. After all, while enjoying voting rights is certainly nice, putting food on the table is higher on the agenda for most Pops.

Discrimination can also have the opposite effect: Pops that are already enjoying full citizen rights are generally going to need to be in pretty dire economic straits to consider moving somewhere where those rights are going to be taken away, and in the case of a Pop that is going to be discriminated against no matter where they go in the Market, they tend to stick to their cultural Homelands. 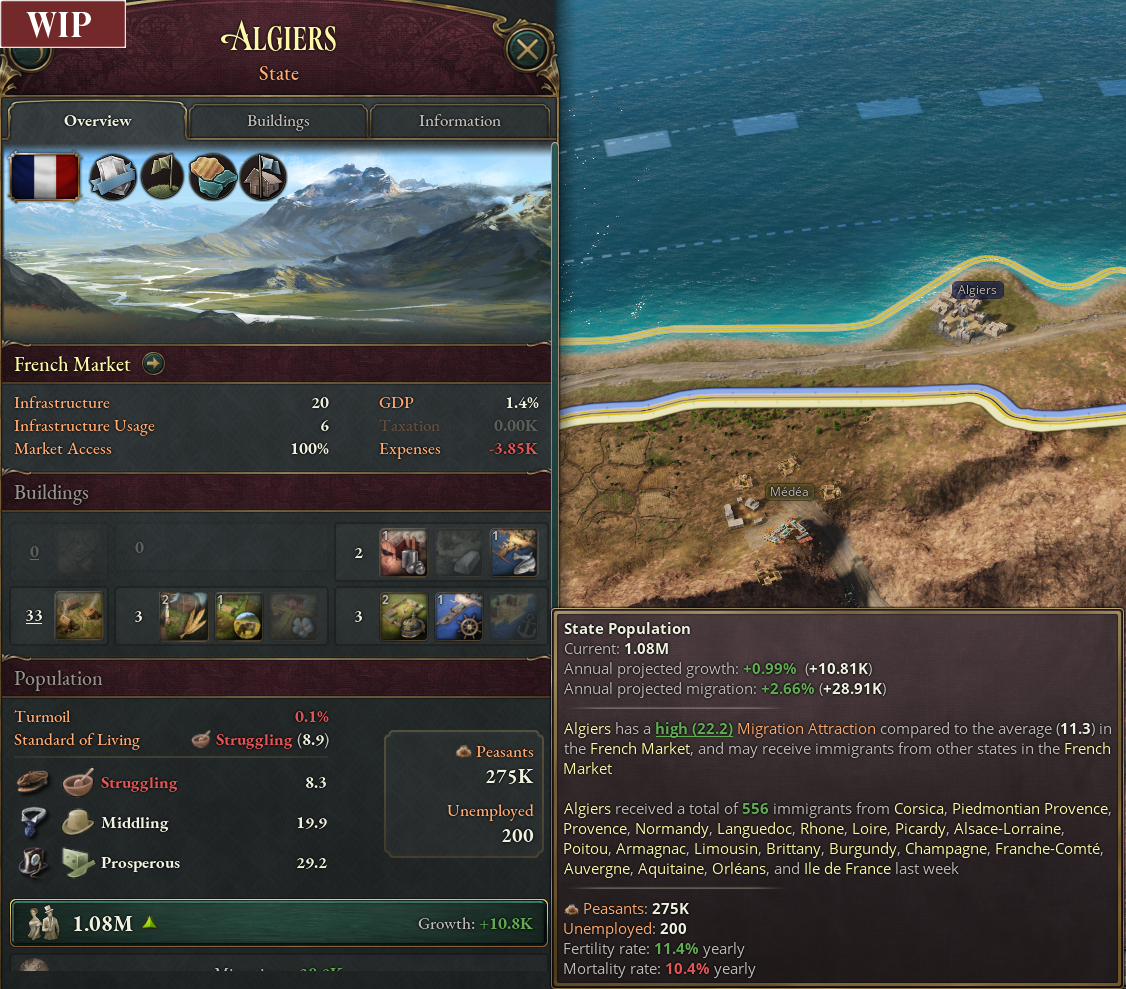 So, what then of Mass Migration? Mass Migration is a mechanic introduced to try and model the migration of large amounts of people to places such as the US, Brazil and Australia in the 19th century. Mass Migration can happen when a particular culture experiences Turmoil, which is a product of having a large number of radicalized pops. A culture that has enough Turmoil to meet the threshold has a chance to create a Migration Target somewhere in the world, which is a flag set on a particular State that attracts huge numbers of migrants from that culture over the course of a limited timespan to that State and any States neighboring it.

The selection of States for Migration Targets is based on a number of factors, including the state’s Migration Attraction, whether or not the culture is legally discriminated against in the country, and if there is a logical ‘path’ that Pops of the migrating culture would be able to follow from their Homelands to the target (such as trade routes). There is no inherent advantage in certain country ‘tags’ for who gets migrants – the US tends to get migrations because of availability of jobs and land combined with liberal citizenship laws, not because they have a built-in migration attraction bonus.

Fed up with economic hardship and political oppression in their homelands, a large group of Polish people have decided to try their luck at a new life in France

There is one more aspect of migration that we’re only going to briefly touch on: Migration Policy. This is a group of Laws which lets you set the stance of your country on migration. For example, whether you want to promote the movement of people from your core lands to your colonies, attract skilled workers from other countries for your manufacturing economy, or even just minimize all migration (external and internal) as a way of maintaining your iron grip over the population. The reason we won’t be going into this today is because it’s currently in the process of being redesigned to this end (from a previous, much simpler set of laws). We’ll try to return to it at a later time!

With that said, we’ve reached the end of this dev diary, and in fact, the end of the current string of politics dev diaries, as next we’ll be changing our focus from inwards to outwards and talking about Diplomacy, on the topic of Prestige and Rank!