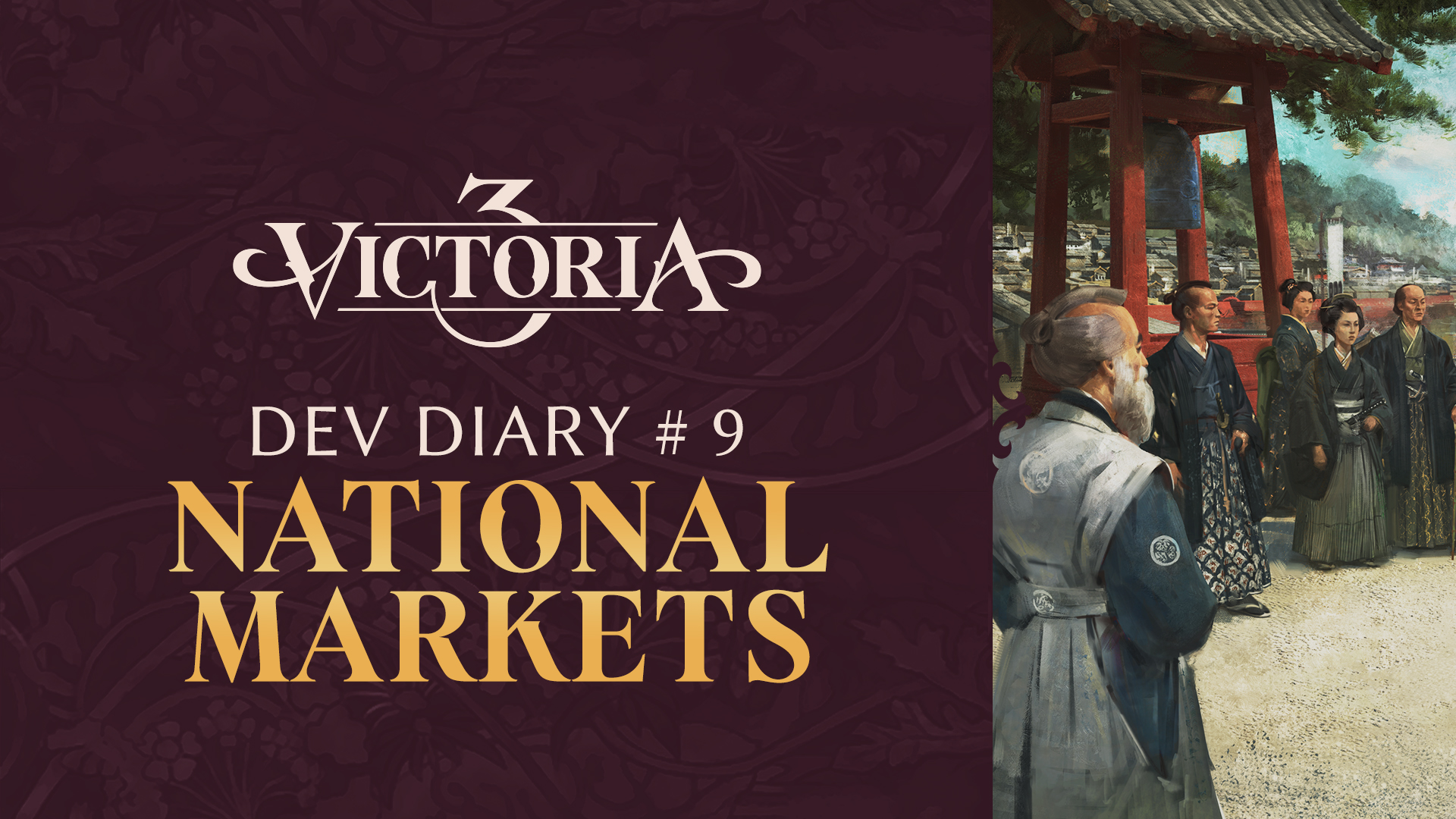 Hello again! Today we will dig into Victoria 3’s National Market system. Markets are what drives the game’s dynamic economy by determining a rational price based on supply and demand for all trade goods in every state throughout the world. Expanding your national market to encompass more territory means more raw resources for your furnaces and more customers for your manufacturing industries. As your industrial base grows, so does your demand for infrastructure to bring goods to market.

The French market is swimming in cheap Luxury Furniture, Porcelain, Fruit, and Meat. Luxury Clothes and Wine are well-balanced. But as far as luxuries go, Sugar in particular has a sizable deficit and securing a reliable source of that would likely result in improved supply of domestic distilled Liquor as well. 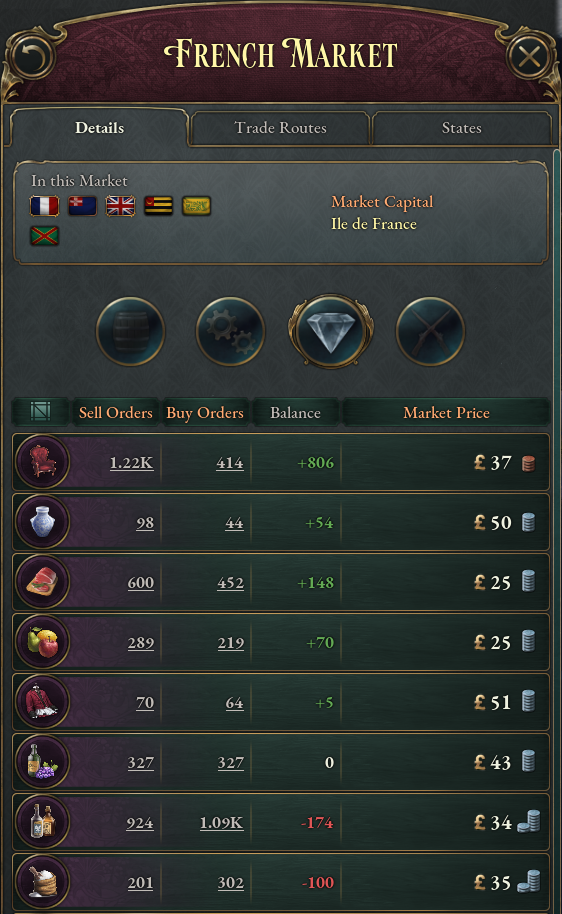 By default every country is in control of its own market which is typically (but not always) centered on their capital state. Every state connected to this market capital – overland or by sea through ports – is also part of the market. These states all have a variable degree of Market Access representing how well-connected they are to every other state in the market. Market Access is based on Infrastructure, which we will talk more about in next week’s development diary!

All local consumption and production in states contribute to the market’s Buy Orders and Sell Orders. Think of these as orders on a commodity market: higher consumption of Grain will cause traders to submit more Grain Buy Orders while higher production of Silk will result in more Sell Orders for Silk.

Furniture is a popular commodity with the growing urban lower middle-class, and it’s not likely its price in the French Market will drop anytime soon. Assuming the appropriate raw materials remain in good supply, upsizing this market’s Furniture industry is a safe bet. 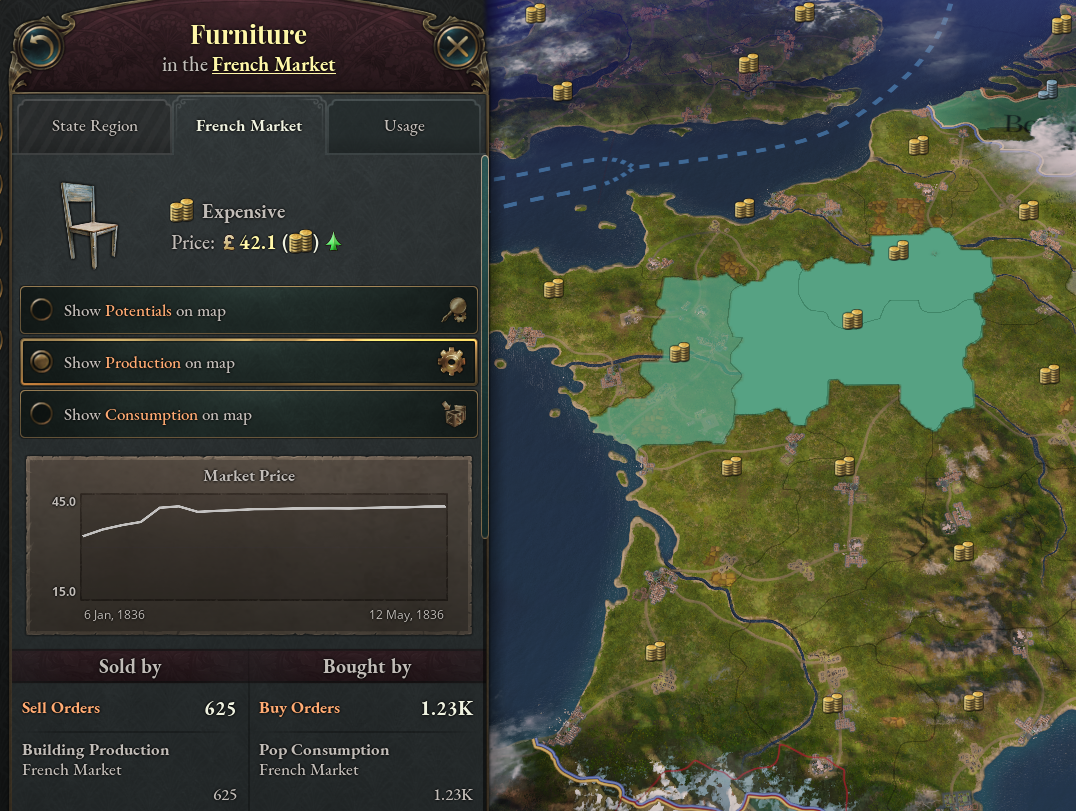 As we discussed in the Goods development diary, all goods have a base price. This is the price it would fetch given ideal market conditions: all demand is fulfilled perfectly with available supply, with zero goods produced in excess of demand. If buildings produce more than is being demanded each unit produced will be sold at a depressed price. This benefits consumers at the detriment of producers. Conversely, if demand is higher than supply, the economy of buildings producing those goods will be booming while Pops and buildings that rely on that goods to continue operating will be overpaying.

When determining prices for goods across a market’s many states we start by determining a market price. This is based on the balance between a market’s Buy and Sell Orders, with the base price as a baseline. The more Buy Orders than Sell Orders the higher the price will be and vice versa. Buy and Sell Orders submitted to the market are scaled by the amount of Market Access the state has. This means a state with underdeveloped infrastructure will trade less with the market and rely more on locally available goods.

Glass is overproduced in Orsha. Coupled with a suffering Market Access in Orsha this means the Glassworks there can’t sell at the somewhat high market norm for their goods. This works out fine for local Pops and Urban Centers who consume it as they get to pay less than market price. But continuing to expand the Glassworks in Orsha will only lead to worsening Market Access for all local industries, and won’t lead to a better price of Glass anywhere else since fewer and fewer of Orsha’s Glass Sell Order ends up reaching the market. We can see this development on the market price chart: the market price used to be high due to low supply, we started expanding the Glassworks in Orsha which lowered the market price, until the point Orsha’s expanding industry became a bottleneck and prices started to rise again. The last few expansions have done nothing to lower the market price even as the local price has been steadily dropping. 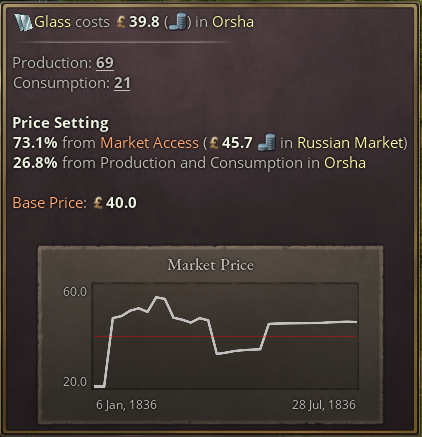 If an oversupply becomes large enough, the selling price will be so low producers will be unable to keep wages and thereby production volume up unless they’re receiving government subsidies. But oversupply is not remotely as bad as when goods are grossly undersupplied, which causes a shortage. Goods being in shortage leads to terrible effects for those in your market who rely on it; for example, drastically decreased production efficiency of buildings that rely on it as an input. Shortages demand immediate action, whether that be fast-tracking expanding your own domestic production, importing it from other markets, or expanding your market to include prominent producers of the goods.

Lacking access to a sufficient quantity of Dyes, this poor Textile Mill can only manufacture 42 units of Clothes this week instead of 126, which is entirely insufficient to make ends meet. Unless something changes, its wages will be cut to compensate and eventually Cash Reserves will run dry, rendering the building inoperable as its workers abandon it. 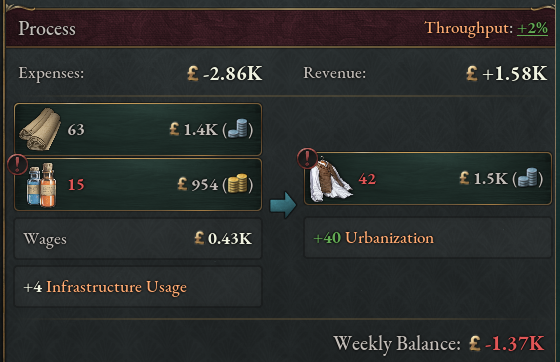 If importing Dyes, growing them on Plantations, or manufacturing them in high-tech Chemical Plants to fix the shortage is not an option, returning the Textile Mills to pre-industrial, low-yield handicraft will remove the need for Dyes and restore the Textile Mills to marginal profitability. 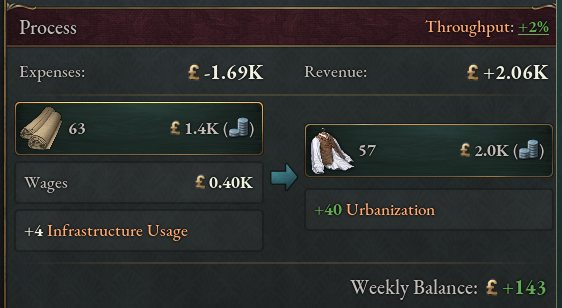 Astute observers familiar with previous Victorias will note there are no goods stockpiles involved in this system. In the predecessor game a single unit of a goods would be produced, sold, traded, perhaps refined, stored, and ultimately consumed, with global price development determined by how many units are inserted into or removed from the world’s total supply. In Victoria 3, a single unit of goods is produced and immediately sold at a price determined by how many consumers are willing to buy it at the moment of production. When this happens prices shift right away along with actual supply and demand, and trade between markets is modelled using Buy and Sell Orders. This more open economic model is both more responsive to sudden economic shifts and less prone to mysterious systemic failures where all the world’s cement might end up locked inside a warehouse in Missouri. Any stockpiling in the system is represented as cash (for example through a building’s Cash Reserves or a country’s Treasury) or as Pop Wealth, which forms the basis for Standard of Living and determines their level of consumption.

As the econ nerds (you know who you are) will by now have intuited, this lack of goods stockpiling in turn implies that in Victoria 3 we have moved away from the fixed global money supply introduced in Victoria 2. The main reason for this is simply due to how many limitations such a system places on what we can do with the economy in the game. With Victoria 2’s extremely restrictive and technically challenging closed market and world market buying order, it simply wouldn’t have been possible to do things such as Goods Substitution, Trade Routes, dynamic National Markets, transportation costs for Goods and so on in the ways we have, either due to incompatibilities in the design, or simply because it couldn’t possibly be made performant. We believe that the complexity, responsive simulation, and interesting gameplay added by this approach more than make up for what we lose.

Finally, a small teaser of something we will be talking more about once we get around to presenting the diplomatic gameplay. As you may have gleaned from the top screenshot, it is possible for several countries to participate in a single market. Sometimes this is the result of a Customs Union Pact led by the more powerful nation but more often it’s because of a subject relationship with a puppet or semi-independent colonies. In certain cases countries can even own a small plot of land inside someone else’s market, such as a Treaty Port. The route to expanding your country’s economic power is not only through increasing domestic production and consumption, but also through diplomatic and/or military means.

The Zollverein, or German Customs Union, is a broad unified market of German states controlled by Prussia. Without such a union many smaller German countries would find their economies too inefficient and trade opportunities severely hampered by geography and lack of access to naval trade. 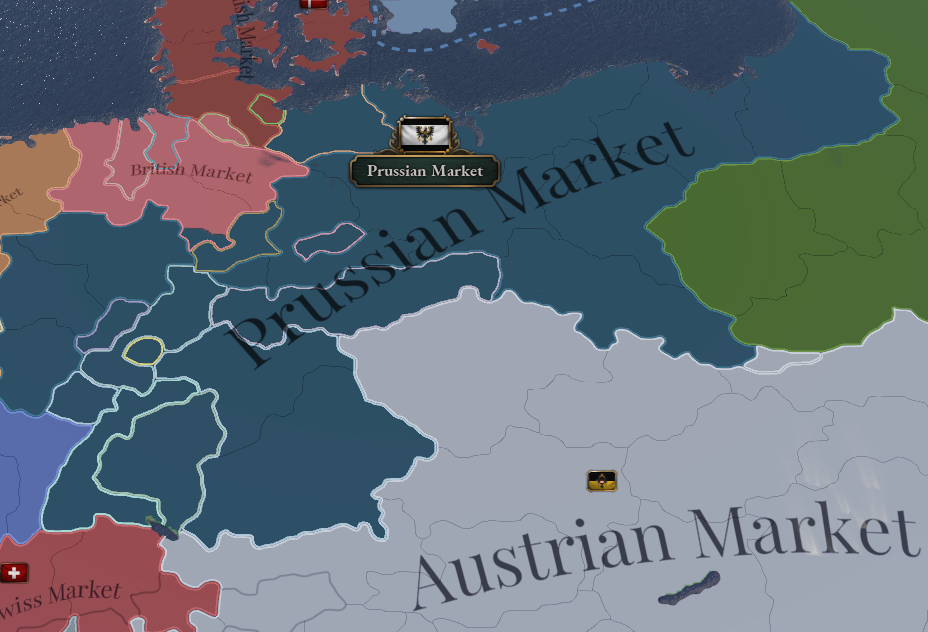 That’s the fundamentals of Victoria 3’s pricing and domestic-trade system! As mentioned, next week we’ll take a look at an aspect of the game that’s closely related to markets and pricing: Infrastructure.